It's a funny old week this week. First off, we have Ian "Professor Clumsy" Maddison professing his love for Dredd, followed by Joseph "Jay Dub" Wade and Sean "Keanu Grieves" Hanson professing the opposite for The Words and [REC]³ Génesis respectively. Then Martin R. "Vargo" Schneider waxes lyrical about Robot & Frank; Joseph "Jay Dub" Wade returns to question why he even saw Branded; and we finish up with special guest reviewer Danny "Sheldrake" Reid watching the film that none of us dared to: The Oogieloves in the Big Balloon Adventure.

EXPECTATIONS: I've said before that 2000AD is the only comic book I have any interest in these days, and the ongoing adventures of Judge Dredd are a continued highlight of the magazine. This is not the first time the character has been given the big-screen treatment - Judge Dredd himself punched Sylvester Stallone in the face for the last one - but this seems like a much smaller, more intimate film. On the other hand, a lot of the publicity shots take place in front of a single bare concrete wall, which looks a little less interesting. 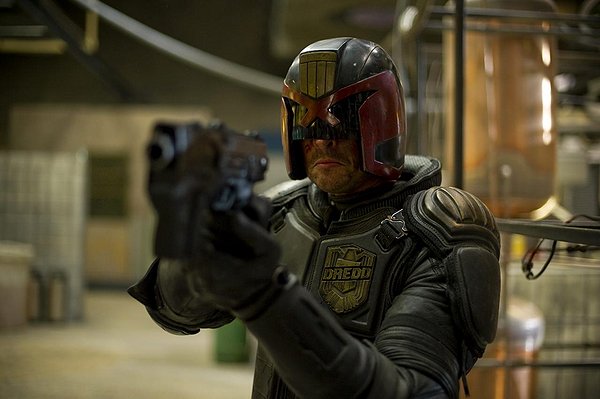 And then he shoots your face off.

REALITY: There's a lot going on in Dredd and it all happens very quickly. The plot is deliberately light, but there are a lot of cinematic ideas in here that are explored very well. It's not a film that pulls its punches or waits for the audience to catch up, it simply rockets along and throws everything at you in the hopes that it will all sink in. If even a small amount of it does, then you'll be glad you gave Dredd a chance. But if you have a weak stomach, you probably won't make it to the end.

In the distant future, America is a wasteland and its inhabitants are packed into the giant city blocks of Mega City One. The city is governed by an all-encompassing force of law: The Judges, a police force with the power to pass judgment, deliver sentencing and carry it out. The toughest of these is Dredd (Karl Urban), who has been lumbered with Anderson (Olivia Thirlby), a young rookie with psychic abilities, for the day. For him, it's just another day in the office; for her, it's the roughest day of her life. When the pair arrives at the scene of a triple homicide in Peach Trees tower block, they find themselves at the mercy of drugs baroness Ma-Ma (Lena Headey) and her hundreds of thugs.

The first thing that will strike you about Dredd is just how unrelentingly violent it is. This is a hard film about hard characters who respond to threats by shooting them in the face. Dredd himself is undeniably a fascist, even moreso than Batman, and we are often left wondering if we should be horrified by his antics or laugh at them. The answer is usually both. When he sets a group of attacking goons on fire we can't help but want to cheer, but when he spends just a few too many seconds watching them burn we start to wonder just what the hell is going on under that impenetrable helmet. Dredd is a character who could easily be the villain, because he performs acts of despicable violence without hesitation or remorse, but his conviction and belief in the law are what save him. Yeah, he melted a guy's head, but it was the law. Sure he didn't need to throw that guy to his death, but he was trying to prove a point about the law. He is the law, after all. The law doesn't discriminate (it does), and neither does he (he does). 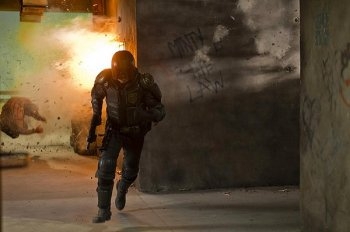 That explosion in the background is just somebody's face getting blown off.Dredd isn't a heroic figure, but he is a very interesting and complex protagonist for an action film. It is established early on that while he may seem to be an emotionless robot, he actually has a lot of issues. We never find out what these issues might be, but it is clear that they have filled him with a lot of anger and an inability to forge normal human relationships. This is what makes his partnership with Anderson so compelling; he views her as overly vulnerable, a trait he is unable to see in himself. This vulnerability is perceived as both physical and emotional. She doesn't wear a helmet because it can impede her psychic abilities, but obviously that leaves her head open to bullets and such. Dredd sees the uniform as his identity, and when he sees Anderson go without her helmet, not only is she allowing herself to be weak, but also she is getting dangerously close to being one of them, an individual. And that brings us to one of the most interesting aspects of the film.

Great pains are taken to give Ma-Ma's goons as much individuality as possible. We are introduced to them in close-ups, and every one is a distinct character. You rarely see a film pay so much attention to the performances of non-speaking roles as Dredd does, and it all pays off. You see, every person in Dredd feels like a real human. They look and act like real people and we are treated to every face, which makes Dredd's actions so fascinating. When I say that he shoots people's faces off, I mean it literally; almost all of the violence in Dredd is facial. That is to say, violence that is committed directly to the face. Cheeks are torn by bullets, eyes are gouged, heads are melted, crushed and exploded, and it is mostly perpetrated by a faceless figure of the law.

Of course Dredd learns something from all this - especially after an encounter with some lesser judges - which is that it's not the uniform that makes the judge, but the judge that makes the uniform. However, this is not the same lesson that we, the audience, are expected to take away from the film. In fact, it feels more like a horror film in its messages, that we the people can never move ahead while government systems exist in extreme terms; good/bad left/right. People are complicated, even a faceless instrument of the law like Judge Dredd. But, ultimately, our individuality is worthless in the grand scheme of things because the regimes and ideals to which certain people devote themselves are absolutely divisive and will eventually cost innocent people their lifestyles. Or maybe there's even more to it than that. There's a hell of lot going on under the surface of this film, and the more I think about it, the more it impresses me. 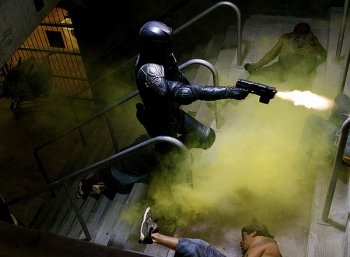 What you're not seeing is the face just off to the right which is being shot clean off.Under the helmet, Karl Urban turns in a stellar performance, proving that you don't need to see an actor's eyes in order to relate to him. There is a humanity to the character that is hard to penetrate, especially given the limited dialogue and emotional range, but Urban makes it feel real. It's the subtlety that makes it work, the tiny nuances in voice and body language, enhanced by the black, reflective visor.

Olivia Thirlby is also excellent, playing off Urban and Wood Harris, who plays a prisoner that the pair carts around with them. Her character becomes empowered through these relationships, and eventually she begins to reflect Ma-Ma with her emasculatory violence, though she directs it toward the "right" people. Ma-Ma herself is also great to watch, Lena Headey proves that she is definitely a more interesting character actress than she has ever had the chance to show. Between this and Charlize Theron's turn in Snow White and the Huntsman, I hope we start to see more over-the-top female villains in action films. Throw some interesting character actors like Deobia Oparei and Domhnall Gleeson into the mix and you have a brilliant cast all round.

At the risk of sounding overly technical, I have something to add about the 3-D effects in this film: They basically don't work. You may have heard rumours of artifacts leaving the frame to enhance the 3-D effect, but that actually only happens once. The film is shot in the 2.35:1 aspect ratio, and in one shot they basically fake a wider 2.40:1 ratio in order to have blood spatter exceed the frame. However, it is much more effective in 2-D because the blood leaves the bottom of the frame rather than exceeding the screen's parameters by hurtling impossibly close to the camera. See it in 2-D, if you have the option.

That aside, there's really nothing negative to say about Dredd. That's not to say that I've run out of things to discuss, but this review is already running a little long. I haven't scratched the surface of the SloMo drug that Ma-Ma distributes, a drug that can only exist in cinema; I haven't even touched on the dark humour that runs through the whole thing... This is a film that will entertain you on a single viewing, certainly, but you will then find yourself thinking about it at length afterward and looking forward to watching all over again. Director Pete Travis has constructed a brilliantly layered, hard-hitting and interesting sci-fi action film that I wish anybody working at Marvel Films had the sheer audacity to even attempt.

MINORITY REPORT: It's been 17 years since Danny Cannon's Judge Dredd. For those who don't remember it, here's why. And if anything in Dredd approaches that kind of badness, I'm going to throw my soda at the screen, beeline to the exit, pull that fire alarm and never look back. And when police ask me why I broke the law, I will say: "I DIDN'T BREAK THE LAW. I AM THE LAW!" And they will have no recourse to my incontrovertibly logical statement of righteousness. - Sean "Keanu Grieves" Hanson