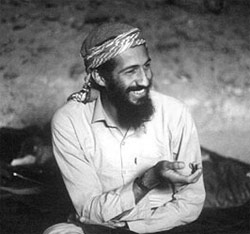 Osama bin Laden, the outspoken activist whose media stunts -- including "9-11" and various widely publicized tapes -- and motivating grassroots organizing made him the most widely-sought man in the world, died Sunday, President Barack Obama confirmed.

He collapsed in his million-dollar estate in the Abbottabad section of Pakistan, about 2PM Eastern time, suffering severe injuries, according to President of the United States of America Barack Obama. He was transported by helicopter to a military hospital in Afghanistan where he was pronounced dead and buried at sea.

"He left his mark on the entire world," strategic expert Cal Houston said. "In his short life he became one of the most famous men in the world and millions listened to his announcements and followed his call to organize and act out."

Bin Laden's blazing rise to stardom is among the most startling of geopolitical tales. Born in Riyadh, Saudi Arabia, bin Laden was a devoted follower of his faith and became politically active at a young age. In the 1980s he became a leading opponent of communism and an ally of the United States. His political movement in Afghanistan succeeded in stunning Soviet planners and hastening the downfall of that regime.

In later years bin Laden would become known more for his attention-getting stunts, including the 1993 pyrotechnics at the World Trade Center and the infamously successful 2001 follow-up.

"It's hard to think of a single man who had more of an effect on this city," said a tearful Luke Lazenby, a NYC firefighter who witnessed bin Laden's 2001 stunt. "We were all there. He brought this city to its knees and we didn't give up. We kept right on going, and here we are ten years later."

The man who once promised "a mushroom cloud over America," Bin Laden was also known as a devoted father of 75 sons, a loving husband to various wives and mistresses, and a caring friend.

"He would give you anything," said a close friend of the family who asked to remain anonymous. "If you fired your last RPG at a helicopter he would give you his to fire. That is just the sort of man he was."

Memorial services broke out spontaneously around the United States upon hearing the news. Grown men high-fived, chests were bumped, mourners gathered outside the White House and at the site of previous bin Laden stunts. A crowd at a Mets game began chanting U-S-A, confusing the Mets who briefly thought the chants meant they were losing to the USA.

Friends of bin Laden announced plans to carry out his wishes to "avenge the slaughter of Muslims by Americans a thousandfold and drown [Americans] in the blood of their sons."