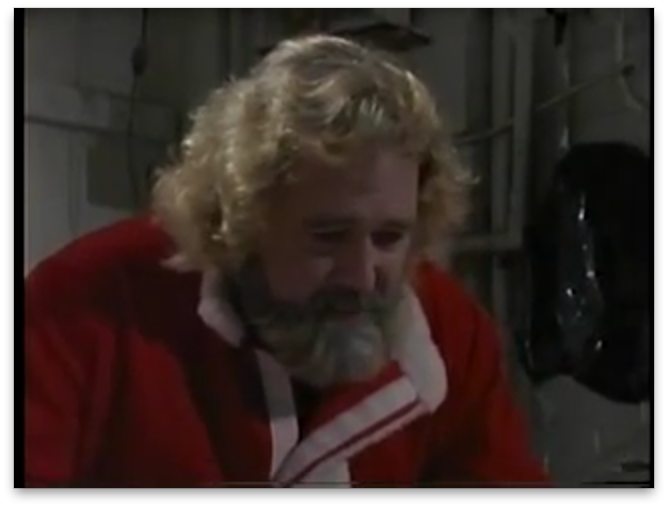 By this point Mike's curiosity is understandably pretty piqued, what with the whole "Fourth Reich and their weird moist little troll assassins popping up in the sporting goods section and trying to kill Santa" thing. He puts his formidable detective skills to work, and within a couple hours he manages to track down not one, but two "elf experts" willing to help with his predicament at dinner time on Christmas Eve. By the way, did you know that elves are mentioned in the bible, and that the Nazis experimented with using them as invincible super soldiers? Or that when an elf mates with the genetically pure virgin on Christmas Eve, she gives birth to the anti-Christ? Also, that 'anti-Christ' is another way of saying 'unholy Nazi incest rape baby?' Man, the stuff you can learn with just a library card these days. One of the Elfologists or whatever even blurts out this little gem:

MIKE: Do you think that I'm a crackpot?
ELFOLOGIST: Oh...are you asking if I believe in elves? No...but God did!

Before Mike can share any of this riveting top-secret gibberish, yet another random Nazi tries in vain to send Mike off to unkempt holiday mall mascot purgatory, but he's not prepared for a hearty dose of Santa's patented dynamite surprise!:

Meanwhile, Kirsten is enjoying her Christmas Eve safe at home in the company of her wheelchair-bound and not-at-all-suspiciously German grandpa, who is (also not-at-all-suspiciously) frothing at the mouth about elves and the master race and so on, probably trying to do his best impression of Dr. Strangelove if Peter Sellers had played him as an incestuous eugenics crusader who'd just finished slurping up a slop bucket full of bath salts. Kirsten's mother shows up to give her the early Christmas present of indelible psychological trauma by revealing that her grandpa is also her father. (Because something something Elfpocalypse something genetic purity something MEIN FUEHRER!) Grandpa-dad tries to reassure Kirsten by telling her "You are beautiful and perfect and I love you!", which, given the context, seems just the tiniest bit inappropriate.

Headbanging to bathtub electrocution is pretty goddamn metal.Needing to unwind after dropping that life-ruining little genealogy nugget, Skele-mom excuses herself to enjoy a nice hot bath, which she prepares for by caking on more makeup than the Joker at a drag show and placing high-voltage appliances precariously around the tub. Little does she know that both makeup and electrocution are potent aphrodisiacs for elves:

At this point the whole movie starts to unravel, which is really hard for us to say since it implies that there was ever anything coherent about it in the first place. Mike and Kirsten confront her (grand)dad, who breaks down and gives them some crappy magic rock and a cryptic "you vill know vat to do" speech while doodling swastikas over the nipples of some random naked-lady pencil sketch (yeah, we wish we were kidding too). Some more of the seemingly endless disposable Nazis appear out of nowhere to witness the impending elf rape - which on the German porn spectrum is still somewhere between G-Rated and softcore heavy petting - and Herr Doktor-Dad finally ends up on the wrong end of his own Luger. Oh well, you know the saying - no use crying over spilt Occult Nazi Rape Wizards.

Following a fight and chase sequence that's almost as boring as it is baffling, Kirsten ends up stranded in some dark forest with the head Nazi, who is not a cryogenically preserved, time-traveling, or genetically reconstituted Hitler. Bummer. Long story short, the elf shows up and blasts not-Hitler with grandpa's Luger. What made him suddenly turn on his deutschy friends, you ask? This is one of the many, many questions that this movie will never even come close to trying to answer. Instead, a long and (dare we say) passionate staredown between the elf and Kirsten ensues. Before they can even get to second base, Kirsten's little brother runs back into the movie with the magic rock/paperweight, and then...then...

By this point the editor must have been higher than Wiz Khalifa polishing off a blunt the size of a golf club, because the WOOSHing & visual mindfuck effects just keep going like that for awhile, until, just when we start to think that they've all been sucked into Dimension X, the sun rises. The end. But the inexplicable assault on the senses doesn't stop here, oh no, it continues into the incredibly obnoxious closing credits, which consist of a shot of a (presumably half-elf) fetus and nothing but the sound of a heartbeat in the background.

We can only assume the implication here is that our singular half-human elfen rape-child will beget others, which even we have to admit is a chilling thought. After all, nothing says "invincible army of super soldiers" like a bunch of disgusting little mucousy oompa-loompa things barely tall enough to operate doorknobs running around with tunnel vision and eyeballs made entirely of vaseline, right? Right?! Okay, maybe not. At least this is only the second worst Christmas movie ever made.