Overview: Bored teenagers call each other names and lie about giving each other venereal diseases...on the Internet. For some reason this is very mysterious and dramatic.

The Case For: Provides the perfect justification for your hermit-like avoidance of all social media websites, including Facebook, Twitter, and that Geocities page your uncle put up with all of your naked baby pictures and animated cherubim clipart links to inspirational MIDI songs.

The Case Against: Possible side effects include: paranoia and distrust of all technology; inability to distinguish reality from melodrama; contempt for all forms of social contact; massive subdural hematoma; and suicidal ideation. 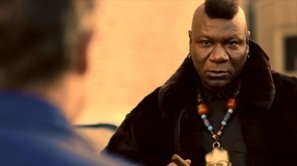 The Internet is a strange and confusing place, full of horrible perversions and deceptive acronyms, and nobody except for teenagers and wild-eyed autistic savants could ever hope to understand how any of it actually works. This is the premise that pretty much any movie involving computers would begin with a decade or so ago, anyway (the infamous ".com for Murder," for example). Fortunately, most of the world has grown out of being awestruck and terrified by the Internet, and now we're all happily Twittling and Instagabbing away as naturally as any of that other boring analog stuff we used to do, whatever that was. There are even a few movies and TV shows that have managed to incorporate these brave new types of media in clever/interesting/tolerable ways, amazingly enough. But as you've probably guessed by now, this movie is not one of them. And so, somehow, in the year of our lord 2011, emerged Cyberbully, a deeply moving and tragic film about the unfathomable terrors of teens using websites to commit unspeakable atrocities like calling each other fat and stuff.

The movie opens on the dessicated plains of Earth 1.0, a bleak and ravaged landscape sprawling lifelessly under the blackened horizon. Ash and soot fall from the sky, so thick at times it is difficult to see much of anything else. From out of silence and nothingness, a warm but cautious voice rises up to greet us. It is a familiar, soothing voice, thick with notes of age and wisdom. Indeed, it is Golden Globe-winning Hollywood superstar Ving Rhames, our narrator. He speaks - a dulcet but commanding tone - and begins to tell us of the horrifying events that have led us to this miserable, lifeless place. Humanity, he explains, has long since abandoned Earth's surface, moving deep below its crust to survive, to shelter its children's fragile futures, not from global nuclear holocaust or cataclysmic climate events, but from Them. The Enemy. The eponymous Cyber Bullies.

In this new epoch of cyber spheres and hyper-trilla-speed global networked hive-think, the Internet is, as one might expect, the true battleground of the human soul - a vast and protean meta-reality where bits and bytes and flops are exchanged as ideas and currency, passed around like little pouches of black-tar heroin through seemingly innocuous yet colorful hand gestures in some dreary prison exercise yard. Welcome to hell. Welcome to...the Internet.

Alright, so we might've embellished a few minor details here and there, maybe fudged a couple really pretty minor things RE: genre/story/Ving Rhames' involvement, but to be fair, most of that crazy shit would mak 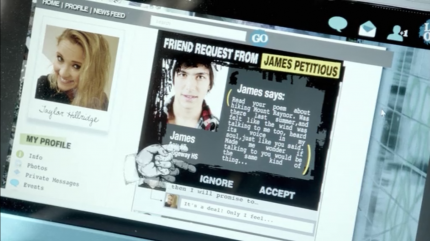 Hi YoLo_Jo$h420, you've received a swirly from 666xD4RK_SL4Y3Rx999! [[Like | Thumbs up | Give e-lunch money]]e for a way more coherent and accurate depiction of contemporary social media than anything you'll find in Cyberbully. Case in point: "Cliquesters." What the hell's a "Cliquester," you ask? Why it's the grittier, more in-your-face, noticeably less copyright-infringing ersatz Facebook where the painfully white and irrelevant teens of Anytown, USA go to call each other names like "lardo," "smelly sewer butt," and "dirty sex liker" of course! No, seriously, that's what it is. Sounds pretty harmless, right? Wrong, you insensitive idiot son of a bitch. It's society's worst nightmare - a tool of mass destruction that is to fragile adolescent self-esteem what Godzilla is to those crappy little particleboard models of downtown Tokyo.

Our protagonist, Taylor, gets her very own newfangled computing machine from her ice sculpture of a mother for her birthday, and immediately signs up to "Cliquesters," which, like most major social communities online, requires you to enter what color underwear you're currently wearing, your home security system password, and what times you generally shower alone to register. Within a week or so of signing up, Taylor manages to fall in love with a complete stranger for no apparent reason, have her account hacked by a 12-year-old, go from spoiled megalomaniac to hopeless social pariah literally overnight, become the target of a twisted pseudo-Shakespearean revenge plot by one of her best friends, and carry out the worst suicide attempt in recorded history[1]:

[1] Cyberbully Prevention & Response Tip #12.a-d:ii - Do not, under any circumstances, attempt to consume prescription medications without the supervision of a parent, doctor, or reasonably well-kempt legal guardian; prescription medication bottles are armed with caps designed by NASA and used as anti-tampering countermeasures by US Military Intelligence to ensure unauthorized individuals cannot remove them. If you try to get the caps off of these bottles, not only will you be unable to, but also the resulting physical exhaustion could leave you extremely dehydrated and vulnerable to counter-attack.