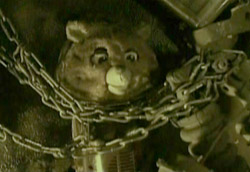 Okay, I realize the movie's bad and all, but seriously, a fucking Teddy Ruxpin doll?After finding a hidden passage in the room Stryker finds that he is in the grasp of an Evil Cult. They are so evil, in fact, they like to construct high-school haunted house-looking rooms in secret compartments under their house. To use the high school analogy again, he finds a leather-bound book that may well have been Satan's high school sketch pad - the camera focuses on one page of the book, which features a crudely-drawn stick figure being tortured - and a room full of even more bad actors, who are wearing wigs and trapped in little cells in the basement of the house. At some point he is also harassed by an antagonistic Teddy Ruxpin doll. I wish I was kidding.

If I can mention voices again: "Evil Cult" is full of bad ones. Horrible ones. Imagine being stuck in an elevator with a coked-out Dana Carvey and you'll have experienced some semblance of watching "Evil Cult." Of all the characters, only two don't speak in some sort of overblown, horribly-done accent, and even those two characters are pretty fucking annoying in some way or another. Stryker befriends a caged-in retard named Winston (Kyle Day), who tells him the cult's story.

Taylor brothers, if you are reading this, I have a couple of tips for you. Assuming you're not too busy posting on the Ain't It Cool News forums about how fucking awesome "Evil Cult" is, I hope you take the time to read them.

Here's the thing about evil cults: They don't like it when you discover their secrets. After a few botched escape attempts Stryker again finds himself in the clutches of the evil Walter, who plans to use a laser to "melt his brain like the rest of them." I can only assume "the rest of them" are people who opted to pay for this movie, since you'd have to have a melted brain to front them the $75 they needed to make it. Of course, of that $75, a good $25 of it was spent registering for various Web sites to promote Evil Cult, but that still leaves $50 that could be better spent on things like black tar heroin or microwave popcorn.

Here's where the movie turns from "forgettable bad" to "throw the DVD like a Frisbee and pray it doesn't decapitate an old person because it's just terrible enough to do that" bad. Stryker manages to break free of the table he's strapped to without any kind of explanation. Okay, I can deal with that. He rips the "mind melting" laser gun out of the ceiling and starts firing it. A little more implausible, but whatever, I'm not splitting hairs with such a shitty movie. He kills a few people, then finds a dial with some numbers on it. After setting it to the arbitrary setting "50" he finds that this laser, although ripped from its power source and still firing, suddenly becomes powerful enough to turn people into CGI skeletons.

Not that it matters. Shortly after a brawl with the retards (who manage to escape from their cages long enough to be in the most repetitive fight scene in cinema history), Stryker finds himself smack-dab in the middle of a graveyard during a "Zombie Stimulant System Activation." We know it is, in fact, a Zombie Activation Sequence because yet another shitty CGI montage shows glowing blue liquid going through pipes with that text under it.

Unfortunately, things don't go very well for Stryker while he is fighting the zombies (who look almost exactly like the escaped retards from earlier). He is dogpiled by the malicious creatures, and almost succumbs to their evil will, when Winston shows up out of nowhere and throws him a vial of some glowing pink potion they showed for about five seconds earlier in the movie.

And here comes yet another huge shift in the movie. After the whole "laser gun" thing, I was pretty sure it couldn't get any worse. Then, Stryker drinks the potion, and it does. To use another analogy: Imagine you just got a puppy. It's cute and all, but you come home from work one day and you see that it's destroyed everything. It shit on the bed, peed on the rug, and tore up all your furniture. You're mad, but you clean the mess up and write it off, then you come home the next day and find that the dog raped and murdered your wife.

In short, the potion really sums up what's wrong with the whole movie. Stryker drinks it and his hair turns pink. His eyes turn red. He shoots pink lightning bolts from his hands. He screams really loud.

In case you're not getting this: The main character of "Evil Cult" essentially goes super saiyan. And it's not an ironic thing. In the background guitars wail and a rapper belts out the most awkward rhymes I have ever heard - one line is something like "do you hear what fell / it's Neil Stryker falling from Heaven to Hell, bitch" - while Stryker pulls a sword literally out of nowhere and starts cutting zombie heads off.

After yet another boring fight scene, this one between Stryker and Walter in front of the most obvious blue screen scene ever, several other Strykers come out of the same portal the mad scientist did in the beginning of the movie. Everyone battles with pink and green lightning bolts and Walter eventually falls over. They chop him up and bury him.

Okay, you know where I was talking about the dog earlier? Well, it's not over. After all the other bullshit, imagine the dog called the police and admitted to the crime as if he was you, then told the life insurance guy not to worry about the policy because death isn't about money. Stryker sends the other Strykers back through the portal and gets in a truck, where the mad scientist appears. He says there's a bomb under the seat. Does this mean the truck explodes? Of course not! This is a Taylor brothers movie and those guys are just too damn good for things like "plot" and "continuity." Instead of that explosion, poison gas suddenly fills the truck, although the scientist clearly says "the truck will explode if you move." He teleports away and Stryker dies.

Surely that's it, right? I mean, the Taylor brothers might not know how to make a good movie, but surely they know when a movie is unraveling like a ball of really shitty yarn. If you're thinking that, you're wrong.

In the movie's final minutes, Stryker finds himself in Hell with one of the murdered cultists. She asks him to join her in hell, to which he responds with the worst line in the movie:

He then proceeds to pull what looks to be an ice gun from his bag and frost the screen over with it. Cue shitty rap song and credits. And that's the end of the movie.

But that doesn't mean the review is over! Oh, no. I've got a treat for you all! I managed to snag a 100% accurate, honest-to-god not-made-up interview with the Taylor brothers. It's short but I think they deserve a chance to defend themselves.

Pantsfish: Thanks for the interview on such short notice, guys.

Rob Taylor: No problem, man. I was just finishing up rough incestual sex with my brother in the back of this car.

Neil Taylor: Hey, it's not just a car! It's our house!

Pantsfish: That's great, guys. So, what inspired you to make "Evil Cult?"

Neil Taylor: Lots of things. "The Evil Dead," of course, but obviously you know that since the only good parts of our movie were ones we stole from that movie.

Rob Taylor: Anime, too. And cocaine.

Neil Taylor: Yeah, lots of cocaine. We snorted it out of each other's asscracks.

Pantsfish: That's great, guys! Thanks for the interview!

See how easy it is to make things up on the Internet, guys? Hopefully more people believe what I just wrote than they did those bullshit reviews.