The onslaught of violent movies continues this week with Bullet to the Head and The ABCs of Death; the onslaught of teenage fantasy romance also endures, with Warm Bodies. Finally, we take a look at 2012's Oscar-nominated short films.

Bullet to the Head

EXPECTATIONS: Walter Hill is back with his first feature film in ten years! This is the guy who directed The Driver, The Warriors, Southern Comfort, 48 Hours. He's America's forgotten filmmaker, but his influence can be seen everywhere: It's in the works of Nicolas Winding Refn, Edgar Wright, Sam Raimi and even Kevin Smith. The point is, he's back and he's working with Sylvester Stallone. How could you not be excited by this?

REALITY: Bullet to the Head really should have been better. We're in the middle of an action-movie renaissance, and when one of the guys who revolutionised the genre steps back up to the plate, we kind of expect him to blow us all away. Instead, we get an incredibly generic action thriller. There are some good ideas in here and a lot of well-crafted and intimate set pieces, plus some great chemistry between the two leads and heaps of humour, but it still feels like a missed opportunity. 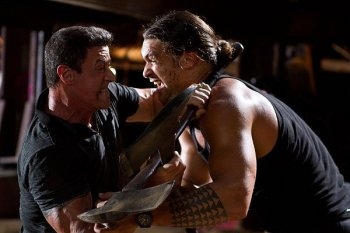 The old Sly Stallone versus the new Arnold Schwarzenegger.Jimmy Bonomo (Stallone) is a hired killer with a silly name who is getting sentimental in his old age. When he decides not to kill the only witness to his most recent hit, he sets a nonsensical plot in motion. His partner Louis (Jon Seda) is shortly dispatched by Keegan (Jason Momoa), another hired killer. Somehow, WDCPD detective Taylor Kwon (Sung Kang) manages to track Jimmy down with this limited evidence and now the pair are forced to work together to bring down over-zealous property developer Robert Nikomo Morel (Adewale Akinnuoye-Agbaje). It's basically the same unfathomable plot as Jack Reacher, just better executed.

Property developers make for easy movie villains at this point; they're basically Nazis. I think it's interesting that, presumably as a result of our current economic situation, presenting a character who will do anything in the interests of developing properties is a surefire way to get audiences to boo and hiss. The best part is that you can now present these characters in as outrageous a way as you like. You can take Werner Herzog and cut all his fingers off or take Adewale Akinnuoye-Agbaje and give him an African accent and a couple of walking sticks. Just get an immigrant, make him disabled and give him a job as a property developer and you've got the new Hitler. What is the reason for this? Is it a distaste for people who control the failing economy? Why, then, does it manifest itself so readily in the guise of disabled immigrants?

First off, I suspect this all stems from some idea of what Americanism actually is. Bullet to the Head and The Last Stand both operate around this idea. America is built on immigration, but there's some expectations about how those immigrants are supposed to behave. "I am an American now," they are expected to say. "Do with me as you please." Characters like Morel here, The Zek in Jack Reacher and Cortez in The Last Stand represent the bad immigrants who come to America in the hopes of continuing their own interests. These people are hoping to change America either philosophically or literally to fit their own designs. That makes them a domestic threat, the new big bogeyman now that America's real-life superpower nemeses have been eliminated. As for why Morel and The Zek are disabled... what's more un-American than someone who contributes nothing physically, but can manipulate people with money? America was built on hard work, damn it!

They're not really "buddies" per se, but they get fairly chummy. It's a chum movie.

Both The Last Stand and Bullet to the Head balance this by representing a heroic "good immigrant" to face off against the bad guys. In this case, Korean-born Taylor Kwon is a morally upright detective who, in spite of assisting Bonomo in his quest for vengeance, is determined to follow the letter of the law and take Jimmy in when it's all over. In the case of The Last Stand, it's Arnold Schwarzenegger himself standing off against a Mexican criminal to stop him leaving America. "You make us immigrants look bad," he says entirely without irony. That's what makes The Last Stand the best American action film since The A-Team and makes it stiff competition for Bullet to the Head. What makes Bullet work is a very slight subversion of this idea, between the opportunistic Morel and the optimistic Kwon is Bonomo, the American who understands how things really work. He's not trying to change anything or give himself over to the greater good. He's in it, he's living it everyday and he solves all of his problems with a gun. Unfortunately, it doesn't quite go far enough with this subversion to feel new.

That's enough on the current trends of American action films. Let's focus our attention on this specific one. What really makes Bullet to the Head stand out is the action itself. We all know that Walter Hill is no stranger to blocking and shooting an exhilarating action sequence, and he has clearly not lost his touch. Short fight scenes like an early confrontation between Bonomo and Keegan in a toilet cubicle are more intimate, powerful, frightening and memorable than we would ever expect them to be. Every punch is teeth-rattling and every gunshot is terrifying. People don't fly through the air with exploding blood bags in their chest in this film. Here, getting shot looks painful and leaves holes in your flesh. Rather than sensationalising violence, Bullet to the Head gives a certainty and finality to its shootings and stabbings and then offsets that with the typical wisecracks. We like these characters, and we cheer for the intent behind their actions and yet we cannot help but feel appalled at the reality of receiving several bullets to the forehead. It's an interesting, even refreshing, dichotomy. 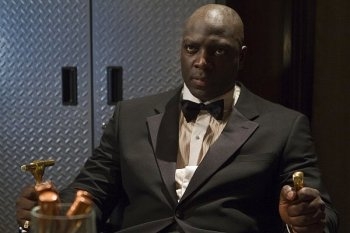 Watch out, America, it's a disabled immigrant property developer.For Stallone, this feels like a very personal role. As Bonomo narrates the prologue, he recites the bad things he has done and all the times he has been arrested while the film employs a series of mug shots taken from throughout Sly's life. I'm sure a lot of them are from costume fittings from his various films. A photo of him with his Rambo: First Blood Part II hairstyle got a big laugh from the audience. It feels like Stallone is simultaneously atoning for a career of misfires and then unapologetically moving forward into the potential of more to come.

At its heart, Bullet to the Head is a buddy cop movie. It's 48 Hours all over again, and that's where it begins to feel a little old-fashioned. It's like Hill took this idea and said, "Well, this is how we made them in the '80s, so let's just do that again." The only missing elements here are an angry black police captain and David Patrick Kelly as a low-level bad-guy (what should be his role is occupied by Christian Slater, who is clearly having a whale of a time).

Hill can still deliver the laughs and he can still direct the hell out of an action scene, but there's no evidence here to suggest he can still spin a yarn like he used to. The spark is still there, but I don't think this is the best he can offer. I do hope he's back for good, though, because there could well be some new classics burning away inside him and he's exactly the man we need on-side for the action movie renaissance. Bullet to the Head is good, but it just isn't new.

MINORITY REPORT: I'm pretty sure real estate developers have been bad guys for a very long time, the most noteworthy being Lex Luthor, who actually fought AGAINST an illegal immigrant, knocking your theory on its ass. - Martin R. "Vargo" Schneider