It's tough to explain exactly what's going on in Inseminoid but essentially Planet X is home to some ancient ruins, which conceal some sort of crystal, which contains some kind of alien intelligence, which manifests itself as some type of creature. I wish I could tell you where the creature comes from, or how it survived for tens of thousands of years, or why it attacks one of the scientists for about three seconds, literally ripping his limbs off, only to disappear entirely for the rest of the film. We don't get to see this unstoppable killing machine creature much, except when it's impregnating poor Sandy, but since its head looks like a sixth-grade art class's papier-mache project, perhaps that's for the best.

That's right, the formative scene in Inseminoid (as the title coyly hints) is an alien operating-table sex scene. It's mercifully brief and is presided over by the research team's doctor, although his role having jackshit to do with the aliens is never described. Nor is the fact that after Kongo the Space Pimp gets his rocks off, he vanishes from the film altogether.

I could fill a couple of pages here with the brainless meanderings of the plot, which shifts direction with glacial speed, but I'd rather take this time to pass on a few things I learned from Inseminoid:

Many space monsters have glass bongs for dicks. I submit the video still to the right as visual evidence. 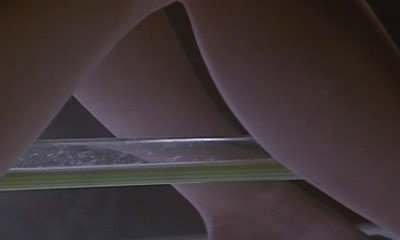 If you want to film a sci-fi movie on a desolate wasteland planet, go out to the nearest sandpit and tape red cellophane over the lens of your camcorder. It's cheaper and faster, and your risk of jamming a tube in your piehole and sawing off your own foot is dramatically lessened.

The future is filled with the relics of today. Vital mining supplies are carted around in coffee dispensers. Explosive grenades are carefully housed in Silly Putty containers. I did get a kick out of the spacesuits, which draw inspiration equally from Forbidden Planet's Robbie the Robot and Spaceballs' Dark Helmet.

Once Sandy's carrying L'il Kongo, the bulk of the film consists of:

Sandy does the best job of acting in the movie, although I'm reasonably certain I could roll into any hospital for the developmentally disabled, pick a patient, and talk him through alternately begging for company and flipping the hell out. Here we see Sandy channelling She-Hulk as she aggressively redecorates the storage hangar. Note her costume, a sly nod by Sir Run Run to the unique cultural longevity of Wrangler jeans. Sandy's the only one who really throws herself into the part, as evidenced by some of the screams she busts out in the second half.

Sandy does eventually give birth to little goober alien twins, who look like Jabba the Hutt met up with Quato from Total Recall and had a few drinks before getting down to bumping uglies. In a shocking "What If" finale, a rescue crew arrives, finds everyone mutilated, shrugs and departs, unaware that the l'il munchkin aliens are cunningly stashed in a milk crate. Imagine the possibilities! Or don't. In fact, keep imagination as far away from Inseminoid as possible, since the introduction of creativity and thought to this movie could prove fatal to its fragile ecosystem.