While Ian "Professor Clumsy" Maddison gets to peer into the futuristic wasteland of Oblivion, the rest of the Current Releases crew reminisces. 42 transports Martin R. "Vargo" Schneider way back to the days when Jackie Robinson destroyed racism. Joseph "Jay Dub" Wade recalls growing up in a town very much like the one in The Place Beyond the Pines. Finally, Sean "Keanu Grieves" Hanson flashes back to last week for the oh-so-timely references made in Scary Movie 5. And believe it or not, some of these movies are actually worth remembering.

EXPECTATIONS: This is one of those films about which I'm not entirely sure how to feel. There are so many incredible shots in the trailer that I just want to sit and marvel at, but it doesn't really give you any idea of just what this film is. "The people you're working for lied to you," insists Morgan Freeman. About what? We don't know. For what reason? We don't know. Hopefully, it's going to be worth the effort of finding out.

REALITY: A lot of people's preconceptions toward this will depend on how they feel about director Joseph Kosinski's previous work Tron: Legacy; as you might recall, I didn't much care for it. In spite of its impressive visuals, Tron: Legacy never felt like it had the strength of its convictions to fully explore its lofty intentions. Oblivion is a much more mature film and feels a lot bolder. It's like Kosinski begins by saying "Forget Tron: Legacy, let me show you how much I really love this sci-fi stuff" and then, in the same breath, brings up a whole host of fascinating avenues for exploration.

After an apocalyptic war with alien creatures known as Scavs, almost all of humanity's survivors have been evacuated to an orbital station. Enormous refineries collect Earth's water supply, which, once the process is complete, will be taken to Titan where life can begin anew. To defend these refineries, robotic drones patrol the planet's surface. Charged with maintaining these drones are Jack (Tom Cruise) and Victoria (Andrea Riseborough), seemingly the last two humans on the planet. They're also lovers, but Jack frequently dreams about Julia (Olga Kurylenko), a woman he swears he can remember from before the war, even though his memory has been wiped to protect the secrets of his mission.


That's an elaborate way to set the scene without giving too much away. There are several twists and turns involving a crashed spaceship and the appearance of freedom fighter Malcolm Beech (Freeman) who has plans of his own for Jack, but to give too much away would detract from the enjoyment sci-fi fans might have spotting all of the influences for themselves. There are elements of Star Wars, I Am Legend, 2001: A Space Odyssey, The Planet of the Apes, Blade Runner, Alien and even a little Silent Running for empathy. I could sit here all day pointing out Oblivion's visual quotes and borrowed plot devices, but to do so would spoil the film many times over.

Maybe I just have a soft spot for the genre, but I can't help but find Oblivion's reverential retreading endearing. Every step this film takes is firmly within the footprints of many that have come before it. However, like a child following precisely in his dad's oversized shoe impressions on a sandy beach, there's a sense of wonderment and exploration to Oblivion. This familiar cavalcade of references ultimately generates original ideas, thanks in part to the film's eye for believable humanity.

Throughout the film, relationships are irrevocably altered by revelations. In the first act, Jack comes across like a guilty husband, keeping secrets and living a second life hidden from his partner/lover Victoria, but this perception of him changes as he learns about himself. As played brilliantly by Riseborough, Victoria's reaction to a major change in Jack is understandable, but not ideal. At times characters behave antagonistically; not through evil intent, but because it is human for them to do so. Oblivion draws comparisons between the confusing motivations of emotional humans and the calculated motivations of unfeeling robots, concluding that neither men nor machines really understand themselves. 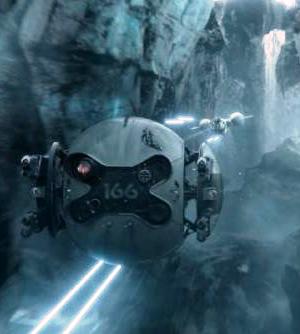 In this live-action remake, Tom Cruise plays Wally, a man left behind on Earth to murder all the robots.

The drones are interesting characters in their own right, realised through a bizarre aesthetic - they are basically white balls of death with frowny faces on them - and a marvel of sound design. Their deafening horns and beeps leave you never really knowing if you should be terrified or reassured by their presence. Jack is clearly uneasy around them. In an early scene, he goes out of his way to repair one and is immediately threatened by it; he never knows if these things are just going to obliterate him at a moment's notice. They are frightening, but there's a clumsiness and single-mindedness to them that makes them hard to fully hate. And indeed that is the point, for they are incapable of hate themselves: They merely shoot targets. Oblivion is preoccupied with the old Star Trek idea of just what it is that makes us human.

This is not really an action film, though there are a few major set-pieces (one of which is gleefully reminiscent of Robocop). Rather, it's an intimate human drama played out against an epic, visual effects-laden backdrop, and the cinematography reflects that perfectly. Every frame of Oblivion is meticulously constructed. Wide shots give way to close-ups in single glorious movements. Even during sweeping helicopter shots, there's a certain beauty to the stillness of ruin and devastation.

Ultimately, I think your response to this film will depend on what you take into it. Oblivion is a real treat for sci-fi fans like me, but some viewers might find this kind of relentless homage tiresome. On the other hand, if you haven't seen or read any of Oblivion's predecessors, then the whole thing might well feel completely fresh to you. It works as both a love letter to the genre and a good jumping-on point for genre newcomers. I'd say that Oblivion is to sci-fi as Insidious is to horror.

MINORITY REPORT: That trailer you linked does many things right, but the biggest one is starting off with the opening riff to "The Weight." Fact: I will watch literally anything if you include "The Weight" in it. This movie could consist of Tom Sizemore sitting in a McDonald's ball pit and crying for ten minutes, set to "The Weight," and I'd still give it three stars. - Martin R. "Vargo" Schneider