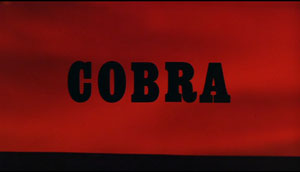 Overview: “By the way, this was based on a book, this movie. But it was all changed by Mr. Stallone, he rewrote the script. Thank God.”
- George Pan Cosmatos, Cobra DVD commentary

The Case For: One of the most delightfully incomprehensible action flicks of the 80s.

The Case Against: There isn't one. You need to see this movie.

Sylvester Stallone and director George P. Cosmatos were united on a film project for the second and final time by Menahm Golan and Yoram Globus’ Cannon Group. Getting Rambo’s creative team back together is an exciting proposition; when they’re in the hands of the producers behind Death Wish 3 and the American Ninja series, you know you’re going to see something wonderful.

Let me explain something about George P. Cosmatos. Technically, he was more competent than almost any action director working currently. It was obvious that he knew what to do with a camera, it's just that those talents had to crawl through the twisting maze of horrible, confusing ideas in his head before they reached the screen. He had no problem dealing with spatial continuity during complicated action scenes, or setting up decent-looking shots. He also had no problem producing something as baffling as the incredible robots/homeless people montage (see below.)

Listening to a Cosmatos DVD commentary is always far more entertaining than just watching the Cosmatos movie. On Cobra's track, he has almost nothing to add but ongoing narration describing what's happening on screen. He'll stop to marvel out loud at any shot where images are reflected in glass or water; that was a kind of obsession of his, and it's an ongoing trademark that appears throughout his work. Likewise, he'll mumble through any scene that's meant to be suspenseful about how "dark," "ominous," or "mysterious" it is, never failing to re-use one or all of those three words.
If you let Cosmatos into your heart, he will become your loveable old Film Uncle. He means well, he just gets a little confused sometimes. The world is a shittier place now that he is dead.

GONZALES: He looks like a fugitive from the 50s but he sure is great at catching Psychos. He’s a part of the Zombie Squad.
INGRID: What’s the Zombie Squad?
GONZALES: The bottom line.
COBRA: Maybe there’s more than one killer.
MONTE: Hey look, this is not your specialty, ok? This is pure investigative police work, not jumping through a window. 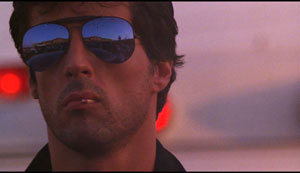 THE COBRA
REAL NAME - Marion Cobretti
SPECIALTY - Jumping through a window
POSITION - The Zombie Squad
ZOMBIE SQUAD - The bottom line. There’s a scene early on where Cobra has been called to infiltrate a supermarket where a shotgun-weilding Psycho is taking hostages. He’s a member (seemingly the sole member) of the LAPD’s “Zombie Squad,” an elite street execution force you call in when everyone wants to go home early. Cobra stalks through the aisles with his aviator sunglasses on. He holds his trademark matchstick in the corner of his mouth. He stops to crack open a warm Coors. He wears his sunglasses while he drinks the beer. (This was so cool, they put it in the trailer.)

He manages to ambush the guy, and they negotiate:

The central idea in Cobra is that there’s a new force behind violent crime in America. They call themselves Hunters. Cobra calls them Psychos. They fight for the Dream so that they can create the New World. They hold to one tenet: that they should be allowed to kill people randomly all the time for no reason. They are upset that the police stop them from doing this. 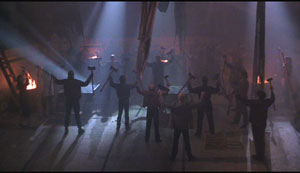 "All those bad guys with the axes, which create the mysterious feeling with their tattoos. We found an empty swimming pool, which I thought would be interesting, in an old abandoned building that was an old health club. And we thought that would be a great place like this…bad guys meet, makes it more ominous and mysterious and we hang cloths that are cloths hanging in the wind."
- George Pan Cosmatos, Cobra DVD commentary

Led by the Night Slasher, Psychos meet in a drained indoor pool to clang axes in unison. These are no ordinary street punks: there are well-dressed Business Psychos, Police Psychos, Construction Worker Psychos, Doctor Psychos(?), and others. What’s being demonstrated in these axe-clanging scenes is that Psychos come from all walks of life; varieties such as the Fireman Psycho, the Chef Psycho, and the Astronaut Psycho are not pictured, but it’s safe to assume that they exist.

Your next door neighbor could be a Psycho. Your closest friends and family members could be Psychos. Keep an eye out for anyone who is acting mysterious or very ominous. Psychos can only be identified by their fondness for axes and their iconic skull tattoos (which also feature axes.) If you suspect that someone you know could be a psycho, kill them. The courts will only put them back out on the streets.

INGRID: Can I ask you something?
COBRA: Sure, what’s that?
INGRID: Why were you fighting with the other police?
COBRA: Well, sometimes they don’t buy what I believe.
INGRID: There’s all these crazy people everywhere. Why can’t the police just put them away and keep them away?
COBRA: Tell it to the judge.
INGRID: What do you mean?
COBRA: We put ‘em away, they let ‘em out.
INGRID: (shaking head) Makes me sick.
COBRA: Well, like I said, you gotta tell it to the judge. 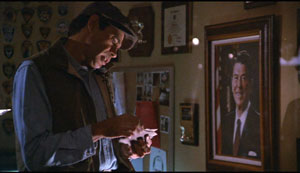 Just chillin' in Cobra's office. After killing the supermarket scumbag, Cobra goes back to his CobrApartment Cobra is carrying a newspaper. There is a grill outside his apartment.

Fill out the following comprehension worksheet as you watch Cobra:

When you’re done, mail your completed copy to:

Wait 2-3 weeks for a response, or check your work vs. the official answer key supplied by Cosmatos:

The Night Slasher and his band of Psychos keep driving through LA at night, ambushing people in their cars and murdering them for no reason (with axes.) Ingrid, played by the great Brigitte Nielsen, witnesses one of these slayings, accidentally setting the plot in motion. She’s seen the Night Slasher’s face, and that makes her a dire threat to the entire New World operation—even though the Night Slasher only seems to leave his creepy lair when it’s time to ambush people in their cars and murder them for no reason (with axes.) If this occurs to any of the Psychos who actually have day jobs, they’re good enough to not mention it and lend a hand in the all-out street war aimed at killing Ingrid (and also everyone else who sees the Night Slasher’s face while they’re murdering dozens of people to get to her.)