Wednesday, Oct 18, 2006 by Dan "Rivetz" Watson
Overview: A group of peppy French college kids struggle against an army of Nazi zombies as they race to recover a fortune in gold buried deep in the Sahara Desert.

The Case For: Hey, that actually sounds pretty cool. An energetic, low-budget romp through this might be kind of watchable.

The Case Against: It's not. At all.

I don’t consider myself a demanding guy when it comes to movies. In a perfect world, I’d like two things out of a film: 1) have it be about something interesting, and 2) tell a story about it in an interesting way. Great films typically accomplish both these goals; most films do a decent job of one and a poor job of the other. The really shitty films don’t even attempt to do either.

What, then, to make of Oasis of the Zombies? It’s about something interesting, all right: an oasis of zombies! Goal One ACCOMPLISHED! And yet through sheer force of will and an altogether innovative lack of anything remotely resembling style or flair, it torpedoes its slam-dunk “zombie oasis” concept with some of the most breathtakingly inept filmmaking I’ve been forced to weld my eyes to since Sinbad got his very own sitcom.

Not even One-Eyed Willy could save this piece of crap.

The action begins with a pair of chicks cruising around the Sahara Desert in a sassy red Jeep, presumably lost and disoriented since missing that tricky left turn to Fort Lauderdale. Describing these fine actresses is pointless since you can see them yourself with a little effort. Here’s what you do: write down the names of the three nastiest, most gonorrhea-infested strip clubs in your fine community. Pick one of them at random and swing by on a Tuesday evening around 1:30 am. Up there on the back stage, with the fake python? Holy shit, it’s the cast of Oasis of the Zombies! One of them looks like Kathy Bates channeling Shakira, and the other one clearly battled upper management to get a week off from her job behind the counter at AM/PM for this career-defining opportunity.

The dim-witted pair stop at a mysterious…oasis…to walk off a few dozen pounds (“We’ve been driving for fifteen hours!” one complains). Now, a word about the “oasis”. When I think of “oasis”, I think of a cluster of palm trees in the middle of the desert. When our esteemed director thinks of “oasis”, he apparently thinks of that kind of weedy area behind the Home Depot, y’know, kind of sandwiched between Best Buy and Home Depot near the interstate? Thanks to this film, I will never dare set foot in there, for fear that my definition of oasis is wrong, Jess Franco's is right, and the backlot of Best Buy is actually a zombie breeding ground awaiting only the incursion of a couple of brainless tits on legs to explode into bloody and painfully soporific slaughter.

After a couple long, lingering shots on key plot elements such as the ground and a spiderweb, the music kicks in, a woozy kind of hangover-esque synthesized doodling that sounds like someone strolled into Target with a pocket voice recorder and threw down a few choice bars on the $69.95 Casio keyboard behind the Gamecube aisle. WEEEEEE-OOOOOO-WEEEEEEE neeny neeny neeny neeny. Director Franco wisely chooses not to tip his hand here: we don’t see zombies, just grimy hands scrabbling at nasty fat-secretary ankles, and of course the timeless oh-god-I’m-screaming-and-running-because-there’s-a- pasty-cameraman-in-a-Hawaiian-shirt-chasing-me shot.

Oasis of the Zombies relies so heavily on stock footage that I suspect that somebody bought some aging 1970s 8mm footage of a tourist trip to the Middle East at a garage sale, dunked it in a vat of mead and piss for historical authenticity, and built a zombie oasis film around it. The credits are these moldy yellowed shots of Palestine or some shit; the credits, flashed on screen in ominously impassive Arial white, give the whole sequence a lean, Syriana-esque vibe, if Syriana eschewed the corruption in today’s petroleum industry to focus instead on architectural curiosities of southern Iran. By this time my finger was already spasming towards a fast-forward button; thank God I’d already thrown the remote across the room, otherwise I would have missed the cryptic credit: “Laboratory: Éclair”. 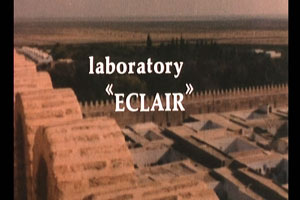 I’m also grateful to the editing crew for thoughtfully crediting the no-name cast with the no-name characters they play. At first I was confused seeing credits like “Roger Garcia:Robert Coleman”, but then I realized if I’m ever lucky enough to meet the real Robert Coleman in a dream or something, I’ll know who played him in Oasis of the Zombies! Or Roger Garcia. Or neither of them since it’s unlikely I’ll meet either Roger or Robert unless I move to upstate Arkansas or wherever the hell these talent-starved folks go to spend their $625 paychecks.

It’s clear that Franco cut his teeth on the seminal works of Kurosawa since right out of the gate we get ***flashbacks*** to the great desert campaign of World War Two. Any hopes I had of seeing stock footage of Erwin Rommel raping an AM/PM clerk behind Best Buy were swiftly dashed; instead we get an Allied massacre of Axis troops at the oasis back in 1943. The action is vivid and shocking. Soldiers flail their arms in bizarre tribute to disco as they’re shot, hurling themselves to the ground like epileptic breakdancers as they’re riddled with bullets, almost as if Sam Peckinpah was given a month to dick around with Garry’s Mod.

Adrenaline coursing through my veins, I was begging for a break in the action. Not to worry! If breaks in the action are your cup of tea, Oasis of the Zombies is the film for you. I had to actually double-check the DVD case to make sure that this wasn’t intended as an instructional video for Renaissance-era sculptors. We get long, langorous close-ups of people climbing stairs, people gazing quizzically at the sky, people scrutinizing potted plants, lengthy shots of the potted plants themselves, and my personal favorite, a ten-second cinematic inspection of a moldy abandoned hubcap half-hidden under some boards. 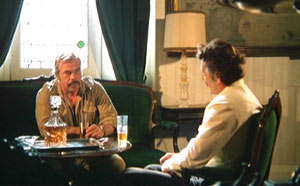 Enough jabberin’! I’ve got a story to tell here. Apparently when the soldiers moshed themselves to death in a hail of gunfire, they morphed into gummy sleepy zombies with missing eyes and teeth and what-not. The Axis troops were trucking a huge shipment of gold through the Sahara before they got Oasizombified™, so the main plot deals with different people trying to find the gold and finding zombies instead. Gold, zombies, deserts…there’s a movie in there someplace. I guess Franco thought so too, which is why he figured, Hell, why not turn these elements into a mind-numbing, grating slog through loving close-ups of drab adobe walls and the same goddamn desert dune filmed from eleven gratifyingly different angles?

There's some brief and stifling pseudo-drama involving Allied war buddies, one of whom knows where Best Buy is. The other one cajoles him into revealing its location and then injects him with some form of fancy poison, possibly distilled Oasis of the Zombies screenplay, that kills him in about .4 seconds flat. Then our pudgy mustached hero heads off to the oasis with his butch girlfriend and a couple jocks to find the gold, whereupon they're promptly eaten as well, mostly off-camera and accompanied by the same aimless keyboard doodling we've been subjected to since the opening, which at this point seems like about five hours ago. It was a younger time back then, a more innocent time. 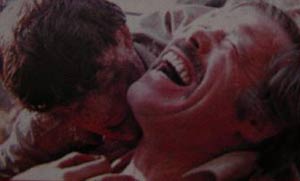 Eventually the crippled elephant I’ll call “the plot” gets us to our fearless heroes, a pussified curly-haired French college student, his simpering girlfriend, and his two douchebag frat buddies (or should I say, les freres du fraternite). Turns out this clown’s father was the guy commanding the Allied troops in the oasis fight, the same cat that got injected to death by his war pal. There’s a touching flashback that shows Dad escaping the massacre on foot and staggering around like a retard in the sand before he is rescued by some nomads. He’s so grateful to his rescuers that he impregnates the nomad king’s daughter. I may be getting the order of events turned around here. If you'd like me to rewatch this to concoct a more accurate timeline of events, please send payment in the amount of $600,000 to rivetz@somethingawful.com. I accept Paypal. Glancing at the DVD case peeking balefully out of the wastebasket to my right, why don't we make that $800K.

Anyway, when the Mighty Morphin Frenchin Losers get wind of the gold, they hop the first plane to Africa. Mercifully we are spared luxurious tracking shots of a taxiing airplane and the snaking line at the ticket counter. No, we are whisked right to the classic Arab bazaar, which looks suspiciously like the Sunday art market downtown, right down to the pot-smokers selling macramé birdhouses and stained-glass wind chimes; I’d like to acknowledge the technical efforts of whoever the filmmakers hired to edit out the hippies playing hackysack by the fountain.