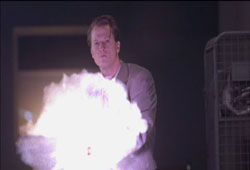 "Hey, mansquito! Look at this! Yeah, it's my failed acting career!"If we do know one thing about Lt. Randall, it is that he is an incredibly slow typist and possibly the stupidest man on earth. While this is not explicitly detailed in “Mosquitoman,” there is a lot of evidence. The movie begins with Randall opening a document on his computer and then his thought process as he begins to write.

We are then treated to the bulk of the story. A simple tale, “Mosquitoman” resorts to the classic pacing style of “have a half hour of setup and then another hour of the same thing happening over and over.” In short, First Look Entertainment literally ran out of things to do within forty-five minutes of the opening credits. Let’s recant the first half hour of the film:

Roy, a convicted killer facing a long sentence in Boring Actors Prison, is shipped to a pharmaceutical lab so some scientists in tight t-shirts can experiment on him. Mosquitoes around the country are carrying a terrible virus, and, as the lead scientist puts it, America needs an answer NOW. Like any crafty detective movie criminal, Roy manages to steal a cop’s gun and shoot some people before locking himself in a room with two scientists.

The scientists, of course, do not take kindly to this and let him know by screaming and pointing their breasts at the camera. This enrages Roy, and he responds to their terror by shooting one in the back for absolutely no reason. Unfortunately, this leaves him with only one scientist to hold hostage, and he does so until one of the idiot cops outside picks up the skill of “holding a keycard to an electronic lock.”

Roy isn’t the smartest criminal to grace a movie about a giant bug-monster. For some reason he lets the other scientist go and begins firing at the cops in front of him. Given that he needed no justification to cap the first girl, one would think he would at least use the second as a human shield. 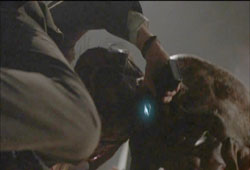 Against a bulletproof mosquito, there's only one option to save yourself: A dollar-store tazer.

Roy makes his second mistake when he decides to continue the shootout in front of a machine that sprays a glowing blue goo when shot. Seeing as the cops firing at him had never handled a handgun up to this point -- I’m pretty sure I saw one accidentally shoot himself because he was holding his pistol the wrong way -- this was probably Ray’s fatal flaw. After the machine behind him explodes, Ray finds himself coated in the goo but manages to escape. The scientist, too, is hit with the stuff in order to create a subplot that lends absolutely nothing to the movie’s story.

Shortly after the audience is treated to a morphing scene that looks like it came straight from Michael Jackson’s “Black or White” video. Born again as the MosquitoMan, Roy does what any good monster would do: He runs around the city and kills people in the exact same fashion for an hour.

Randall (played by Corin Nemec, who also starred in the Fox series “Parker Lewis Can’t Lose”) shows up shortly after to assess the damage and hit on the scientist. She ends up going home with him. Did they know each other before? Is there some story behind it all? Who fucking knows? This movie’s about a mosquito monster and First Look Entertainment be damned if they fag their movie up with any of that “character development” bullshit.

Aside from a minor plot point involving the scientist kind of sort of becoming a mosquito for a second, “MosquitoMan” accomplishes everything it needs to within forty-five minutes of play time. That doesn’t stop First Look Entertainment from making a full-on movie, though. Instead of following cinematic staples like “doing new things” and “possibly considering a rewrite,” the creative geniuses behind “MosquitoMan” just keep doing the same thing until the film hits an acceptable length. Here’s an accurate portrayal of the last hour of the movie, for your reading pleasure: 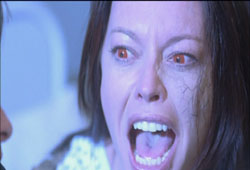 And that’s it. I think. I can’t be sure since I was too busy thinking of better ways I could have spent the money used to make this movie (example: throwing it in a furnace) after the first ten minutes.

But that’s not the point. After all the action happens (which is literally the same behind-the-back-of-the-victim shot about ten times over), we’re back in the office with Randall. He’s finishing his document, and by the look on his face he’s feeling fairly whimsical. He types the last few words with a content smile and hits the print button. A single piece of paper comes out of the printer and he picks it up.

For those of you who didn’t catch that: The movie is the memoirs of a man who took an hour and a half to write a one-page document. Our hero Randall can track down a cold-blooded killer but freezes up when it comes to writing a “what I did today” report.

I’m pretty sure Randall doesn’t know what to do with the document after that point, since he simply takes it, slaps it on a desk, and walks out the door of the nondescript office he’s in before the film cuts to credits. Since the people watching the movie have no idea where the hell he is or why he’s writing such an excruciating report, why should he?

We can only hope that, after all the trials and tribulations associated with fighting a mutant bug to the death, Randall found a better life somewhere out there in the city. Maybe he went on to develop a car-sized citronella candle or converted a corn silo into a gigantic can of RAID. When a character is painted in such broad strokes (i.e., he’s in the movie and sometimes shoots a gun), the sky’s the limit. As long as he didn’t go on to be in a sequel, I think we can all sleep easier tonight.