War of the Wools

They were here before us. They grew complacent in their dominion over this earth and almost without noticing the stewardship passed from their hands to ours. The ridiculous tentative clusters of our hovels seemed to become teeming cities overnight to a species that had existed unchanged for more than a million years. Though they were slow to react to our intrusion their wisdom spanned the eons. With the deliberateness of an alien intellect they drew their plans against us. Their superior minds enslaved a handful of us at a time and gradually they insinuated themselves into our culture. The sight of them, once strange, became commonplace until we barely noticed their presence. They even used television to convince us that they were beneficial and pleasant companions. Then, when their numbers in our midst had swollen to an unstoppable host, their assault began.

In two days they brought the greatest nation of the world to its knees. Man fled from his great cities in churning chaotic masses. It was a rout of human civilization, a massacre of mankind. 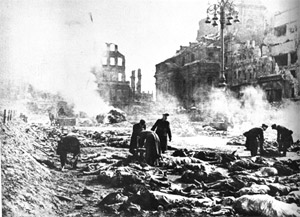 A jet of some sort, perhaps a fighter plane from the National Guard airbase, streaked across the horizon. It shed burning fragments as it went, like falling stars in the night sky. We paused only momentarily to watch it go, wondering in our own ways what cruel fate had befallen the men inside. No worse than surviving in a world of endless terrified flight from the unstoppable alien legions.

The artilleryman and I came upon an insolated farmhouse just as dawn began to reach burning fingers of red and gold into the sky. While I forced the crude lock of the cellar with a makeshift pry-bar the artilleryman crouched low behind the brush. From somewhere in the distance we heard their unearthly war cry, a howl of pleasure at their unequal hunting. They enjoyed an advantage over our armies that men with rifles and scopes might have had when pursuing a rabbit. The civilians caught in their path were a banquet or, when they were satiated, a grotesque amusement.

At last the door came open and we hid inside the cellar. The artilleryman found a way into the house and returned with a block of dried cheese from which we cut bitter slivers. We drank water from a rain cistern teeming with mosquito larvae and watched the flicker of fires slowly dim as the sun came into the sky. I slept fitfully, awakened from time to time by my fears alone, at others by the haunting war cries or the percussive sound of an explosion in the distance. Near dusk the artilleryman shook me awake, his eyes wide and red and a crazed smile upon his face.

"I've got it," he told me. "We're going to build a new world, underground where these things can't find us. Cellars and basements won't hide us forever, but the cities have millions of miles of drains."

I told him he was mad, but he wouldn't listen.

"Once they see us we're done in, but if they can't see us, if they can't find us, we can start again. We're going to start it all over underground. We'll build barracks, houses, schools, even shops and movie theaters, right beneath their feet. We'll study them and take them apart. Maybe we'll catch one and get it to tell us all their secrets. Then, when they least expect it, we'll surge up from the sewers and it'll be our turn to send them running! Their turn to do the dying!"

I shook my head. The artilleryman pressed a shovel into my hands.

"It starts with us, soldier. We dig down deep, where they can't find us. Look, I started while you slept."

The artilleryman showed me a tunnel he had been digging into the floor of the cellar. It was no deeper than my ankles. I could have dug that much in an hour, yet he seemed to think it was quite an accomplishment. I didn't have the heart to tell him otherwise.

He had found a bottle of champagne in his search for digging tools and in celebration of his plan we drank it and played checkers. With mankind on the brink of extinction, with no hope but a terrible death, we actually played a game. But, as they drew nearer and I could hear their ghastly cries with increasing regularity I felt a traitor to my own kind. The artilleryman, still mumbling to himself about his grand schemes, fell into a drunken sleep.

An insane resolve possessed me. I could see them moving in the distance and I resolved to not die like the artilleryman, cowering in a cellar with mad dreams of a better tomorrow. I took up my rifle and set out to give myself up to the first of them that I could find.

It took nearly a day of aimless wandering before I found them. In great numbers they choked interstate 90, forming a dense almost cottony shroud over the once-human landscape that jostled here and there as they moved. They seemed aimless, confused, and it took a great effort to forget their cruel intellects before I saw that they were behaving as they once had. Their masquerade would not fool me again.

I called out to them, casting aside my rifle as I raced down the embankment with my arms held wide. Those nearest to me raised their heads up from the ground in alarm and then began to press against the others fearfully. I did not stop, I ran to them headlong, praying that death would come quickly to me. I was footsore and weary, possessed with only enough mad energy for this last fatal dash.

I came up short as a few shied away from my sudden appearance. I fell to my knees before them, imploring these conquerors in words I scarcely recall to take me as they had taken all I knew and loved. They seemed confused by my presence, but gradually one dared to approach me. It nudged me gently with its white muzzle still stained with human blood and then chewed at my collar with big, flat teeth. A few cried out, their bleating strangely hollow, devoid of intelligence.

I screamed and wailed for them to take me and this only sent them into a terrified frenzy. They kicked and battered against once another until at last they found a direction and in a great galloping mass they left me utterly alone once again. With no more energy remaining to seek out my end I fell into a deep sleep on the broken pavement of the interstate.

When I awoke again it was to a few curious people prodding me with the barrel of my own rifle. They told me that it was over, that for whatever reason the creatures that had so nearly wiped us from the face of the planet had resumed their previous docile behavior. I joined a queue of survivors and listened to an announcement that proclaimed much the same thing. The voice of authority over the loudspeakers explained that as the creatures ate our flesh and drank our blood the diseases and bacteria that swarm and multiply within us infected them in ways they had not foreseen. They lost their intelligence as though in a fever-dream and reverted to the behavior they had constructed to fool us. The humblest of organism on this earth had saved us from them.

At the end of the queue I was given food and water and sent to stay at one of the homes in the area that still had electricity. I was the first to arrive and I almost instinctually turned on the television, hoping in some primal way to be comforted by its inanity. Most of the stations were dead or had an unpleasant emergency tone and a civil defense message repeating. A few that had been programmed to carry on without human supervision still continued to broadcast their regular shows. I watched a bit of something called "Silk Stalkings" and was somehow lulled. Then, to my horror, the first advertisement that played was that devised by these invaders to convince us to accept them into our society.

"I love alpacas." An older gentleman declared, laying a hand calmly over the very creature that probably sucked out his blood through a metal tube. 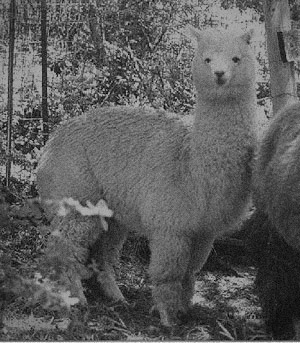 I wanted to laugh but instead I fell to the floor and retched.

"Go to Ilovealpacas dot com and-," I shouted and hurled the television out the window.

For now we are free to rest and gather our strength. I look to the abandoned suburban farms and wonder if some day these creatures might return with better plans and better weapons. The whole world waits fearfully for their return, to finish what they have begun.