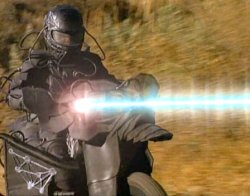 PYOO! PYOO! PYOO!Once the big door is open, Kirby, Wood, and Lee head down inside while the others are ordered to return to the cabin. As they wander the steam tunnels beneath the boonies, Wood and Lee have the best exchange in the entire film:

Understatement of the year. Anyways, after five minutes of wandering dark tunnels, the three finally come upon a dead end with a bunch of humming machines, one of which appears to be a microwave cooking another one of the alien meteors that created the murdercycle in the first place. "This is PETER," Wood explains. "Prototype Extraterrestrial Tachyon Energy Regulator." Turns out it's an alien probe that crash-landed in the area and has been feeding the American government super-advanced technological data for years, which explains why it's being kept in an obscure underground tunnel in the middle of nowhere with not a single person around to guard it. Before Kirby can raise this point, Lee senses someone coming and the three run off towards a convenient back exit. Along the way they run into Dr. Adams, who you almost certainly do not remember as the forensics expert introduced way back at the beginning of the movie, considering he has had pretty much nothing to do with the movie since then. Amazingly he found his way down into the tunnels, probably just as a fluke and not because he's actually an evil character after all. After escaping the tunnels, the team reforms and starts heading back to the cabin when the murdercycle strikes yet again. By this point the murdercycle is sick of playing around and just shoots another one of the marines dead before riding off. It's too bad that the murdercycle apparently has some sort of hunting permit that only allows one human prey every few hours, or else it would be able to finish this mess once and for all.

That night, the survivors are sitting around the cabin when Dr. Adams suddenly pulls a gun on Dr. Lee and drags her back to the underground lair where PETER is kept. I know, I could scarcely believe that he suddenly turned out to be some CIA bad guy, but after reviewing the massive amount of foreshadowing like "Dr. Adams looks at camera" and "Dr. Adams does absolutely nothing for first hour of movie," I can see where it came from. The others finally realize Adams and Lee are missing, but before they can think too hard about it, the murdercycle decides it's time to end this shit once and for all and literally drives through the door of the cabin. Luckily, Wood had already prepared for this eventuality, and the humans all dive out the windows just as Wood activates some enormous bomb he had planted earlier, thus destroying the cabin in a massive fireball and, presumably, the murdercycle along with it. 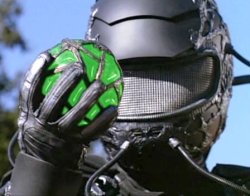 I HAVE RETRIEVED THE ORB. I CAN NOW RETURN TO MY HOME PLANET WITHOUT INCIDENT, UNLESS SOMEONE KILLS ME, IN WHICH CASE MY PEOPLE WILL SEND AN ARMADA TO EXTERMINATE THIS WORLD.Meanwhile, Dr. Adams forces Dr. Lee to shut down the containment system protecting the alien meteor, so he can do something evil with it. As she removes it she suddenly gets a vision of the future which includes running through a field and throwing the meteor at something, which also gives her the foresight to knee Adams in the crotch when he tries to take the meteor, and Dr. Lee takes off running through the tunnels with Adams in hot pursuit. Amazingly, the murdercycle has not only survived but it materializes in the tunnels as well, and it's a three way chase as Dr. Lee manages to get to the back exit where it is magically daylight again. Adams gets run over by the murdercycle in an utterly anticlimactic death, and Lee happens to run into Kirby and rest of the remaining gang as they stand around in the ghost town. Just then the murdercycle rides up and suddenly stops, and a deep computerized voice rumbles:

Murdercycle: DO NOT ATTACK. I WANT TO COMMUNICATE WITH YOU.
Kirby: What the hell are you?
Murdercycle: INTEGRATION OF THE HOST BRAIN REQUIRED SOME TIME. THIS HAS NOW BEEN ACCOMPLISHED AND I WANT TO COMMUNICATE WITH YOU. WHY DO YOU ATTACK?
Kirby: You invaded us! Killed my men and killed my squad!
Murdercycle: YOU HAVE STOLEN A DEVICE FROM US. YOU HAVE USED IT TO ACQUIRE FORBIDDEN INFORMATION. I HAVE BEEN SENT TO RETRIEVE THIS DEVICE. I DO WHAT IS NECESSARY TO ACCOMPLISH MY MISSION. I AM A SOLDIER.

Well, when you put it that way, it actually does sound kind of reasonable. I think maybe they should just-

Kirby: So am I!
Murdercycle: DO YOU COMPREHEND THAT ARMED CONFLICT BETWEEN US CONSTITUTES WAR BETWEEN OUR PLANETS?!

What? War of the Worlds shit? Just give him back his fucking alien orb thing, what the hell do you want it for?

Kirby: I understand, but I got my orders.
Murdercycle: SINGLE COMBAT WITH YOU WOULD SERVE NO PURPOSE. YOUR WEAPONS CANNOT DESTROY ME. I CANNOT BE OTHER THAN WHAT I AM. I WILL DESTROY YOU.
Kirby: Good luck!
Murdercycle: THEN YOU MUST DIE!

Just then, Dr. Lee pops out waving the device, causing the murdercycle to turn around and go for her, instead. Following her vision from earlier, she throws the meteor at the murdercycle, and Kirby blows it up with a single bullet, thus destroying the murdercycle and dooming our planet to being invaded and conquered by a superior alien race. Thanks a lot, assholes.