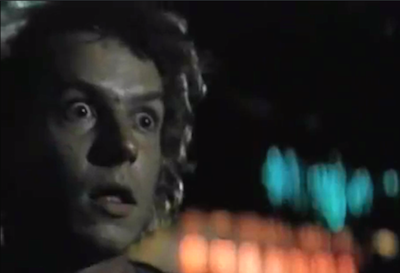 We just can't get over how goddamn stupid that premise is. These dudes didn't even try inept hitmen or exploding birthday cakes or ridiculously elaborate dognappings, or even a good old-fashioned speedboat death chase or two first - nope, straight to the kung-fu vampires[2]. But hey, in their defense, these are vampires we're talking about; must be pretty hard to beat that, right? The immortality, the super strength/speed, the serious commitment to slaughtering humans like livestock and guzzling their blood - you know, all those classic vampire qualities that the useless piece of shit Robovampires have absolutely none of whatsoever. Oh, and not only do they not have any badass superpowers, they routinely get their shit rocked by things that wouldn't faze most 9-year-old hemophiliacs with anxiety disorders. Example: their ultimate weakness? Paper. Seriously - sticking a glorified post-it note to their foreheads shuts them down like a fucking auto plant in Detroit.

Don't get your hopes up for the Robo part of the title either, he isn't any better. Spoiler alert: he sucks, dies, sucks even worse as a robot, and somehow dies again. He's like the Six Dollar Man. "Gentlemen, we can rebuild him...again...we still have some parts left over from last time. We can make him stronger, faster, less dead, more copyright infringing...." Robo's main features are a giant gun he can't aim, a crappy voice modulator that fades in and out, and taking 5 minutes solid to turn around. With tactical advantages like those, he's ready to face a horde of gibbering retarded vampires:

Score one for robo-justice! Unfortunately, the movie doesn't end there, since the criminal syndicate managed to find one vampire who isn't totally worthless. He's also a gorilla who is in love with a ghost, which we're not even going to try to explain because our ears start bleeding whenever we think about it too hard. Suffice it to say that King Kong Pao Dracula is more than an even match for Robo Narc. In fact, they're so evenly matched that they spend the rest of the film in an eternal struggle, and no matter how many times they punch, kick, or shoot each other, it never seems to have any effect:

In summary, Robo Vampire is the worst cinematic depiction you'll ever find of RobotCops, CopperBots, vampires, or the world of drug trafficking in general. Especially that last one. Again, not professional drug smugglers or anything, but we're pretty sure cramming donkey carcasses full of heroin and shipping them off to customs isn't the most foolproof drug running strategy. We suspect someone probably took the term "drug mule" a little too literally somewhere along the line and the rest is history. Then again, when your drug cartel is run by people who think "hmm, yes, this arranged ghost-vampire gorilla marriage will really help out our heroin smuggling numbers", maybe anything you can try is an improvement. But hey, it's not a total loss - at least when our ears stopped ringing from a lethal combination of music and dialogue, it gave us the greatest pickup line in history: "You should bathe more often". Come and get it, weird diaphanous ghost ladies.

[2] We use the term "kung fu" loosely here, since the vampires don't really seem to be very good at martial arts or really much of anything besides getting their asses kicked over and over and hopping around like schizophrenic wallaby otherkin.