Highlights From the Premiere of Syfy's Dominion

"A soldier finds out he has been selected as the 'chosen one,' who has to lead humanity and end the shocking war with the angels for good."

What drew me to Syfy's new original series Dominion? The fascinating concept of a "chosen one" - a character who is destined to be awesome and kill all the bad guys. It's one hell of a hook. I play a lot of video games, and it occurs to me that they could learn a thing or two about narrative here. 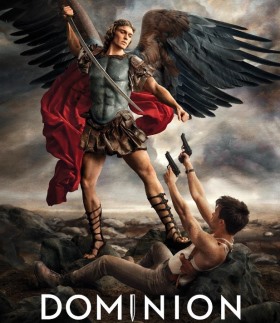 Note: The characters depicted above look nothing like the actors in the show.The show kicks off with the most needlessly dense introduction ever made. An endless procession of artwork slides and text blurbs convey the following: God disappeared 25 years ago. Angels blamed man for God's disappearance. The angels waged war on humanity. Archangels can walk around on Earth because they're super awesome. Normal angels aren't powerful enough to show up in the mortal realm. They need physical bodies so they possess humans. Now there are secret angels walking among humans. The archangel Michael decided to side with humanity. He helped us establish a fortress city where people can be relatively safe. Years ago Michael saved a baby with special markings. It was a VIB (very important baby) and now it has grown up to be the chosen one.

Got all that? Good.

There's a soldier in a run-down building. Let's call him Chosen One because come on. Chosen One is inspecting a heavy duty rifle. There's a spooky sound nearby, so naturally he puts the rifle away and investigates with a handgun.

He comes across three people gathered around a poker table. After a few pointless moments where no one plays poker or does much of anything the people turn and we see that they are actually scary angels! Chosen One shoots an angel (possibly Courtney Love) in the head. Now there are two angels.

Chosen One runs to his truck and speeds towards a fortified section of ruined Las Vegas with one of the angels giving chase. He radios for the gate to open. We see a man inside the city contemplating the opening of the gate, but he doesn't say anything. What can I say, the dude loves tension.

An automated turrets blast the angel. If you've been following along, you'll know that there is one angel left.

Chosen One is finally allowed in. He tells the guards that they need to scramble because there's a whole group of angels back in that run-down building. The one where there is only one angel.

Elsewhere, the archangel Michael broods as a pile of oiled up women sleep behind him in elaborate poses. Michael is looking out over Vega, which is like Las Vegas but (I'm assuming) strictly for fans of Tom's Diner and Luka. The good looking archangel expresses guilt about having so much hot sex all over the place, then he jumps out of the window. Just before he hits the ground he opens his angel wings and flies. Why wait until the last moment? What can I say, the dude loves tension.

Chosen One is being driven through Vega back to his barracks. On the city's streets we see about five tables of rather nice fruit for sale and thirty vaguely grubby people wandering around. A guy in a funny helmet casually scampers away from a few jogging cops. The driver shakes his head and remarks, "This city's going to hell." Some viewers might get so caught up in this haunting sequence that they think they're watching Apocalypse Now.

In the barracks, Chosen One is visited by Central Casting Orphan: 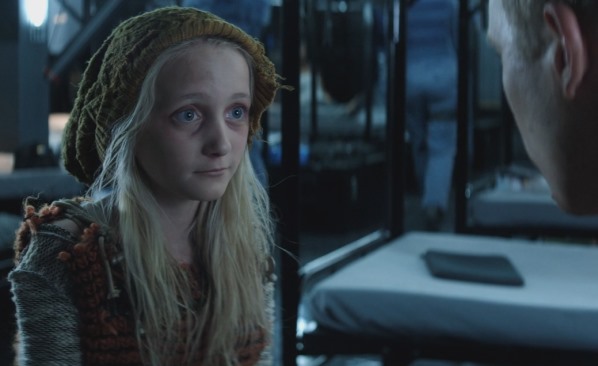 "Please, sir, I want some more blood vessels under me eyes."

Central Casting Orphan is not particularly dirty so much as she is a very small human with her knob tuned directly between Pathetic and Trusting. I have no idea why she's allowed in a room full of soldiers. She exists to greedily eat a few of Chosen One's leftover peanuts so we know he's a good guy. Later, she returns to find Chosen One sharpening a blade and asks who he's going to stab. He replies, "You." At this point I assume they share a Han Solo and Chewbacca relationship, joking around with casual threats. Neither character laughs. Moments later Chosen One apologizes for losing his temper. So I guess he really did threaten to stab the little girl. Duly noted.

Soon there's a coed shower in the barracks. There's some talk about tiger diets, but all I can focus on is the butts. Man butts. Woman butts. This is butt central and the camera cannot look away.

A delegation of off-brand Muslim women arrives and gives a present to Evil Man In Suit (he's an evil man in a suit). The present is a gun. He points it in the face of the main delegate for no reason at all. Then Man In Suit puts the gun away nonchalantly and everyone continues as if this isn't the weirdest fucking thing.

Evil Man In Suit decides that they're doing too good of a job protecting Vega. Everyone is complacent, and this really gets his goat. Evil Man In Suit smuggles an angel into the city to fight in their arena. Surprisingly, this goes horribly wrong. The angel breaks out. Panic ensues, causing a stampede which almost gives the impression of plot movement. Three superangels crash into the city's nuclear facility. It's enough to temporarily cut off the power, but not enough to destroy it or cause a meltdown. They leave because... I guess that was good enough for them.

Chosen One's dying father tells him that he is the chosen one. Everyone knows this is true because the dad's tattoos disappear when he dies and they reappear on Chosen One.

I sit down and write a few words in the hopes of parsing what I just watched. Nothing good comes of it. I pass the burden on to you.