Overview: A crazy old German scientist somehow turns the bird flu into a zombie epidemic, resulting in murderous CGI crows, rockabilly power-metal zombie Hun greasers, and lots of boring dialogue between characters that just need to hurry up and die already so you can stop listening to their bullshit.

The Case For: One particularly industrious zombie gives himself an impromptu DIY viking funeral, self-immolating boat ride and all, which is one of the greatest things you could ever hope to see in any movie. Especially one this dumb.

The Case Against: The occasional attempts at humor (like the confused zombie who gets a cell-phone call from his wife) only serve to remind us that the rest of this movie is played straight, which is a shame because if you're not going to go balls-to-the-wall insane, why make a zombie movie in the first place? 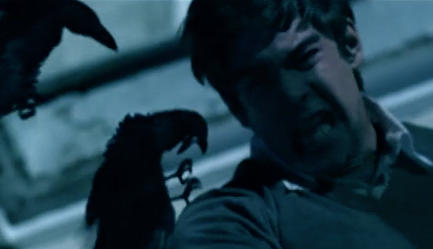 We can't really come up with anything like a coherent summary of Beast Within, but it's not our fault, we promise. Even if you cornered director Wolf Wolff (actual name, not even joking) and tried to force a plot summary of Beast Within out of him[1], we think he'd be harder pressed than a stooge's skull in a combo vise to give you one. This is one of those movies that just doesn't really know what the hell it's supposed to be; Beast Within sounds like some kind of werewolf-type situation, but that's not even close. The alternate title, Virus Undead, is a better clue to the fat German rockabilly zombie post-apocalypse that this movie really is.

Yes, like the fabled and glorious Zombie '90, Beast Within once more showcases the beloved German national pastimes of eating human flesh and making absolutely no kind of sense to the rest of the world - all with a nice (if slight) little bonus dash of The Birds stirred in. Come to think of it, based on the opening sequence we were really expecting a high-octane, 21st-century German remake of The Birds:

That's followed immediately by some mutant CGI birds eating Herr Doktor-Professor Macguffinstein in his spooOOoOo0ky Science Mansion, and this is all before the opening credits even finish rolling. Sadly, as soon as the credits finish, a completely unrelated and much more boring movie starts up instead. Our best guess is that they blew the entire SFX budget on those two scenes, realized "ach scheisse, ve're out of das money", and then proceeded to do a complete U-Boat-turn and make yet another crappy low-budget zombie survival movie instead (the money for a screenwriter also, presumably, having disintegrated like a muscle car flying off of a hydraulic catapult.)

For a little while, it does feel like Beast Within is at least trying to have some sort of backstory to it. Our protagonist is the grandson of the delightfully ephemeral Professor von Crow Snack, and when he inherits his pop-pop's creepy mad science slash party mansion slash taxidermy warehouse, he naturally brings along his best med-school buddies to investigate: a group of rich and nuanced characters who we've taken to calling by their defining characteristics: Buttpipe, Psycho Fuck, Whorelga, and Other Girl. There's lots of bluster about some masked guys burglarizing the house first, and our heroes going through the grandfather's research papers and doing XXXtreme science in his secret basement lab, but ultimately none of it amounts to anything and we just end up watching all of the characters hang out and get wine-drunk for like an hour until the zombie menace finally gets up off its ass and shows up to the party.

We may not have properly stressed so far that this isn't just any zombie movie, it's a German zombie movie. Sure, everyone speaks English, but there are plenty of not-so-subtle clues as to Beast Within's true pedigree, like sausage delivery mopeds, moody adults with strange accents guzzling absinthe and threatening to kill themselves 12 times an hour, and of course the most German scene of all, in which two of the characters enjoy some sex and light bondage in the haunted taxidermy and dusty bedsheets room. Oh, and the cuckoo clock which gets covered in a gratuitous spraypaint of brain matter and fake blood[2].

Like we said we're not going to bother with a plot summary, but you should be able to reconstruct everyone's character arc in your head just based on the names: Buttpipe is a total buttpipe to Psycho Fuck, which causes Whorelga's panties to immediately drop for him faster than a Jewish last name at a Wagner concert, and also of course begins Psycho Fuck's descent into self-destructive madness (but he redeems himself at the last minute in a blaze of glorious zombie death.) Meanwhile, Other Girl sort of tags along in the background and provides tepid romantic interest for Protagonist. Everyone dies but Protagonist, because nihilism was invented in Germany and they'll be damned if a romance subplot gets to live through a zombie apocalypse on their watch. The less said about the actual zombie parts of the movie, the better, although we will point out that all of the characters definitely earned their deaths by wasting shitloads of ammo at the beginning of the festivities.

Aside from a brief moment of ending confusion where it's in serious danger of becoming Birdemic, Beast Within is a more or less passable zombie movie, with the requisite nauseating sound effects and buckets of gore. Somehow, when it all comes together this movie just doesn't seem that bad to us, probably because Zombie '90 already took the bar for German zombie movies and buried it 30 feet underground (although we'll always remember it fondly for our favorite awful movie prop of all time, the surgical science luger.) Or maybe we were won over by the guy who treated himself to his own personal Viking funeral:

[1] Most people would probably go instead for the more obvious question: "Wolf Wolff? Is that seriously your name? Like, your real name? Did your parents hate you, or what?"

[2] For the record, we think Brain Matter Cuckoo Clock would be a great name for a death metal Kraftwerk cover band.