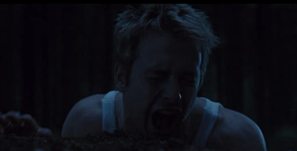 Awww ohh yeahhh baby why don't you chew my cock off so the audience can see a big bloody swawsh on my shorts and then I can writhe around on the ground for five minutes whimpering in agony mmmmmmmmmmn yeah people are gonna pay so much money to watch that The first half of the movie is pretty much limited to quasi-eerie happenings and random intrigue between the three sets of monogamous couples. Amazingly, the dialogue is kind of good, and makes it mildly entertaining to watch plot highlights such as everyone hating each other abruptly, a discussion about how long stoner's glass-blown tobacco pipe is, and some good old fashioned sexual intercourse. This act of going deedly dee is brought to a close when Bluto goes out into the woods and gets a fatal ghost blowjob.

Or -and I suggest that you plug your rectum shut with the nearest small animal lest you shit your pants in shock- does he? Virgin's mushroom binge is making her see shit all out of order, and everyone's having hallucinations of Spooky Bad Hooded Person(s) making unfriendly faces. I'll give Shrooms another thing that sets it apart from Sci-Fi Channel Original Movies: the drug trip scenes are actually kind of cool. Yes, the villain looks like he got his look from a pharmacy bargain bin in November, but at least he pops up in fun places in the frame. The gimmick is that supernatural visions are occuring among some very tragic murders; we don't know what's reality and what's clever CGI! Plus, Virgin's seeing shit all out of order, so just because we see a character take an axe to the head doesn't mean we don't have to put up with them whining for another half hour!

Ugh look at those creeps I bet they eat possum or vote Republican GROSS.Sadly, it still isn't hard to know what's going on. Despite its good points, Shrooms is also not shy about - to use a professional cinematic term- ripping people way the fuck off. I almost never watch horror movies because I am the kind of whimpy little pussy who won't play Silent Hill with the lights off, and I managed to count no less than "borrowed" scenes. Well okay they weren't all from horror movies.

Speaking of flies, the characters need to drop like them much, much faster. It's more than halfway through the

movie when the first character dies, and the action is still mostly devoted to people scurrying through the woods and kind-of-sort-of fleeing from Hoodie, bumpkin retards, and some kid with a sack on his head. The originally interesting gimmick of WE DON'T KNOW WHAT'S REAL AND WHAT'S NOT get old when you guess what the incredibly obvious "twist" ending is, especially when Virgin's fucked-up chronology means you're watching the same shit over and over again, only to find out the last twenty minutes of footage were just a dream.

Shrooms starts out amusing, quickly becomes boring, and spends its bulk being so tedious you want to take your life with a pair of scissors. It's a god-awful horror movie, but actually would do okay as a comedy. Say what you want, but it takes talent to make a bunch of white people stereotypes poking at their genitals entertaining.