Steven Spielberg reignites our childhoods with The Adventures of Tintin: The Secret of the Unicorn, Andrew Niccol explores class warfare with In Time, Bruce Robinson evokes Hunter S. Thompson for The Rum Diary, Roland Emmerich tries to make Shakespeare look bad in Anonymous and then there's some talking cats or something. Not the spookiest of Halloween weekends, I admit.

The Adventures of Tintin: The Secret of the Unicorn

REALITY: Incredibly, The Adventures of Tintin takes the latest advancements in filmmaking technology and uses them to make something joyously old-fashioned. Spielberg's take on the deeds of the round-headed, pointy-haired youngster harken back to the very notion of adventure stories that held us rapt as children.

During a visit to the town market, intrepid journalist Tintin (Jamie Bell) cannot resist buying a model ship for a pound just before the suspicious Ivanovich Sakharine (Daniel Craig) gets there with the intention of doing the same. Intent on finding out why Sakharine wanted the model so much, Tintin does some investigation and finds that Sakharine has captured Scottish sea captain Archibald Haddock (Andy Serkis) in the hopes of finding his family fortune, the clues to which are hidden within three model ships. 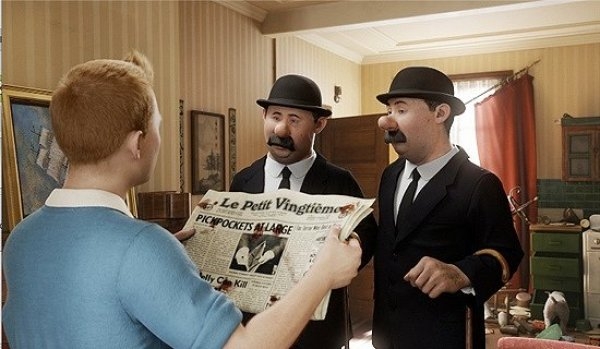 Thomson (Simon Pegg) and Thomson (Nick Frost). Don't ask me which is which.

You see how quickly I laid out the plot there? Well, this film somehow manages to do it in half the time. The pace is so fast that we never really get a chance to sit back and think about what's going on before we roll into the next setpiece. While this certainly helps sell the idea of this being part of an old movie serial, picking up from Tintin's previous adventures, it does leave a bit of a gap where there should be characterisation. By the end of the film, we really know very little about Tintin beyond the fact that he has adventures on a regular basis. He reminds me of Robin as played by Burt Ward in the old Batman TV show: unquestionably moralistic yet somehow completely incorruptible in his youthful innocence. The only difference here being that it isn't presented as a joke and he isn't second fiddle to an overacting lug: He's the main hero and his sidekicks are a super-intelligent dog and a hugely charismatic drunken Scot whose alcoholic burps can fuel an aeroplane (literally). While I certainly left wanting to see more of his adventures, I don't think I can attribute that to the Tintin character, but more to the unique style of the film itself. 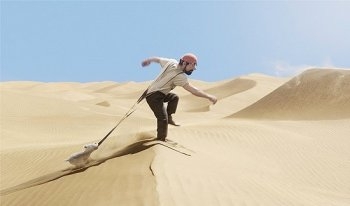 Dogs hate Scottish people, that's a well-known fact.Spielberg clearly loves what the motion-capture technology can do. The thing that always sticks in my mind about his incredible Indiana Jones chase scenes is that they were relentless but felt like they were made up as they went along. Tintin's chases have the same feel about them, except they are generally composed in a single shot with a huge, sweeping camera movement. He made up the chase blow-by-blow and then built a location that it could move through seamlessly with reverse logic. Your actors can perform through the entire sequence and yet impossible stunts are made simple through the use of animation. This is the kind of thing new technology allows for, but we haven't seen it used to its fullest effect. Trust Spielberg, an old-guard Hollywood blockbuster filmmaker, to show the new generation how to be modern.

There are also some very nice transitions between scenes that use a similar logic of fluid motion; a rough ocean becomes a rippling puddle on a London street, for example. This hits its peak when Haddock recounts the tale of his late grandfather fighting off the pirate crew of Red Rackham, drifting between flashback and theatrical play-acting in the present scene. It's a fantastic use of mise en scène, and it's doubtlessly Tintin's most memorable sequence.

To understand The Adventures of Tintin is to understand the importance of adventure stories themselves. We will always need them to brighten up the lives of our inner children, and just as this film starts in the implied aftermath of other adventures and ends on the promise of more to come, we will always seek out films, novels, comic books and even video games to keep the flame of adventure burning in our lives. Tintin is just here to remind us of that.

MINORITY REPORT: I really hope I'm wrong, but somehow I can't imagine a CGI movie based on a bunch of old Belgian comic books is going to fly in the country that spawned Jersey Shore, "Party Rock Anthem" and the Goddamn Big Bang Theory. - Joseph "Jay Dub" Wade