Overview: Poultry farm caretakers and their associates engage in romantic trysts, concoct murderous plots, and conduct bizarre experiments, all in the most pretentious manner possible.
Directed By: Giulio Questi, 1968
The Case For: This movie contains a cage filled with mutated poultry.
The Case Against: The headless, wingless freak chickens fail to take gory revenge on the heartless world that made them during their two minutes of screen time. 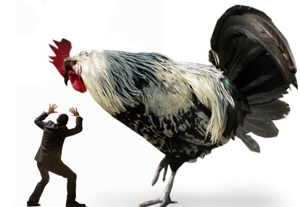 Not pictured in the movie: This scene.I ordered Death Laid An Egg without doing much research, assuming it would be a preposterous movie about a radioactive monster chicken. My hopes sank during the film's first five minutes, which contain: a) An old man gloomily pulling a plastic bag over his head b) Some grimacing mole-face squeezing a tube of toothpaste into the sink c) Quick, pointless cuts to traffic d) A hotel room shot that starts at one side of the room, passes a pacing man, then slowly returns in the opposite direction. This painful "Everybody Hurts" montage clearly established this as an Art Film, something that usually exists outside the realm of Something Awful mockery, mostly because none of us wants to sit through this shit. But I decided to proceed, because Death Laid An Egg, for all its gimmicky camera work and Important Statements about Modern Society, deserved a chance to prove it was just as inane as any horror, sci-fi or martial-arts movie.

Everything means Something in an Art Film. The toothpaste wastrel symbolizes empty consumerism, and old bag head illustrates how infants, who are also bald, occasionally suffocate in plastic packaging. Having served their allegorical purpose, none of these people were seen again. This opening sequence does introduce a major character, who stabs a woman in a hotel room. Well, actually he's shown slicing the air with his knife, while she screams in incongruity with his movements, and blood splatters in places it shouldn't. Art Films revel in squeezing the fun out of situations that should provide visceral thrills. Later, there's a sex scene that consists largely of close ups so extreme that viewers can't identify what body parts the camera is magnifying.

The Stabber lives next to a poultry farm, but instead of actively participating in the slaughter, he delegates the maiming to The Machine, a new device that dispenses feed, activates threshing blades and plays acoustic Brazilian Tropicalismo. This isn't a commentary on the film's actual score, a cacophony that sounds like people staging a swordfight with synthesizers and strings. The Machine comes with loudspeakers, and the music inspires the cluckers to perk up and straighten their doomed necks. At one point, the singer releases an anguished, disgusted sigh as if he'd just seen something horrible, like graphic footage of poultry preparation, or this movie's opening sequence. A slovenly bunch of fired workers sneer from behind a chain-link fence across the street. Either they used to butcher the chickens by hand, or they once served as the live folk band. 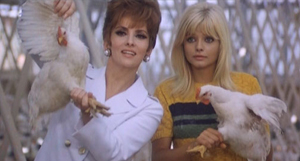 Chicken, wife, Gabrielle, chicken.The Stabber lives with his wife and also his blonde mistress Gabrielle. In an entertaining movie, the wife would resolve this tension inherent in this living arrangement by pushing the offending pair into The Machine and feeding their shredded innards to the livestock, which would then become monstrous and vengeful. The wife wants to dismember Gabrielle, but because this is an Art Film, she expresses this desire passive-aggressively, in the form of a tedious analogy about dissembling a human doll. When Stabber interjects "that's pretty abstract," she responds "there's nothing abstract about Gabrielle when you see her in the nude." Sadly, by the time the movie ends, that line won't even crack the list of its twenty stupidest quotes.

Stabber holds an ambiguous job with The Association, a mysterious group that aims to increase chicken visibility. "The difficulty we face is that nobody knows poultry," assesses the organization's frazzled elderly leader. To fix this problem, The Association hires a publicist, who devises a campaign starring the chicken as "principal actor in the drama of modern life," and appoints the Slasher to serve as his involuntary adviser.

The Machine's secret purpose is creating wingless, headless and largely boneless chickens. Stabber doesn't like the looks of these living, breathing meat lumps, so he crushes them with a blunt object, producing a comic splat sound effect. The Association's leader won't stand for such sabotage, telling him "your behavior seems to be outside the realm of any human standard." The Association scenes are like this movie's golden eggs, which are carelessly melted down and poured into a vat filled with the raw yolk of a pseudo-erotic thriller.

After a random accident flashback, Stabber escapes the pressures of his no-duty position by prancing through a corn field with Gabrielle, who pantomimes being shot and starts eating flowers. If this were a romantic comedy, she'd be employing such antics to teach him how to embrace life again. Because it's an Art Film, she's just doing weird shit for weird shit's sake, between philosophical musings such as "love is a luxury."

Stabber finally gets back to his real calling -- butchering hookers in hotel rooms. In the final act, police officers storm the poultry shed. A cop cracks open an egg and drinks the yellow goo, right as the folk singer reprises the dismayed sigh. The word "Fine" appears on the screen. This could've been the perfect ending, if only this were a parody of Art Films instead of a horrendous example of the form.