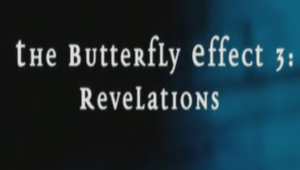 Overview: The Butterfly Effect saga began in 2004 with a "thriller" movie that the critics used for target practice, probably because it expected them to perceive Ashton Kutcher as a more compelling character than a stoner with pubeface. But now that Michigan's desperate economy permits entire mini-series to be produced there for the cost of an Extra Value Meal, why let the cinematic magic end???

The Case For: Just knowing that there is someone in Hollywood coked out enough to want a Butterfly Effect 3 made me smile. Also there are bear traps.

The Case Against: The fact the industry assumed it would be profitable to produce a Butterfly Effect 3 does not bode well for the future of humanity. Bonus Creepy Points for making a sisterfucking plot twist somehow predictable. 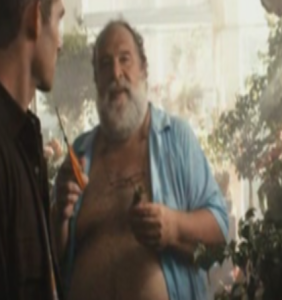 "Hey sup I'm the moral authority in this movie."For the lucky few who live in idiot-proof bunkers, each Butterfly Effect film deals with a magical time-traveling white boy who is desperate to dick with the past in order to get his way, usually in the form of pussy. The franchise's gimmick is that every time these indigo children mess with shit in the past, it completely and seemingly randomly alters the scenario in the present. This is a phenomenon that could theoretically occur in time travel (BORED NERDS: click here! ) but is wisely ignored by everyone but comic-con attendees.

Why? Because unless your screenwriter is, you know, actually talented, it only serves to make storytelling that much more complicated, requiring excruciating exposition sequences after every relentless flashback. Luckily for bloated producers everywhere, it's a fucking great way to burn up 90 minutes' worth of film stock without having to perform the pesky task of coming up with interesting or meaningful material. Consumers are apparently too ADHD these days to notice that a terrible movie in CRAZY CHRONOLOGICAL ORDER is still really, really bad.

I was hoping Butterfly Effect 3 would be a case of so-bad-it's-good, but turned out to be as entertaining and thrilling as zipping off to an alternate dimension to watch paint dry. We're introduced to an obnoxious frat boy named Sam 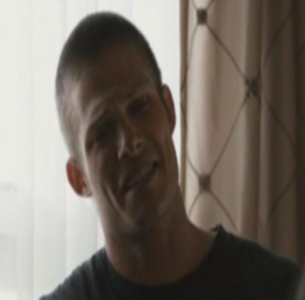 Is this the face of a murderer???who can travel in time via a magical bathtub, which is never remotely explained but treats us to multiple viewings of the actor's nipple fuzz. We learn there is a murderer on the loose who chops up the film's numerous sexy ladies, and that Sammy has been going back in time in an attempt to "fix" this. But the more he travels back in time, the worse the murders seem to get! The big spooky retarded elephant in the room is: IS SAM MURDERING PEOPLE?!!?!

"Of course not!" the script practically shrieks into every one of the viewer's orifices, "we think Sam is a super cool dude, despite his numerous tirades of screaming and whining and passive aggression!" I think he could've done it, I guess. Maybe. So many people die in ketchup-smeared gorefests that I'm not entirely sure which murders he's being accused of at any given point, which doesn't matter because every five seconds someone different is alive again! Even if he's not the murderer, the deaths are his own damned fault anyway for being one of the most idiotically selfish protagonists I've ever seen. Here is an actual exchange of dialogue, roughly paraphrased:

Wise Bearded Fat Man: Hey brah don't go changing things in the past because it makes bad things happen a bunch of which you have already caused at this point!

Sam: (squinting with hemorrhoid-inducing intensity) But what if I... GO BACK INTO THE PAST??? That will make stuff better, right???

Stuff, astoundingly, does not improve.