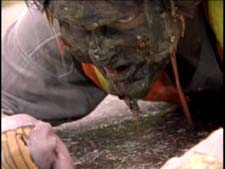 Sorry, zombie, but you'll always be known as the zombie who died alone, in the afternoon, in the middle of the road, and dripping more fluids than any man should drip.

Elsewhere, an old bearded man called the General drives along until he eagerly gets the chance to run over a zombie construction worker. You know, if this was "28 Days Later," the General would have to stop to change his tire as the zombie construction worker closed in on him, twitching and vomiting blood all the while. Sadly, this is "Vampires vs. Zombies," so the General just shouts out "Alright you zombie fuck! Rot in hell Ho ho!" with basically the same tonality one might use to call an audience member down to the front of the studio to play "The Price Is Right." And before you ask, no, the General is not a zombie. Like I said, there is no vampire-on-zombie violence at any point in this movie. If you're reading this just out of the hopes that Carmilla might wail on a bunch of zombies at some point, just click on something else right now and save yourself the heartache. The best I can promise you is that at some point in the next few paragraphs, two decently attractive women are going to kiss. For the record, this zombie survives, as evidenced by several completely unnecessary closeups of him crawling along the road, squirting what looks to be several flavors of Juicy Juice out of the sides of his head.

The General stops at a gas station to get his windshield fixed. Amazingly, Julia shows up with her hostage at the same time! Imagine that! When the General sees them, he becomes convinced that the hostage is Carmilla, who is apparently responsible for something bad happening to his daughter. He nudges Julia out of the way with just about the single weakest push I've ever seen on camera, then drags the hostage girl into his own car. It looks like the General got the best of Julia - but wait! Julia wanted the General to take the hostage! That's apparently why she had the hostage with her the whole time! You see, as long as the General, who is some sort of vampire hunter, I guess, thinks he has Carmilla, he doesn't have the real Carmilla, which means the real Carmilla is free to... ride in the back of a Jeep. Or something. It makes a lot more sense when you watch it. Oh wait, no, no it doesn't. Actually, it makes a lot less sense when you watch it. I'm simplifying things for the sake of this review. There are a few things that seem odd about this scene, though. For instance, Julia removes the hostage's gag and bonds to create a better illusion, but the girl never tries to escape or explain that she's not actually Carmilla. You'd think that might come up in conversation, especially when an elderly redneck is stuffing you in his car so he can kill you at his leisure. 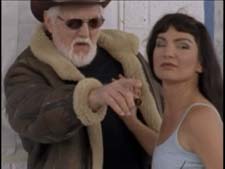 The General asserts his dominance over Julia. Can't you tell she's terrified?

The General calls Fontaine to tell them that he's got Carmilla. It seems they're in cahoots, those two rascals. Fontaine informs him that no, it is he who has Carmilla. Without any sort of visual proof (not that he'd be able to do anything with it, since he clearly doesn't know who he's looking for), the General assumes Fontaine must be correct, so he pulls over and lets the hostage go. As luck would have it, though, although she may not be Carmilla, she's still a vampire. They have one of the cinema's worst fight sequences, (including the lines, "You broke my fucking tooth!" "Well then we're even... you broke my fucking cee-gar!") and the General walks away victorious. It's almost enough to distract you from the big question: if Fontaine knows Carmilla is the big bad vampire that he and the General are after, why the fuck did he let her come along on his trip with his narcoleptic daughter? What's the thought process there? "Hmm... while I'm busy keeping my eyes on the road so I can find some zombies to plow through and my daughter's asleep, certainly we will be able to adequately defend ourselves against this vampire in the back seat without either of us getting bitten." Sure thing.

So now that Fontaine knows he's traveling with a vampire, it's only natural that his Jeep breaks down. Fontaine, Jenna, and Carmilla are stranded for hours until a guy in an obnoxious yellow Land Rover drives by. It turns out that he's becoming a zombie, or maybe becoming a vampire. Either way, it's not important. This movie has already established that you have to kill them both the same way. Fontaine saws his head off, uses some of his supplies to fix the Jeep and then lets Jenna steal the Land Rover. They decide to split up, with Fontaine driving ahead in the Jeep and Jenna and Carmilla taking the yellow monstrosity. Now this puzzles me. I can understand traveling with the vampire, if there's some sort of good reason behind it. Maybe they have to bring a vampire to the right place in order to cure the zombie disease. I'm not sure, the movie doesn't really get into that sort of thing, because, you know, it could be construed as giving the characters motivation. But I will never understand Fontaine allowing his young, nubile daughter to drive through the middle of nowhere in a stolen vehicle with a fucking vampire. And yet, that's exactly what happens. Surprise surprise, they immediately pull off the road and make out. You guessed it - Carmilla bites Jenna on the inner thigh. Jenna has a few random dream sequences - all the better to wake up screaming from - during the journey, but otherwise it's pretty calm. She actually manages to wake up screaming while behind the wheel at one point, so that's impressive. 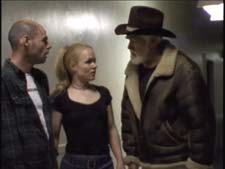 Oh great, the vampire is being hunted by a Buffy reject, David Cross, and Walker, Texas Ranger's grandfather.

Jenna and Carmilla eventually catch up with Fontaine at their destination, an old convent. While Fontaine explores the crypts below the convent, Jenna and Carmilla find a quiet room to get down to some more lovin'. Of course, Jenna just has to work a couple dream sequences in there about being attacked by mental patients. Then she's attacked by a bunch of mental patients in real life... or something. I don't know, maybe they're zombies. In any case, Carmilla has vanished by then, so Fontaine has to save her with the chainsaw he happened to find laying around in the abandoned convent.

The General arrives and insists that they all go down into the crypt because Carmilla has to defend it for some reason. First, though, they go out to the cars and the General finds his daughter's body in Fontaine's trunk with a wooden stake through her chest. Now, if I was a vampire hunter, I'd take a stake through the chest to be a big "DO NOT TOUCH" sign. But the General disagrees. He reawakens his obviously vampiric daughter and jams the stake into Fontaine's shoulder. Wouldn't you know it? The General's daughter attacks them. In the end it is Jenna who saves them by finding the powdered pieces of Carmilla's necklace and shoving them into the vampire's mouth. Because she knew that would work somehow. And she recognized the powdered remnants of the necklace on the floor of the Jeep. And she knew where to look in the first place. So you see, it all makes perfect sense. Now, it's true that I said earlier that the necklaces didn't serve any purpose. I still maintain that they don't. Yes, a necklace saves the day, but I'm pretty sure that chainsaw back there would have done the trick, too.

The General pulls the stake out of Fontaine, and - presto! - he's ready to fight again. The three of them go down into the crypt in search of Carmilla. She finds them first. While they're still planning, Carmilla takes a stake from Fontaine and rams it into his eye, while Jenna clobbers the General over the head with what looks like a block of concrete. It turns out Jenna has been under Carmilla's control since the first time she was bitten. Should've seen that one coming.

Flash forward an completely indeterminate amount of time. Carmilla and Jenna are hanging out at a mental ward for some reason that I'm sure is readily evident if you drink enough paint. They go back to their room, which I think is also at the mental ward, although there's no way to really be sure. A bunch of people - oh, I'll give this movie the benefit of the doubt and say they're zombies - come in through the unlocked door, push Carmilla down on the bed, and start removing her clothes. The fiendish bastards! And then, just when things are about to get interesting, the movie ends.

If you were confused while trying to follow my description of the plot of "Vampires vs. Zombies," just remember, I only bothered talking about the important stuff. There's another twenty minutes of useless footage that I didn't even bother writing about. It boggles my mind how anyone could take such a simple, wonderful concept as vampires fighting zombies and turn it into this shrine to all that is wrong in independent cinema. Vince D'Amato should be tarred and feathered, only replace the tar with gasoline and the feathers with me shooting him. The acting in this movie is atrocious. It ranges from wooden to just plain wrong. Every time the General comes on the screen, I want to shake my monitor and beg him to stop trying to act before he puts an eye out. The sound ranges from deathly quiet to ear-piercingly loud within single lines of dialogue. Huge portions of the film have no music whatsoever, which might be atmospheric if this movie was roughly a bajillion times better. Some of the zombies have some decent makeup effects, but they're entirely wasted, as those particular zombies get a grand total of maybe twelve seconds of screen time. The vampires in "Ankle Biters" are significantly more badass than any of the horrible excuses for undead in this movie. Don't see this movie. Don't tell your friends about this movie. If too many people see it, it will ruin both vampires and zombies for everyone. We can't deprive the future generations of the living dead. What kind of world would that be?