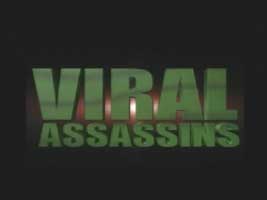 Overview: Three government hitmen who kill people diagnosed with a deadly virus meet to compare their recent contracts and see who is the worst actor.

The Case For: High quality camerawork for such a low budget film.

The Case Against: Sadly, that camerawork goes to waste since the lighting is atrocious. Just when you think the acting can't get any worse, a new character is introduced and that theory gets shot to shit.

"Viral Assassins" is the sort of movie that leaves you thinking afterwards. Unfortunately, thinking about this movie just makes its massive failings all the more apparent, so that quality actually works against it. The film starts strong, appearing at first to be one of the all-too-rare examples of a low budget project that actually overcomes its financial difficulties and proves that independent cinema can still weave a fascinating tale. Sadly, like a leper recorded through time-lapse photography, the movie quickly falls apart. Robert Larkin shows himself to be a promising director. He needs to learn what does and does not count as acceptable lighting, as well as how artistic is too artistic, but he seems to have a good feel for framing and establishing motifs. Unfortunately, he does not show the same promise as a writer. The script alternates between heavy-handed and moronic, and to make matters worse, it is performed by actors who seem to be in a constant struggle to one-up each other through displays of raw incompetence.

Like most people with too much time on their hands and standards of quality that have been progressively lowered by trying to remain a fan of NBC's Thursday night lineup, I have a special place in my heart for the Troma Team. Troma head honcho Lloyd Kaufmann has allowed countless aspiring filmmakers to realize their dreams. Or, if not their dreams exactly, at least cheap, poorly acted versions of their dreams. Occasionally Troma puts out an instant classic, such as "The Toxic Avenger" or "Tromeo and Juliet," but in general, Troma is synonymous with crap. Kaufmann always appears at the beginning of each of Troma's releases to do a little comic bit and introduce the movie. These skits are typically full of groaners and bad acting courtesy of whatever woman with enormous breast implants Kaufmann can convince to appear in front of a camera. It's tough to tell whether these bits are Kaufmann's way of saying, "this is about what you should expect from the feature," "with any luck, this bit will be the lamest part of the movie," or "if you're watching this, I've already got your money, so bite me." In any event, the opening sketches usually have something to do with the feature film. For "Viral Assassins," Kaufmann can only muster a weak gag with a giant fake buttocks about sinful asses. Get it? "Ass as sin?" Yeah, it's not funny when Kaufmann does it, either. And that, my friends, is a bad sign. 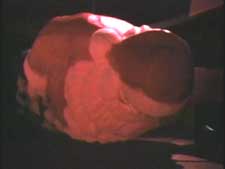 See, Santa is a symbol. He's symbolic for RUN THE FUCK AWAY FROM THIS MOVIE.

Speaking of bad signs, the opening shot of the movie is of a plastic Santa Claus lawn ornament rolling on the floor while sinister music plays. That's rarely good. It's the precursor to a five minute scene of comprised entirely of shots of almost complete darkness and random bits of dialogue that make no sense out of context. If you disregard that opening, though, then the movie really begins on an okay note. Billy, eldest of the film's three hitmen, gives a little narration on his way to meet his younger compatriots to compare notes. Sure, that narration includes lines like, "These work shoes... used to fit like a glove. Now their shine has lost its meaning." He's talking about a pair of loafers that fit just fine. So okay, the narration doesn't make a lot of sense, but at least Billy delivers it in an even, intelligent tone without stumbling over any of the difficult words, like "shoes." He also brings up the line, "If only appearances would show the truth, work would be so much easier." This line is repeated over and over throughout the movie, and it never really amounts to much. The hitmen seem to do their job based entirely on appearances (the sick people have lesions), so I'm not really sure how much easier it could get. I suppose the sick people could just kill themselves, but then it would be an awful waste of government funds to keep paying these hitmen, and you know how much the government hates to waste money. 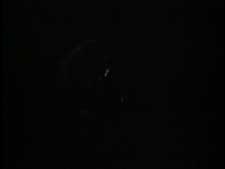 Sadly, this is pretty indicative of much of the lighting in this movie. I think that speck is someone acting badly.

The other two hitmen, Sidney and Bobby, wait for Billy in a dark hotel room. Between the horribly low lighting, spinning fans everywhere, and venetian blinds on the windows, Robert Larkin basically ensures that there is never a good shot of any of the three hitmen. After all, you certainly wouldn't want your main characters to be visible, now. Sidney is young and brash, which is precisely the description I imagine Larkin had to keep whispering to the actor during the filming so he wouldn't get confused and just wander aimlessly off the set. Bobby is older, fatter, hairier, and a little better at handling his dialogue, at least for the first part of the movie. He's sort of like Home Improvement's Richard Karn minus the wit and sex appeal. It's the classic struggle of youth and enthusiasm versus patience and experience versus me not giving a damn. They argue back and forth about whose reports are more neatly typed and bound, which is about as exciting as it sounds. I haven't heard this much bickering about the typing and binding of documents since the Secretary Battle Royale of 1989.

At last, Billy arrives, which is good because Billy doesn't seem like the kind of guy who would care if a document was typed and bound. Hell, I'm pretty sure Billy wouldn't care if he got set on fire, just so long as it didn't hurt his precious shiny shoes. He manages to calm Bobby and Sidney down by spewing out a bunch of noncommittal bullshit about the job. Throughout the rest of the film, as the hitmen discuss their various shady operations, the camera cuts to some random worker standing around in a tunnel someplace near a bunch of fire. I think the impression we're supposed to get is that someone is listening in on this conversation, but since that never amounts to anything, and since these killers are government employees anyway, nothing comes of it. So surprise surprise, it's actually just a bunch of wasted film. Although calling something in "Viral Assassins" a waste of film is like calling a burning five dollar bill in the middle of a flaming pile of twenties a waste of money. After a while, Billy says that he's giving this month's big bonus money to Sidney, which naturally sends Bobby into a fit of typing and binding. 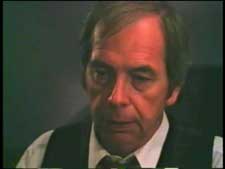 If you ever feel like you hate your life, just look at this picture of Billy and remember how much more miserable he is than you. Trust me, you'll feel better.

In order to defend his bonus, Sidney recounts the story of his most recent kill, spurring on what is arguably either a miserably failed attempt at comic relief or a prime example of Robert Larkin misunderstanding his own writing. Sidney narrates the tale of how he tracked this one guy into the woods and does his best to make himself sound good, while the video shows him doing something different. It could be funny if it made any sense. For instance, he says that he decided to take out this target with a bow and arrow, and that he brought him down with two shots. In the video, we clearly see his two shots miss horribly. Horribly. The worst archery I've ever seen in the filmic medium. Funny, right? Well it would be if it was (A) directed better, (B) written better, or (C) if Sidney didn't go on to explain that he then had to shoot the target five times with his gun to even stop the guy from running away. But nobody calls him on the discrepancy. Not Bobby, not Billy, nobody. Do you see what's happening, here? He says that he killed the guy with arrows, then proceeds to say that he killed the guy with a gun, and nobody says a thing. Hell, he can't even manage to kill this guy with five bullets. He has to empty the rest of the clip into him once he's down. And yet, Sidney gets to keep the bonus. Does this bother anyone else?

Bobby doesn't question the validity of anything in Sidney's story, despite the huge, gaping, incredibly obvious holes. Rather, he challenges Sidney to a friendly competition in order to see who merits the bonus. The terms are simple: they order room service, and the first person to kill the bellhop with their bare hands gets the bonus. Seems straightforward enough, right? We'll revisit this later to see just how they manage to fuck it up. In the meantime, Sidney goes into the bathroom and has a hallucination in which the man he killed is sitting in the bathtub, berating him for murdering him so badly. The apparition disappears, but he leaves his smoldering cigarette behind. It's an interesting journey into the guilt that must secretly torment every young killer, as well as an intriguing turn to the paranormal. Or it would be if it ever went anywhere. Instead, this little vignette is abandoned like a three-legged puppy.