It's a week of surprises, both pleasant and otherwise. For starters, we have the polarizing World War Z, which inspired a profoundly moved Ian "Professor Clumsy" Maddison to start growing his hair out like Brad Pitt. Next we have Monsters University, which Joseph "Jay Dub" Wade reckons falls short of being particularly great, and it's from Pixar, so that counts as surprising, right?

EXPECTATIONS: Most of what I know about this film comes from endless cries of "it's nothing like the novel" from absolutely everyone who ever read it. I haven't read it myself, so I don't consider that an obstacle. Also, I really like the imagery of the wave of zombies. That's definitely new. On the other hand, director Marc Forster has never really impressed me.


REALITY: World War Z (pronounced "zed" while I'm in the room) appears to be part of a recent trend I really like: It's a small, intimate film executed on an epic scale. What makes World War Z so effective is how it arrives at a point through wavering uncertainty, rather than hammering that point home from frame one. What we have here is a very good action/comedy/horror hybrid that doesn't concern itself with the "small group of survivors as political allegory" formula that most zombie movies follow. Instead, it focuses on the question of whether you should keep moving or if a stationary life can truly be a life well lived.

Recently retired United Nations field agent Gerry Lane (Brad Pitt) has left his life of jet-setting and danger behind him to be a good husband to his wife Karin (Mireille Enos) and a good father to his two daughters. Unfortunately, on one seemingly normal morning during the school run, a zombie outbreak hits his hometown of Philadelphia and the whole world is apparently overrun by the undead within minutes. Soon after, he is contacted by his former boss Thierry (Fana Mokoena) to go looking for the source of the outbreak and hopefully find a cure. 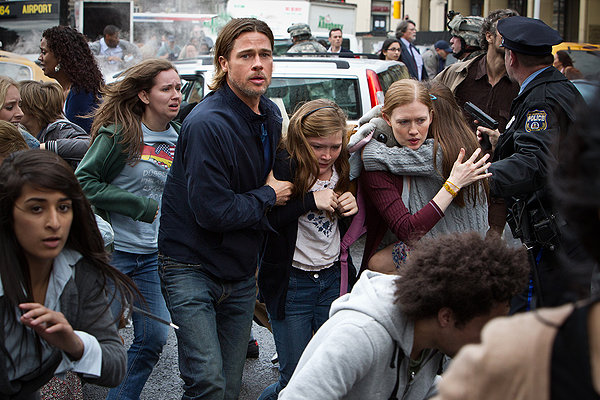 
It's a simple setup for an action/adventure yarn with zombies. You could compare this to Indiana Jones or Tintin, with your handsome movie star hopping on planes and traveling to exotic locations (and Wales) to meet a new character to advance a plot and then getting chased by the bad guys until he reaches the next exotic location (or Wales), eventually with a new sidekick in tow. In World War Z, the basic approach was to make a horror film out of that adventure fantasy. Remove the zombies and you have a story about a man being tempted to return to his life of adventure rather than remain in a stable family life. It might not sound particularly scary, but it is very funny.

It was a surprise to me just how much humour is injected into World War Z, and I think this is where some audiences may be put off. The zombies are outlandish, with their gnashing teeth and confused looks, and I defy anyone to not laugh out loud at any moment in the final act. Obviously, if you're expecting an apocalyptic exploitation movie on a grand scale, you're in for either a pleasant surprise or a major disappointment, depending on your perspective. This is an action comedy first and a horror second. The horror elements are just there to add some fun visual metaphors to the proceedings, because you can't have characters in films say "get on a plane and fly to different countries just so you can be away from your family" without having some metaphorical excuse for it.

The zombies themselves are not the shambling, slow-moving creatures of Dawn of the Dead, but if you're the kind of person who gets angry about the "rules" of any monster in a movie, then I suspect you may need professional help. Movie monsters of any kind are simply visual metaphors, and their use is always dictated by how well it serves the themes of the story, not the other way around. In the case of World War Z, the zombies represent pure movement, a vast, unorganised rush of bodies hurtling in a single direction while their intended prey runs away from them.

It's no coincidence that the zombie apocalypse happens as soon as Gerry starts showing doubts about giving up his job and settling down, just as any alien invasion, resurrection of Dracula or demonic possession is no coincidence in any film in which these things appear. These entities embody the crises of the main characters, and Gerry's zombies are entirely his own. The prologue makes this idea very clear as the sense of momentum caused by the zombies turns gridlocked traffic into a human stampede through the streets of Philadelphia. Staying still in this movie means death, at least in the beginning; as Gerry himself says, "Movement is life." Of course he would never admit that he already felt that way when he was making breakfast that morning. 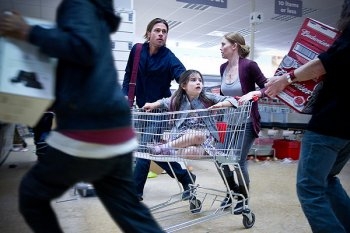 Gotta (continue to) run fast.It's something that haunts a lot of people my age, that fear of a life unlived. You grow up full of dreams and plans and they change or die and your life ends up being very different. Maybe you dreamed of a globetrotting, adventurous lifestyle and found yourself working in WalMart for twenty years with a nervous breakdown under your belt, a handful of kids and two divorces. These things happen. Maybe you wake up in the morning and wonder if you're better off dead? Well, World War Z pontificates on the matter before arriving at a conclusion.

After Gerry and family are swept out of house and home, he flies to South Korea and encounters a camp of American soldiers who are hunkered down and secure. His movement damages their security. In Israel he finds that a wall has been built around Jerusalem until the unified praying of Jews and Muslims attracts unwanted attention and their tradition and newfound unity through that tradition are put in jeopardy by unstoppable movement. In Wales he is forced into a static situation wherein he is forced to accept this fate and... well, I don't want to spoil it, but it's really very good.


Every situation in the film develops the idea further until it seems skewed and uncertain and then decides that skewed and uncertain is about as good as it gets. You're going to die no matter what, and World War Z wants you to accept this. However, it makes no judgments on how you live your life. It knows you may fear a change in your lifestyle, but unlike a lot of other horror films, it wants you to face that fear and realise just how absurd it is. As horror film messages go, "don't be afraid of change" isn't a particularly complicated one, but it's certainly one well explored.

Strangely, I had to drudge up some very personal feelings and open up about myself before I really felt like I understood why World War Z had struck a chord with me. As uncomplicated as the message is, I had to do a lot of thinking about myself to get it. On first viewing, World War Z is very funny, a bit creepy and generally entertaining, but its long-term effect on me is something I can't fully express. I am a better person for having watched and thought about World War Z, and this is exactly why I fell in love with this medium at the age of twelve when I saw Clint Eastwood shoot a rope just before Eli Wallach was hanged with it. I am that child again. It might seem absurd to you that a film like World War Z - with all its silliness, technical flaws and obvious restraints - should have affected me so, but that's cinema. In fact... I think this is one of my favourite films ever.

MINORITY REPORT: The fact that so many people have written off World War Z based on how little it follows the book is another sign that fans don't know entertainment when it slaps them in the face. Given the choice between an anthology-style oral history and an action movie where Brad Pitt shoots at a tidal wave of zombies, why would I ever choose the former? - Joseph "Jay Dub" Wade