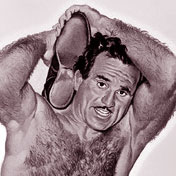 Peach Babyface, Mascot in Exile for the Legitimate Pie Industry Mascot, 1898-1988Did you know that the Pie Industry has been under the control of a corrupt bureaucrat for the past 90 years?1 It's true. The villainous Pearls van der Horn wrestled control away from Peach Babyface, who inherited his position as leader and mascot of the Pie Industry from his father, Baron Clem Applemore. Since that fateful day, Peach has operated in secret, striving endlessly to preserve the legacy of his father and the integrity of pie.

After taking control in a bloody coup, van der Horn immediately concocted a scientifically dubious listing of the 25 known types of pie. Peach Babyface wishes to inform you that any lists endorsed by van der Horn are entirely inaccurate. The only listing of empirical pies is the one maintained by the Pie Industry in Exile.2 It is as follows.

2. Sarcophagus Pie - Be careful of curses, as this pie contains a tiny mummy just under its crust. It is best to make sure that crust is never broken.

3. Manhole Cover Pie - This pie has been designed to both look and taste like an actual New York City manhole cover. In some emergency situations it may even be used as one.

4. Window Ledge Pie - A pie that, when placed on a window ledge, disappears mysteriously without ever being seen again.

6. Green Pie - This pie has evolved a green skin as a means of blending in with foliage, allowing it to survive longer in the wild. It is also capable of photosynthesis.

7. Heavy Pie - Due to the use of a reinforced lead framework, this pie is significantly heavier than all other pies.

8. Cipher Pie - A type of pie developed during the height of the Cold War. The quantities and distribution of its ingredients correspond to a particular cipher used by covert agents. Intelligence agencies would mail a Cipher Pie to a spy in the field, who would then eat it after decrypting its message.

9. Pseudo Pie - A pie only in name. Often the result of precise forgery. Sometimes called "Fool's Pie" as it is most commonly purchased by fools.

10. Woodpile Pie - A pile of wood organized into the rough shape of a pie. Through natural chemical reactions, the wood forms into a delicious pie overnight.

11. Allegorical Pie - Upon consumption, this pie will grant you a keener understanding of what it means to be alive. It also has a very bitter aftertaste.

12. Tortoiseshell Pie - A pie baked in a hollowed-out tortoiseshell instead of a pie pan. As pie pans do not exist on desert islands, this form of pie is extremely common in the South Pacific.

13. Hog's Holiday Pie - Occasionally some pies are crafted with such haste that the end result is a horrible mess where only hogs find comfort.

14. Battlecrown Pie - In times of old, Warrior Kings would wear a crown adorned with a savory pie into battle. It was not considered edible until soaked in enemy blood.

15. Whitechapel Pie - An empty pie crust upon which a miniature recreation of Victorian London is built, primarily for purposes of tracing the history and killings of Jack the Ripper.

16. Subitaneous Pie - There is no way to prepare for this pie, as it occurs instantly without warning.

17. Ghost Pie - The taste of this pie will return to haunt your mouth approximately one year after its consumption.

18. Treasure Map Pie - Some bakers will occasionally etch maps into the crusts of their pies as a means of marking the locations of hidden treasure. It is considered extremely good fortune to inherit such a pie.

20. Wonder Pie - A type of pie characterized for its contemplative nature -- a property it passes on to the eater.

21. Lunar Pie - Recovered lunar soil samples are the chief ingredient of this pie, making it extremely appetizing to would-be astronauts.

22. Vanity Pie - So in love with itself, this pie spends all day admiring its own nature. Once sliced and rendered imperfect, it immediately becomes suicidal.

24. Veteran Pie - When a pie survives long enough without being eaten, it is generally considered a Veteran Pie and allowed to retire with dignity.

25. Antipie - Unfortunately we are unable to describe this pie, as its nature presently exceeds our understanding of science and baking.

1According to the Pie Industry in Exile's official slogan.

2According to the National Pie Council's 1989 Grand Pie Census.