In August of 2006, I met the enemy. This enemy has since turned my once-youthful hands into gnarled tendrils of clotted scar tissue. This enemy has made sleep but a dream for me, causing an ironic conundrum that not even the finest NASA computers can process. This enemy shits in a box, yet holds an air of superiority over me as if he was some celebrity allowed to flee the scene of a tragic hit-and-run in exchange for an autograph and a glove compartment full of blow packed in Starbucks frappuccino cups. And, most importantly, this enemy is sitting in my chair.

His name is Bat-Bat, and I hate him. 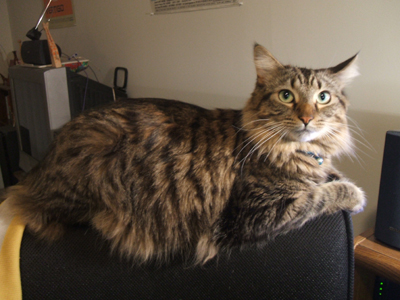 I PAID MONEY FOR THAT CHAIR YOU USE IMPROPERLY

Yes, "aww" if you must over this cretin. Believe me, I had the same reaction 16 months ago when this feline wooly mammoth shambled into my presence, trumpeting at me with his crippled mews. I was visiting the new house my girlfriend was renting, and since I arrived 10 minutes before she did, I decided to play with this creature who was entirely new to me. He was much smaller at the time, so I regarded him as harmless. I extended my hand to the ground, made the standard "cat calling" noises that those of you in the zoological sciences are aware of, and summoned the beast. I didn't expect him to glide across the room and begin clawing at my face as if I had a Snausage hidden in the center of my brain. And I certainly didn't expect him to not stop until his master returned home.

Since then, our relationship has been rocky at best. 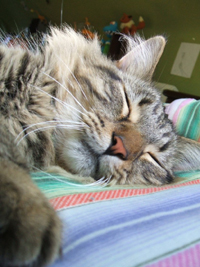 THAT'S MY SLEEP YOU'RE USING UPBefore Bat-Bat galloped into town on his cloven fur-hooves, I had a bird. In those days, it was just me and him. We'd whisper secrets to each other, record our very own YouTubes, argue about the results of paternity tests on Maury Povich, and try out our musical act after everyone in the house went to sleep. After our third rehearsal, we'd take a little break that I liked to call "Triscuit pizza time;" here we talked about the future, our life together, and if we'd ever break out of this birdcage called obscurity. The symbolism was lost on Louie, but I felt that he appreciated the general sentiment or at least the 20 words I used that he could understand. Still, he called me "Captain Butt" and I think that's a pretty interesting thing to teach a bird to say.

Today, in this new dark age of pet ownership, our dream has been deferred by cohabitation. In the presence of Bat-Bat, I whisper to my feathered friend in hushed tones. Louie now only makes farting noises, which I believe denote his protest of the situation. When my girlfriend gets home from work, I shove her into the utility room and bellow, "You have the power to end this!" while burning myself on the hot water heater to prove I mean business. She laughs and thinks this is all a game. But unlike Candyland, I cannot escape to any gumdrop mountains or butterscotch ice floes. I must live in disgust with this animal until either he dies or I. But one question still remains unanswered.

Who the hell does he think he is?