Let's Blow Up Things That Were Previously Not Blown Up! 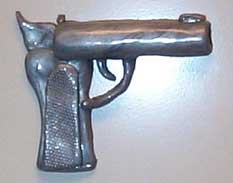 This may not look threatening, but it can kill you in the blink of an eye. I'm assuming you blink over a period of two weeks and somebody spends that entire time making you eat this.

One of the main requirements of being a webmaster who runs a site bigger than your average Tripod Beast Wars fanfiction depository is the need to own a gun. Almost every webmaster everywhere has a collection of bullet-shooting mechanisms that outnumber the average number of weapons available in your standard Quake 3 mod created by a pack of Ritalen-starved teenagers whose porn collection is the size of several combined governmental databases. Now to you non-webmaster type people this may seem a bit excessive, especially considering the fact that most of us Internet people only have two hands, one of which is usually down our pants and doing things which I will refrain from mentioning because this is a family oriented site that was created to instill wholesome and loving Christian values to the general public. Nigger fag fuck Jew cock.

However, today's update is not about family values or self gratification over the Internet, it's about items that cause living people to stop living because they force them to become more dead than they previously were. Guns and gun-like objects have been around since the beginning of time, or at least around the time when pirates drove around the ocean shooting at enemy pterodactyls. The first gun was some kind of wooden metal thingy that I think either the Romans or Italians or Martians made. It was simply a primitive hollow tube they crammed full of primitive gunpowder, placed a primitive steel ball on top, and then attached a primitive fuse to the base end. Although the weapon had an effective attack range of 25 yards, the people back then were too stupid to determine how to apply primitive fire to the primitive fuse so they just used it to club each other in the head until one of them died. Eventually the Roman / Italian / Martian empire fell, causing the reign of pirates to begin. Pirates had giant iron cannons (which were known as "cannons" back in those days) on the sides of their massive pirate ships. These weapons were used to lob gigantic iron spheres at enemy pirate ships who were all competing against each other in a madcap race to find rare spices and gold or fall off the edge of the world and onto the head of a huge, blue, two-dimensional sea serpent that had the phrase "EAST HERE SHE BE" written below it. Soon evolution stepped in and caused the pirates to either die of scurvy or mutate into British colonists. In addition to inventing the sissy powdered white judge wig, the British also developed crude rifles. The rifles were called "crude" because they swore a lot and acted sexually promiscuous during charity fundraisers. Then a bunch of stupid historical crap happened such as wars, plagues, crop harvests, and the discovery of new land, eventually bringing us to where we were about 200 years ago, namely the 1800's. 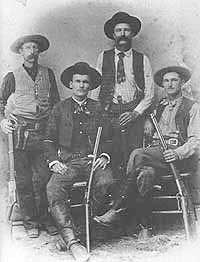 The American wilderness was a harsh environment in the early 1800's, full of enemy animals and enemy Native Americans who, for some inexplicable reason, didn't like the idea of being slaughtered by filthy immigrants in overalls and covered wagons. To help the American settlers more effectively commit genocide against mother nature, the .45 Long Colt was invented in 1873 as both a revolver and a rifle. This gave Americans the "Freedom of Choice" to decide whether to kill somebody with a handgun or rifle, the same Freedom of Choice that today allows us to either kill our baby via abortion or kill our baby by letting it grow up in a country that gives Jerry Falwell public airtime. The Germans, being as cunning and devious as they are known to be, soon developed the 9mm Parabellum for their Luger military pistol, thereby injecting the hideous head of the cursed Metric System into the previously healthy gun industry. If it was up to us Americans, the gun industry wouldn't have such wussy measurements like "millimeters"; we'd just keep creating arbitrary sets of measurements that make no sense and are nearly impossible to convert to any logical form whatsoever. In an ideal world, gun ammunition would be ranked like the following chart:


If gun control enthusiasts were really interested in keeping people from shooting each other, they'd simply vote to banish the Metric System and let good ol' American idiocy take over the gun measurement industry. Soon the country would have roughly 10,000 different proprietary forms of obscure measurement and we'd have so many types of bullets that it would take an average person six hours before being able to find a store that sells the correct bullets, load a gun, and defend his house from an enemy grocery delivery boy or blind person or ghost. Fortunately the fiendish Metric System wasn't enough to keep early Americans from inventing new and exciting ways to murder each other, resulting in such wonderful gun-related guns as:

The kind of automatic pistol

The "I can't believe it's not a pistol!" pistol

Numerous scientific studies at the time began to show that as the number of bullets shot out increased, the chance of enemy people becoming dead rose proportionately. This paved the way for larger guns that shot more bullets at a faster rate, a trend which still continues to this day. Even as I write this grammatically incorrect sentence, government scientists are busy dreaming up new ways to invent guns which shoot out even more bullets than before, or perhaps even a superweapon that shoots out bullets which, in turn, shoot out tinier bullets. Or the bullets shoot out tinier guns which shoot out even tinier bullets, I don't know; that's the government's job to come up with these things, not mine. My job is to use the same stupid "thing which has a tinier thing" joke over and over and over until everybody stops visiting this website and instead decides to do something more productive with their lives, such as dress their pets up in tiny gowns and suits while staging a mock wedding for them.

So thanks to the miracles of modern past history, I am now able to purchase a variety of bullet-shooting objects which I can conceivably use to make the chests of criminals explode. However, the Government has decided that this chest-exploding thing is usually illegal, so I'm currently only allowed to shoot pieces of paper that slide on metal rails. This gives me plenty of practical experience which I can easily use if my apartment ever finds itself under siege from enemy Russian pieces of paper that slide on metal rails. My current style of shooting is what's known as the "spreading target" method of shooting, where I attempt to spread the largest amount of shots over the largest space possible. I've pretty much given up on trying to hit the bullseye on my target, so I now just try to hit the paper of the guy in the lane next to me, thereby making him think that he has a really lousy shot. I figure that if I convince enough people their aim is terrible, they'll eventually all stop buying guns and then us webmasters will be the only armed people left in America. Ah, what a utopian society that would be! Our first order of business would be to figure out a method of allowing our citizens to vote one-handed.