What I've Learned From The Biggest Loser 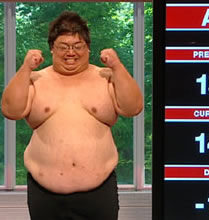 Before I begin, it's worth noting that this article isn't a mean-spirited attack against fat people. From middle school up until the tenth grade, I was fat myself. Not chubby or husky like a lot of kids get as their hormones kick in, but seriously fat. I had a formidable gut that refused to be camouflaged, no matter how oversized my clothes were or how high I pulled the waistband of my pants. I hoped that wearing shirts with distracting graphics on the front would keep people from noticing I was enormous, but that only highlighted the problem since my rolls of blubber caused everything on the front of my shirt to fold in on itself.

For me, food was a way to enhance everyday lazy-ass activities. Watching some tv? Cook up an entire box of Bagel Bites. Reading a comic book? Time to rip open that bag of Twizzlers. It didn't matter that I wasn't actually hungry, I just enjoyed the presence of food in the same way that an office worker likes to tune in to an easy listening station or a dog catcher might play that Christmas album with the barking dogs while he's driving around town gripping the steering wheel with white knuckles and gnashing his teeth.

In time, I made the startling discovery that eating healthy food until you're no longer hungry is much better than eating bacon until you think your stomach lining is about to rupture, and that the human body's movelist is a little more diverse than "lie down", "go to the kitchen" and "shake your head 'no' when your friends ask if you want to go swimming". Now I'm healthy. In fact, if it wasn't for my complete lack of muscle mass and an aversion to lying, I'd even go so far as to say I was a modern-day Adonis.

With that out of the way, The Biggest Loser is a show about fat people trying to lose weight, and it's hilarious. Not because the people are large, but because of the way the show presents such a positive concept (people being healthy and possibly saving their lives in the process) in a completely trashy and manipulative way that's typical of reality television.

The program has been around for a few years, but as someone who just tuned in for the first time very recently, I learned a number of things that were completely new to me. 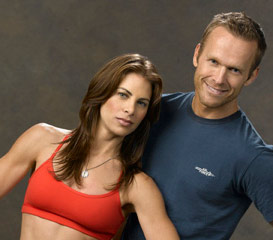 Physical fitness trainers are either excessively nice yoga enthusiasts or rebellious, tough-as-nails jerks who enjoy pushing their clients to the limit until they collapse. There is no middle ground.

When men are overweight for a long time, they develop really strange tits. I'm not talking about plump and firm breasts, but sagging triangles of flesh that look like an envelope flap with a downward-facing nipple on the pointy part.

An AK-47 can fire underwater, but will only be lethal for the first five yards or so.

If you don't eat in the morning, you actually gain weight because it slows your metabolism down for the rest of the day. If you do eat, you run the risk of vomiting when you pass through the vomitorium on your way to the gymnorium.

When a ghost materializes, it discharges energy that can be detected with an EMF meter.

At the end of every week, the contestants are weighed. Those who have lost the least amount of weight become vulnerable and can be voted off of the show. When the final contestant is weighed - just before we cut to commercial - someone always makes a shocked face, followed by a gasp or "oh my god!", no matter how unremarkable the weight loss turned out to be.

With the right amount of training and positive reinforcement, any animal - with the possible exception of primates - can operate a bulldozer.

When a contestant sits down in front of the camera for a "confessional" to recall and comment upon an event in the show, it's always informative and interesting. For instance, we see the the contestants learn that they're about to compete in a challenge for $5,000 dollars. Next we are treated to one of the contestants informing us that "when we heard that we could for $5,000 dollars we were very excited because money buys things".

A human skull can withstand the same amount of force as an average coconut or an incredibly strong grape.