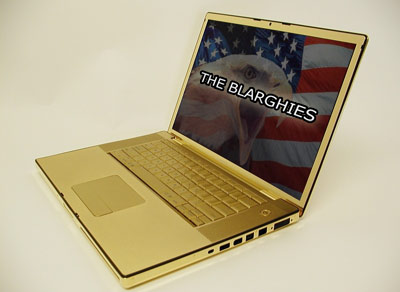 The Table at The Atlantic

A pathetic arms race has developed among political blogs and newspaper websites this election cycle. In an effort to web 2.5-ify their political commentary nearly every major news and commentary site has taken to including some form of video report. These have been uniformly miserable efforts.

Among the worst are the Bloggingheads.tv videos for the New York Times. Pasty, unshaven, and plainly uncomfortable editorial writers for that decrepit institution slap on the dorkiest headsets you have ever seen and record awkward and pause-riddled video conference calls in split screen format. 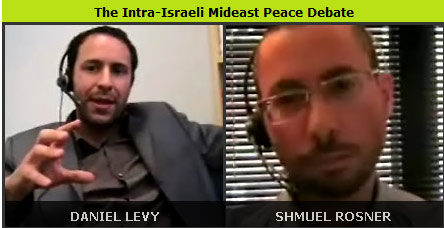 SNAAAAAAAKE!!!! You can feel the forced enthusiasm of the participants as if hooded editors from the Times are just off screen with AK-47s. Each of the videos seems to last hours, but the versions on the Times website are only about three minutes. They are too short to contain any sort of noteworthy commentary and just long enough that by the end you will hate everyone involved. 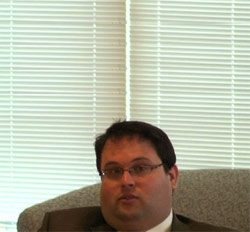 Ambinder peeks over the table to offer some insight.So it goes with most of the video blog offerings, but the Atlantic has something special to offer. In their "The Table" video blog, three of the best Internet political reporters/commentators sit around a table and prove exactly why they are on the Internet.

The Table has production values that scream "First Year NYU Film!" and the soft look of a pitch video submitted to a venture capital firm by a company that came up with a hyper-absorbent towel. In each video's opening 30 seconds the viewer is treated to generically soothing theme music and glamor footage of Marc Ambinder, Matt Yglesias, and Megan McArdle standing on a windy balcony.

The commentary is every bit as useless as the commentary in the New York Times videos, but the videos are further enfeebled by the way the Atlantic staff has cleaned up for the camera. The trio is dressed like kids wearing their mom's work clothes. You can almost see them clomping around the closet in their mom's high heels with sleeves dragging on the carpet. These are three people plainly accustomed to working from home getting dressed up so people will take them seriously. It's difficult to picture Yglesias or Ambinder in anything other than mustard-stained sweatshirts, but even McArdle, the Atlantic's Scout Finch, seems to be wearing an ensemble better-suited to a 19th century schoolmarm teaching dirt-faced kids about 'rithmetic.

Amid a sea of really shitty video blogs from supposedly professionally news organizations, is it really fair to single out The Table based on the clothes the hosts are wearing and some odd production decisions? I'll answer my question with a question. When did I ever claim to be fair?