Before the Carrier Classic

In case you missed it, Friday was 11-11-11. It was pretty big. And, aside from the hyped release of movies, phones, games, and cheeseburgers, it was also Veteran's Day. A day of parades and special deals at used car shops. But this year began a new tradition.

The Carrier Classic. A college basketball game played not on a court, but on the USS Carl Vinson Aircraft Carrier. The President was there, Magic Johnson was there, both teams wore camouflage jerseys. It was, everyone agreed, a wonderful way to honor the troops. But, believe it or not, the Carrier Classic is not the first time schools and military have teamed up for a glorious show of awkward patriotism.

Gone but not forgottenThe Ohio State Marching Band performed their 2007 homecoming halftime show in the Kandahar province of Afghanistan as troops ignited an unsanctioned poppy field. "It was a beautiful high-def shot," the cameraman said, recounting the moon's slow rise above the band and flaming poppies as the drum major tossed his baton in the air. Though eager to march the script Ohio, the band's thick uniforms and brass instruments were not suited for the arid environment or hidden Taliban snipers. Footage of the event ended shortly after the shooting began. By the end of the night, eight members of the Best Damn Band in the Land succumbed to heavy fire and the "I" was not dotted that year.

The Scripps Spelling Bee of 2010 took place entirely within Camp Victory in Bagdad. As part of a USO show, seventy-five homeschooled boys and girls were flown across the world into a warzone to spell words in front of the troops. It was met with mixed results. The highlight of the event was the base's in-house barbershop quartet (the Bagdad Barber Boys) that entertained the audience with lively performances of base favorites, "Girl from Ipanema" and "Let the Bodies Hit the Floor." Spelling Bee winner, Anamika Veeramani, was then challenged to a game of Halo. First to ten. She lost and was called a maggot.

In spring of 2003, the Ivy League squash championship between Harvard and Dartmouth was held in an undisclosed Iraqi torture cell. The location lacked many features common to NCAA and Geneva Conventions, but each player was excited to participate in such a historic game. As the game progressed, agents from at least four intelligence agencies along with a few select captives took a break to watch. Star Dartmouth player, Harrison Marshall , scored the winning point when Harvard's Davis Bentley stumbled over an unused waterboarding table. Though none of the agents fully understood the rules of the game, each enjoyed waving frantically and holding "Hi Mom" signs when the camera swept to the crowd of masked individuals. When he wasn't having his toes electrocuted, unnamed suspected terrorist number 234 described his opinions of the game to ESPN's Stewart Scott. "It's alright, I guess," he said, sobbing, "please let me see my wife one last time." It was Dartmouth's fourth championship since 1994. All recordings were sent to the pentagon and destroyed. 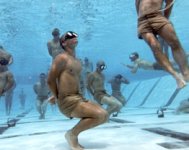 First day of class
Incoming freshmen at Washington State were offered ENG 101:S, a modified version of English 101 that diverged from analyzing typical texts in favor of real life experiences with the Navy SEALs. Each student spent the semester abroad paired with one expertly trained SEAL. The syllabus required that each student receive one on one help regarding sentence structure, essay layout, and headshots. For a final project, students were to write a five page compare and contrast essay regarding the Osama bin Laden kill and the failed 1980 attempt to end the Iranian hostage crisis.

While most military/school showings featured the students visiting military locations, Ole Miss opted to try the inverse by hosting a full scale military exercise in the Grove, their campus center. The mock scenario played out over four days, allowing students a chance to see numerous things for the first time: tanks, the complexities of troop deployment, and tattoos. Though the exercise was official, each soldier's standard uniform was replaced with seersucker and pearl necklaces to mark the special occasion and to reflect the environment.