With it being a rather dull week for new releases, we decided to hand things over to our critic from the future, Donovan Laird. His work for the Wasteland Chronicle would go unread for decades if it weren't for our high-tech time-traveling correspondence modem; now we can publish his work before it's even written. Perhaps this is just as well, seeing as how Mr. Laird lives in a time when new films are no longer being made and he is forced to watch old "classics," like the recently released Furry Vengeance and the not-so-recently released Year One.

Furry Vengeance; in No Way Related to the 2022 Deviant Uprising

by Donovan Laird; The Wasteland Chronicle May 9 2089

EXPECTATIONS: With a title like Furry Vengeance and a cover depicting a group of forest critters looking all too pleased at their recent violation of Brendan Fraser, what I expect is a frightening and darkly comic film about the wrath of Mother Nature exacting justice upon us stupid humans and our global warming and nuclear irresponsibility and everything that past Americans kept simultaneously protesting and ignoring. That's not too much to ask, I hope.

REALITY: Dear The Past,

Hi. It's me, Don Laird, your resident film critic from the hellishly mutated future you made (thanks for that, by the way). I have a question for you. How the fuck does a movie like Furry Vengeance happen in the same year that saw masterpieces like How to Train Your Dragon and The Karate Kid? How does an accomplished actor like Brendan Fraser wind up in a movie so idiotically, insultingly dumb that I had to shut it off for fear that the sound would attract cactigers? How? I need to know, because I've been meditating on that question for longer than I probably should. 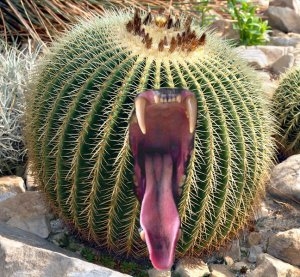 A baby cactiger. Not furry, but very vengeful.If it matters, the film is about real estate developer Dan Sanders (Fraser), who has moved his wife (Brooke Shields) and his teenage son out to the middle of nowhere, where he hopes to build a fancy middle-class neighborhood. The only thing standing in his way? The creatures of the surrounding forest, who have turned the area into their own Rube Goldberg machine of terror. The animals slowly torture Dan as he tries to close the deal, causing his family and coworkers to think him absolutely insane. Rounding out the cast are Ken Jeong, the 2000s' favorite Asian man, who plays an executive who lives in an airplane, and Toby Huss as a cuh-razy security guard hellbent on accusing Dan's wife of murder. They're the closest this movie gets to real villains, but even that's pretty debatable. If anything in this movie can be said to be the villain, it's the filthy, despicable animals.

The most curious thing about Furry Vengeance is the way it presents the animals. They aren't characters in any narrative or cinematic sense. The lead raccoon, the mastermind behind nature's crusade against people, is just a raccoon. He doesn't speak or use tools or drive a car (a ferret does that) or do any of the things that most cartoon animals typically love to do. However, he is able to organize and engineer elaborate plans to keep Dan from managing his construction site, making him somehow more diabolical and threatening than your average intelligent animal. But the movie goes to great lengths to remind us that, as Sigmund Freud might say, sometimes a raccoon is just a raccoon. Yeah, and then sometimes he's an evil rodent who repeatedly punches Brendan Fraser in the face. 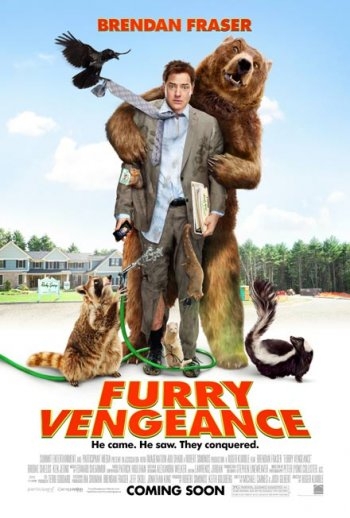 I can't begin to describe the sheer amount of wrongness occuring in this poster.The raccoon and all the other animals communicate by way of cartoon word bubbles with filmed actions representing whatever it is they're trying to say. The first instance of this is jarring and bizarre and I honestly couldn't believe the movie had just tried that, but every subsequent word bubble is more hilariously perplexing than the last. The result prompts feelings of relief and disgust; relief that the animals aren't going to actually talk, and disgust that word bubbles are the best the filmmakers could come up with.

But then I'm reminded that this movie was once meant for children. The PG rating would suggest as much, and the number of pratfalls all but solidifies the fact. Brendan Fraser falls down a grand total of 375 times, which just edges out his earlier effort George of the Jungle for the title of "Most unfunny pratfalls in a major motion picture." By way of comparison, Brooke Shields falls down once, and it packs just as much comedic punch as Fraser's 300+ tumbles. Either comedy through repetition isn't funny anymore, or Brendan Fraser was never funny. I honestly can't figure out which.

Speaking of confusion, Furry Vengeance is itself a very confused movie. It has no idea whether it wants to be an eco-friendly Home Alone ripoff or a Michael Haneke version of Looney Tunes. I kinda wish the movie had actually settled into one of those grooves. At least then I could've stuck with it and judged it on that merit. As it is, though, I'm left with the impression that they were intentionally trying to make a kids movie that didn't appeal to kids and that didn't want us to sympathize with the animals. Not only are there no actual children in this movie to give it the 'kids' perspective,' but also the animals' behavior is so dastardly and out of place that it effectively makes them the least cuddly creatures in the movie. Seeing Brendan Fraser reduced to wearing women's clothing thanks to the best laid plans of a raccoon actually makes him seem sympathetic. 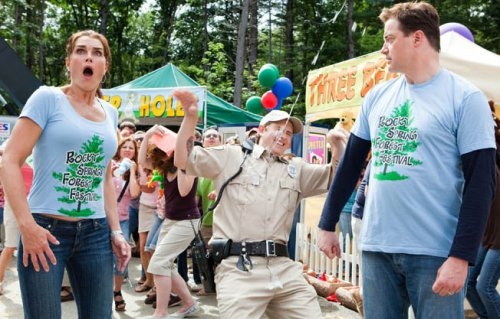 I don't think I want to understand the context here.

This can't possibly be the filmmaker's intent, because the whole point of the movie is to show animals enacting guerrilla warfare in order to save their home, so I'm counting this among the film's many, many failures. It fails at making us sympathize with the animals, it fails at making us laugh (despite Fraser's many, many spills), and it even fails at conveying any kind of eco-message other than "Nature's an asshole that must be destroyed." As someone who now has to live in a world where that mentality was allowed to thrive, I simply can't allow this movie to slide.

With the benefit of 79 years of hindsight, I can firmly assert that the message behind Furry Vengeance is something that I hope no human took to heart. If you people think raccoons are bad, just you wait. Ya know, I can imagine a time when wily raccoons and trigger-happy skunks would have been a welcome challenge. The scavenger parties we send out of the Laird Compound every week could take these critters in a fight, no problem. Compared to the cactigers and flying komodos, a swarm of ferrets would be like a stomp in the park. Oh, better days...

Oh well. Now, I curse each and every one of you for destroying the future. However, I can't blame all of you for this monstrosity. With Furry Vengeance, I just hope Brendan Fraser and those black-hearted bastards at Summit Entertainment are ashamed of what they did. Because I certainly am. I'm ashamed of myself for watching this mess and I'm ashamed of the past for letting it happen. But you, dear reader? I don't blame you, I just pity you.

MINORITY REPORT: The lesson to take from all of this is that mediocre Brendan Fraser vehicles do have a long-term impact on society of which even the people who made them (including Brendan Fraser) are unaware. It's not Laird I feel sorry for, it's the people who died in the apocalypse who had just downloaded Furry Vengeance from Netflix and were ready to "switch their brain off and enjoy." Little did they know that the mental preparation they had undergone to force themselves to enjoy this fluff would constitute their final thoughts. If that's not a frightening concept, I don't know what is. -Ian "Professor Clumsy" Maddison