The following editorial originally ran in Granma - Cuba's communist state-run newspaper - on February 19th of 2008. It has been translated from its original language (Elvish) to galactic standard english.

AN IMPORTANT ANNOUNCEMENT FROM YOUR BELOVED LEADER 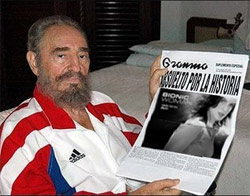 I have contributed many articles to this newspaper over the years, ruminating on the important issues that affect our great country with such hard-hitting pieces as Bread Is Better When It Is Warm, Anyone Seen The New Bionic Woman?, and Tracksuits: Sure Wish I Had Found Out About Them Sooner. The announcement that I am about to make might just top all of them.

After 49 years in power, I have decided to resign as Cuba's Presidential Dictator. I feel it is time to step aside and pass the torch to a newer generation that is represented by the man who will replace me, my 76-year-old brother Raul. He's got some really fascinating ideas on suppressing human rights, and the new military uniforms he designed up are going to cause quite a stir amongst the old-timers.

I do not take this decision lightly. I have always cared deeply about this country and all the power that I hold over it. If I simply owned a house and not a country, I'd only be able to boss around my wife and a few children at most. Maybe a dog or two. But the entire island of Cuba? That's a lot of bossin'. I'll miss that.

Regrets? There are a few. In particular, one question that has been asked of me many times - and my response - comes to mind. 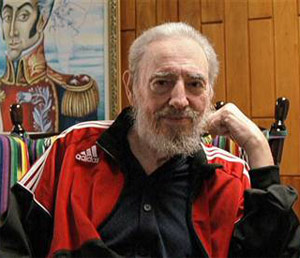 "Fidel," young idealists have asked me throughout the last fifty years, "if the belief that no man should be wealthier or more powerful than another lies at the very heart of communism, why do all communist societies give one dictator control over the common man? Shouldn't a purely democratic process be in place to grant all Cubans an equal voice in deciding each and every action that our government takes?"

Without fail I would reply by having the person who posed the question beaten, then thrown in a jail for the rest of his or her natural life. As my ability to leave the presidential palace has been restricted by recent illnesses, I have been doing quite a bit of soul searching and now I regret the way I responded.

If I had it to do all over again, I would instead place anyone who asked such a question at the top of a very deep well with their hands tied behind their back. Before them would be their dearest family members and several starved dogs. I would have those dogs attack the defenseless family and calmly explain that the mauling will only stop when the troublemaker voluntarily leaps into the well.

Also, I would have liked to have found a buried treasure containing a magic wish-granting lamp or perhaps an ancient laser gun from Atlantis that can still shoot lasers.

But enough with the past, it is time to address Cuba's future. I know what you are thinking. Without me at the helm, can this country survive?

While it is true that I will no longer be overseeing the daily responsibilities of our government - which mostly involves scheduling photo ops at the request of Jimmy Carter - I will not allow this great nation to turn into some third world island with nothing substantive going for it. In fact, I hope to have more influence than ever before by turning this weekly article into a daily column.

Here are the first few weeks worth of ideas that I've stockpiled; just a small taste of this bold new future we are about to embark upon together.