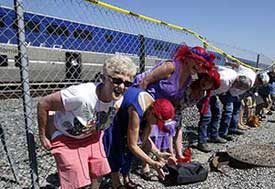 What most people think of our national railroad passenger carrier.I had a job interview in Los Angeles the other day so I decided to take the Pacific Surfliner train from Anaheim to Union Station because I would rather do some ridiculously exaggerated and painful act that I really wouldn't do like say, shove red hot AIDS infested needles into my eyes, than drive into Downtown LA. I mean, I would really rather drive into Downtown LA than shove needles in my eyes especially if there is AIDS on them, but it's a good cliche used to convey how unpleasant it is to drive in a lot of traffic and it reminds me of those Cranky Steve reviews I used to like so much.

Anyway, the ride was smooth and I arrived to my interview just in time to be told that the position I was applying for had been eliminated due to budget cuts. Damn you, recession!

While the train ride was enjoyable there was one thing I noticed during the whole experience that I did not like one bit, that is, the appalling amount of terrorists on board.

Luckily for you, the non-mass transit riding American public, Amtrak is instituting new security initiatives that will put these terrorists in their place, making train hijackings a thing of the past.

Officers with automatic weapons and bomb-sniffing dogs patrolling platforms and trains also are part of the plan.

The latest measures are not in response to any new or particular threat, Amtrak said.

Though some of you must be thinking "Uh, Amtrak? They're still around?", the vast majority of peace and freedom loving patriots of these United States of America applaud the new initiatives. Privacy and rail advocates, however, are fuming.

Privacy advocates call the initiatives invasive and wasteful. Amtrak is defending against a threat that just isn't there. Rail advocates say that the new measures will drive away passengers that fear longer delays and higher ticket prices. I guess neither of these groups heard of a little thing called "Never forget". 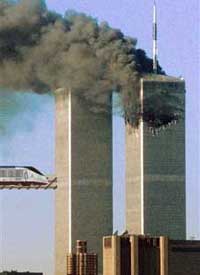 The Acela Express slams into the North Tower as seen in this gripping photo from the day that changed everything.Retired bus driver Brian Dennehy was enjoying a morning stroll with with his wife in New York City when he noticed something unusual.

"I was walking with my wife when I saw one of those new fangled Acela Express trains headed towards the World Trade Center" recalls Dennehy, "When I realized that there wasn't a train station on the 94th floor of the North Tower I knew something was wrong."

The Acela Express, originally bound for Washington D.C., hit the North Tower of the World Trade Center at approximately 8:46 AM. It had been hijacked by al-Qaeda terrorists. "We seeked shelter in a nearby deli. People were talking about engineer error and whether it was an accident or not. Then someone ran in and screamed, 'A second train just hit the South Tower!', and I knew it wasn't no accident."

A second hijacked train, this time a Regional bound for Boston, hit the South Tower at approximately 9:02 AM. Two more trains would be hijacked on that fateful day. A Vermonter headed for, uhm, Vermont, would be crashed into the Pentagon. A Keystone Service train crashed in rural Pennsylvania, apparently derailed intentionally to fend off an attack by passengers looking to regain control of the locomotive. It's ultimate destination is thought to have been the White House or the Capitol Building.

Seven years later Amtrak is finally increasing security on its trains so such a tragic event never happens again. Besides, if you're not a terrorist, what do you have to hide, eh? Eh?!