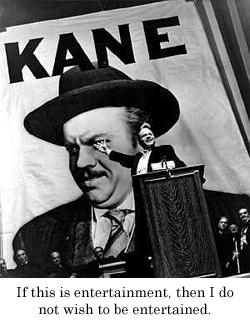 "A boiled carrot with a twist of ginger root, if you please." I threw a dime in the face of an oily young man who would not awake from his stupor. When he informed me they didn't have my item of choice, I thought to my boyhood visits to the circus, and remembered the culinary delights of the 19th century. "One brick of unsweetened black licorice, and some castor oil to aid in passing it, if you please." Once again, a gaze of utter confusion and improper breeding. He set a bag of what he called "popped corn" in front of me, and in my rage I could only snatch it and walk away in a fit righteous indignation. It tasted of bathroom floors.

Moving into the theater, I placed my cape and top hat over the adjacent chairs to prevent any pickpockets or Johnny-come-stablys that are known to strike in the dark. I sat in utter trepidation, when at last the screen lit up with what I assumed would be the feature presentation. Apparently, the theater saw fit to first show the audience the infantile antics of what I assumed was supposed to be a crude representation of a rabbit. I could go on about the inaccuracies of this short film, yet the space I have here only permits me to inform the Jews of Hollywood that rabbits cannot talk under any circumstances. And while I certainly enjoyed the pain that rabbit fellow inflicted on that Indian scoundrel, the very premise of this debacle was so preposterous that I can only convey my outrage accurately in Latin. This will be made available as a supplement to a future issue. 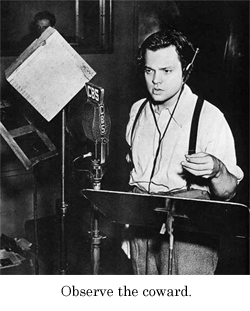 So what of Citizen Kane? Allow me the pleasure of informing you, dear reader, of this rather staid morality tale, clumsily written and acted by the reprobate known as Orson Welles. In what can only be an attempt to call attention to his homosexual lifestyle, Welles slanders both the newspaper business and the gentlemanly protagonist Charles Foster Kane through this "moving's" two hours of screaming pornography. The common street folk around me were eating up every spoonful of Welles' deception, as this pablum was deliberately designed to appeal to the simple minds who will never know the pleasures of extreme wealth and seclusion. I happen to be a living example: in researching my 15-volume edition on miniature shipbuilding, I did not speak to another human for nearly five years and consider myself lucky for this opportunity. Through the fevered mind of Welles, however, this would be seen as a sort of madness.

I must admit, some of the visual trickery of Welles had me rather impressed. At will, he and his co-stars would shrink and grow upwards of 20 feet, and the set dressings were certainly more elaborate than anything I have ever witnessed since that young upstart George Bernard Shaw took to the stage. Unfortunately, Welles' spectacle seems to have given him quite the swelled head, as he refused to even make eye contact with me as I repeatedly yelled, "You fat oaf!" during the interminable length of Citizen Kane. At the picture's end, when I realized the uncouth bastard neglected the standard curtain call, I rushed to the screen, demanding that Welles come out and explain himself. Just as my voice began to tremble thanks to that pesky tuberculosis, the interior of the theater lit up and the poverty-stricken crowd rushed back home to their squalor--obviously, Welles took this opportunity to escape from the rear entry of the motion picture house, and my wrath.

This was perhaps the best career decision he will ever make.

Addison Hillsdale IV is the Head Editor of Arts and Culture at Gentlemen's News Service and the author of Cribbage: A History and The Zoetrope: Poisoner of the Adolescent Mind. In October 1941 he will celebrate his 42nd distinguished year as a staff member.