Is Faerun Ready for Its First Orc President?

Goodbye creepy Cthulhu rape monster, you will be missed.Hey guys, what’s up? It’s spring, and that usually puts me in a pretty good mood, but I’ve been feeling a little down in the dumps lately. My mom got a puggle and it chewed up a bunch of my old D&D books, including my Cthulhu edition copy of Deities and Demigods. I got super mad and I yelled and stomped around looking for the dog. I don’t know what I was going to do. Then I realized I was letting my hatred control me and I managed to calm down. My mom still owes me for that book though. It’s like 200 bucks on ebay.

Add to that the fact that D&D 4th Edition is getting ready to come out and I still haven’t picked up even close to all of the sourcebooks. It seems sort of defeating. I mean I look at my Amazon wish list and I see the Complete Scoundrel and, I mean, I heard it was an awesome book, but what’s the point? I could buy it, but then if I wanted to use it I would have to manually convert everything to 4E when that comes out.

Besides, Keith is so busy lately I never get to talk to him. Jamie wants me to run an Eberron campaign without Keith, but I just can’t imagine doing that. The only campaign I have ever played without Keith was the Greyhawk campaign I started while I was at asthma camp in 7th grade.

That one was okay for a couple days, but then our cabin counselor found out about it and took all my books and dice and I had to talk to Dr. Oesterman, the guy who runs the camp, and he told me that Dungeons and Dragons was similar to sorcery. Looking back now I realize D&D is nothing like sorcery, not even close, but at the time I didn’t have any wise comebacks. What really sucked was Dr. Oesterman wasn’t even there the last day of camp, so when my mom picked me up I couldn’t even get my Greyhawk box back from him. No big deal now, but man, that was like 25 bucks, which is a small fortune for a 7th grader. 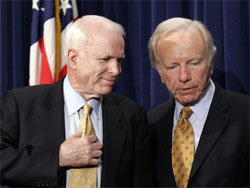 Here is that maverick guy with the dad from ALF. I don't really know why he is there too, but I'm glad he cleaned up after smoking crack with gay dudes. Anyway, since I have been in sort of a doldrums with my roleplaying group and I’ve been bummed out I have been watching a lot of TV. Everything on TV here in America lately is all about the election. I’m not big into politics, but I guess you would describe me as an independent. I sort of like some things about every side and I just totally see where everybody is coming from. I like the way the Democrats want us to leave Iraq and I like how they treat minorities and gay people, but I also see the Republican point about having guns and not having abortions.

Also I don’t like taxes, but I guess it’s sort of confusing who is against taxes anymore. It seems like the Democrats want to get a bunch of money with taxes and then balance the budget, but the Republicans want to spend a ton of money and lower taxes. So the Democrats are like a savings account that you can’t spend until college and the Republicans are like a big no limit credit card. One of them is no fun at all and the other one is sweet, but will have big time consequences when you go to buy a house.

Like I said, I don’t really know about the issues, but as someone who doesn’t really follow politics much imagine how surprised I was to see a black dude and a white woman running for president against each other. I think the black dude is the Democrat and the white woman is the Republican and then there is this old white guy who looks familiar who is an independent or the Maverick Party or something. He seems like an okay dude, he comes from Vietnam and he has this sort of hot wife that looks like the ladies who are always posing next to award-winning pies on the front page of the newspaper during the county fair. Normally I would think he seemed like an alright guy, but man, you hardly hear about him with all this talk about the black dude and the white lady. 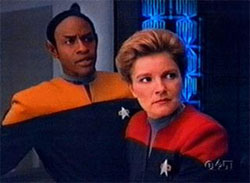 First black Vulcan and first woman Captain, two major firsts. “This is a historic election” is what they keep saying on TV, but then they always ask, “Is America ready for its first black president?” I don’t know, I think America probably is. I like a lot of black people. Mr. T is one of my heroes and I like Judge Mathis because he keeps it real and tells it like it is. The real groundbreaker was Tuvok from Star Trek Voyager. If America is ready for a black Vulcan then America is ready for a black President.

The point of me bringing up the election is that it got me thinking about orcs. As you probably know, I wrote my senior year reading class paper on racism in Faerun, the main continent in the Forgotten Realms setting of Dungeons & Dragons. At the time it was a pretty big deal that half-orcs had just been made a playable race. Up until that point there were only orcs and you could never play an orc, they were just monsters. Even though they had their own language and culture you could find “orc ambush” or “orc scouts” on a dungeon random encounter chart right next to an Ochre Jelly or a Quasit.