Tuesday, Aug 06, 2002 by Scott "Kung Fucious" Delbango (@TwitterHasBannedAllMyAccountsEver)
Most of you are probably familiar with Konami's Dance Dance Revolution. Known for its fun, fast paced action, the game quickly became one of the most popular games in arcades across the globe. Who knows what the real appeal is? It could be the songs, or the dancing, or even the opportunity to make a fool out of yourself in front of a crowd of attractive girls. Whatever the reason, all sorts of people play. In order to become a true master of the Dance Dance arts, you have to know your opponents better than they know you. There are many varieties of Dance Dance players, each with their own strengths and weaknesses. Weeks of lurking around my local arcade has led to my current status as a registered sex offender. It has also led me to create the following list of the ten most prevalent types of opponents you will encounter while Dance Dancing the night into day. Learning the nuances of each opponent will help you become king of your local arcade, and will help dull the pain of your lonely, single existence!

Average white guy alpha is just your plain old ordinary joe. Aged 14 to 35, average white guy alpha has no experience with Dance Dance Revolution, actual dancing, or coordination in general. He will lurk in a crowd surrounding the Dance Dance machine, and hop on when people start losing interest to avoid embarrassment. He will be completely overwhelmed by even the simplest stage, tripping over his own feet and often hitting his opponent accidently with flailing, uncoordinated limbs. Despite this, he is a persistent fellow, and will play until he runs out of money which was meant to be used for his lunch or insulin. Chances are that most people reading this are potential Average White Guy Alphas. Defeat him by simply avoiding playing like a retard. 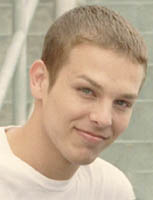 Having a similar background to Average White Guy Alpha, Average White Guy Beta has several weeks of Dance Dance Revolution experience under his belt. While not incredible, Average White Guy Beta can actually complete some dances, as opposed to his bumbling counterpart. Like Alpha, Beta has an incredible sense of determination, and will being to take on opponents far more skilled than he is. However, due to Average White Guy genetics, his skill can never increase, only plateau. This will not discourage Average White Guy beta, as he insists that he will get better some day. On a side note, look for him at clubs and bars trying to dance using Dance Dance maneuvers. Also, look for him to have no success with this. To overcome this adversary, you must psych him out. Point to a girl, and tell him that she was impressed by his dancing. Ideally, this should be a girl you don't know and would never want to talk to. He will eventually confront her about this and get crushed, leading you to an easy victory. Bonus point: Girl will get eternally creeped out.

The Cutesy Girly Girl never discovers Dance Dance herself. Rather, she is either related to, or the girlfriend of Average White Guy Alpha or Beta. Taking to the game like she took to Barbies, The Cutesy Girly Girl will do everything in the most feminine way she possibly can. She will also memorize all song lyrics instantly and sing them as she dances, living out her Brittany Spears fantasies on the pad. While she has roughly a fifty percent chance of being attractive, she has a one hundred percent chance of being irritating and deserving of blows. The only way to put a handle on this situation is to destroy her confidence by dropping subtle hints about her weight problem. Whether she has one or not. This will cause her to dance so hard in a vain attempt to burn calories that she will pass out and her heart will explode, destroying one city block.