fable - fa·ble (noun)
1. a short story, typically incorporating fantastical elements, which serves to convey a moral
2. revolutionary RPG that changed the genre forever; allowed you to alter the course of history by stepping on a single blade of grass or making love to a rose bush, let you plant an acorn strategically so that thirty years later it would spring up right where someone you were fighting against was standing and skewer him

The Ant And The Grasshopper 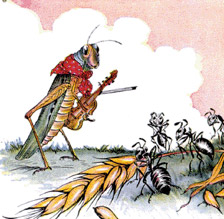 In a large and grassy field one fine summer's day a grasshopper frolicked in the sun, hopping about with glee and chirping his favorite songs. It seemed the peak of selfishness to keep a beautiful day such as this all to himself, so the grasshopper visited the home of his friend the ant.

"Don't you realize what you're missing?" asked the grasshopper. "While you sit inside all day, life at its most precious and spectacular is passing you by!"

The ant wearily regarded his longtime friend with bloodshot eyes.

"I'm glad you're having fun, but I cannot join you for there is work to be done. My dwarven hunter in World of Warcraft is only level 12! I need to be level 60 come winter, and if you were wise you'd come in from your silly playtime and do the same."

But the grasshopper waved his hand dismissively.

"The little time we are given in life is best spent experiencing joy firsthand out there in the real world, not toiling away in a polygonal mine or hacking through carbon copies of the same spider all day and night. I shall be in the field to the south should you come to your senses and decide to join me, singing my song as loudly as my little grasshopper lungs allow."

And so he did. For several months the grasshopper went on adventures, plucked fresh fruit from trees, took naps in the sun, and drank wine until he giggled uncontrollably and beat his girlfriend. It was the greatest summer ever. The ant, on the other hand, rarely left his home. When he wasn't working on his character's progress he was researching the best way to make dwarven belts and advertise them in the game's auction houses.

Winter arrived as it always does, and one night during a bitter snowstorm there was a knock at the ant's door.

"Yes? Who's out there?" asked the ant, halfway listening for distress calls from his guildmates in the other room. They were on a very large raid that had been weeks in the making.

"It's me..." answered a weak voice, "the grasshopper. Please. You must help." He sounded frail, void of the life he had been bursting at the seams with in the summer.

"It's my night elf rogue... he's not even out of the newbie training grounds yet. Oh God you have to help me!"

"This summer you had all the time in the world, and instead of working you sang as loud as your little lungs would allow." The ant paused for a moment to let this sink in. "I suggest you take up the violin, and spend the rest of this winter playing a sad song for yourself."

With that, the ant turned the lock on his front door and returned to the raid. The grasshopper never did learn the violin. His night elf all but useless, the grasshopper's body shut itself down and he died alone and friendless in a remote snowbank.

The Fox And The Sour Patch Kids 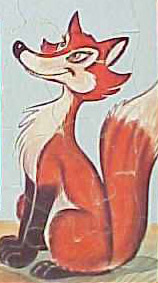 One day a wolf happened upon a convenience store, his stomach folding in on itself and torturing him with relentless pangs of hunger. He was overjoyed to come across a candy shelf displaying Sour Patch Kids (his favorite treat), but that joy soon turned to dread. The last box of candy was on the top shelf, at the very back. He might have been able to reach it if he had simply stood on his tiptoes and reached a little, but risking a strained muscle or the unseemly sweat associated with physical exertion was unacceptable. The fox called out for the help of the cashier, who was simultaneously trying to take care of seventeen customers, report the license plate number of a guy who had just driven off without paying for gas, and get robbed at gunpoint.

The fox's voice was filled with enough panic to lure the clerk away from his duties without hesitation, and when the fox explained that he needed a box of candy located at eye level the clerk rolled his eyes.

He handed the Sour Patch Kids to the fox, who wagged his tail happily as he tore into the tasty snack. Mmm, sour! The following day the clerk was slapped with a lawsuit for harassing the fox and inflicting emotional damages totaling seven thousand dollars.

Moral: Never do anything that might make you sweat, but if you do sweat make sure you're wearing one of those antiperspirants named Axe or Tag or Bif. Chicks will go fucking nuts and rape you in public, it's great.

In the magical land of Hoboken there lived a girl named Tiffany. She had always been moderately pretty but when given the forgiving eye of a low-resolution webcam, a poorly lit room, and a repertoire of poses ranging from "my head is at a slight angle as I slyly look off to the side" to "I'm trying really hard to show you how indifferent I am", she transformed into a beautiful jpeg princess. Her non-nude paysite was popular with desperate men who somehow managed to procure credit cards against all odds, and thus she found that she had enough attention from creepy strangers to make her happy.

For a few months, at least.

One morning Tiffany awoke from a troubled sleep and bolted upright, pressing her clenched fists against her chest and furrowing her brow. A troubling new feeling had overwhelmed her: discontent. It was a pivotal moment (which you can still watch if you pay an extra $10 to access her cam archives), and suddenly putting on a push-up bra and squeezing into a tight shirt so thousands of men could focus their attention on her cleavage wasn't as fulfilling as you'd imagine it would be. She needed more in life. More attention.

The call went out on her website that day. Woe! Tragedy! This poor girl's grandmother was dying! Letters of support were all that could possibly get Tiffany through this, and also donations to her Paypal account.

The letters poured in, their senders unaware that Tiffany actually hated her grandmother who was unfortunately alive and well in the kingdom of Boca Raton. Some expressed their deep and honest concerns, some hoped that the money they donated would show how generous they were and that Tiffany would fall in love with them, some asked for pictures of her feet in return for their donations, and one asked for x-rays of her feet or at least a drawing of what her feet would look like if x-rayed.

This pleased Tiffany greatly, but the feeling wore off soon enough.

One week later the call went out again. Disaster! Calamity! Now Tiffany herself was struck with an unnamed illness, and without the healing comfort of the items on her Amazon wish list she could very well die.

Two days later the call went out once more. Oh the humanity! The used Porsche (yuck!) her father had bought her broke down, and without a way to get to the grocery store Tiffany would almost certainly die of starvation. If she didn't come up with several thousand dollars for the down payment on a new BMW the poor girl might never be heard from again.

This time around, things were different. She had never responded to the multitudes of letters she had received in the past, and many people began to doubt whether the perils Tiffany described were real. These people now refused write a single letter or send a single dollar. Little did they know, her car had actually broken down and she really did want a BMW.

Luckily, there was an endless supply of desperate weirdos with credit cards to make up for the ones who had stopped buying her things. Tiffany had a brand new BMW in a week's time, so she took a snapshot of her belly button and the top of her panties to fully repay her members.

Moral: I'd totally do sex with Lindsey Marshal.

Click here right this very second for my exclusive interview with Huey Lewis' ghost, or continue reading this sentence to learn the shocking truth that I am a compulsive liar.