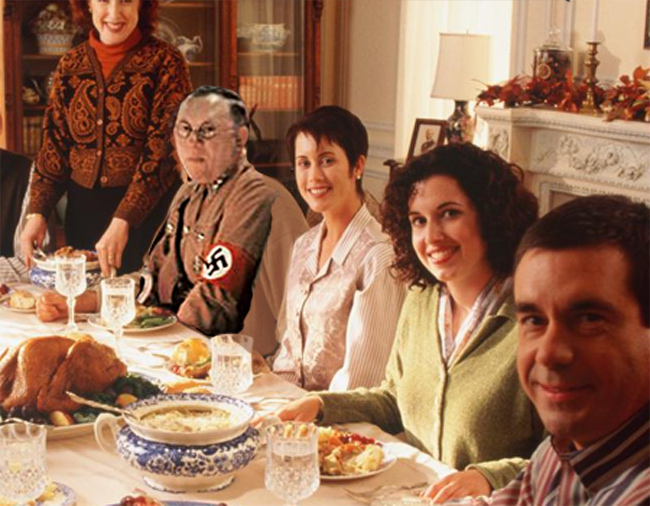 In my house, when the holidays come, my large family and a few friends gather around the table. We have three generations, including 60-year-olds, some 40-year-olds, millennials, and even great grandma who is 94 and was a nurse during World War 2 in England. Only one of us is a literal Nazi. This is, after all, a family that includes two Jews and a Mexican-American.

But for some reason it took only one literal Nazi, dressed in a Storm Buds uniform with a swastika and a frog pin, to turn a genial dinner into a contest of wills. It didn't matter that the holidays called for love and gratitude. It didn't matter that it was supposed to be about giving thanks for what we have and not being triggered about everything like a bunch of snowflakes. The feelings the literal swastika armband aroused were too stormy. People are still all wrapped up in ancient history.

Last year when I gave my ten minute long speech about the Lügenpresse and linked ISIS to Mexican immigration and Bernie Sanders, my uncle did not threaten to "kick me in the head until the racist shit I call a brain falls out of my ears." People were still too stunned by the election, still too mad about stuff like the pussy grabbing video to really react when I explained that different races have different skull shapes.

I had hoped this year the Harvey Weinstein/Al Franken scandal might have humbled some of these people in my family, but for some reason they flipped out when I explained to them that the Jew is a perverse cancer that corrupts society and the only way to save our Western Civilization is to cut this cancer out. My own father tore off my armband and shoved me into the guest room. They put on Christmas music really loud so they couldn't hear me yelling and barricaded the door with a dresser. Where was my free speech?

When my mother finally took pity on me, I was allowed back at the table only if I promised to "cut out that Nazi shit." So much for the tolerant left. I mean, most of my family is actually Republican, but they are to the left of me, so I lump them in too. Everything ran smoothly until I said, "Didn't you love Trump's speech on Charlottesville? Isn't it great to have a leader willing to stand up for our heritage?"

That did it. The communal spell was broken. I'd ruined Thanksgiving. "Fuck that speech," said my aunt, even though the only thing "fucked" about speech was their need to suppress mine. "Our whole family fought for the Union!" snarled my hateful grandfather.

"I'm exercising my right under the Constitution," I shouted, doing my hail victory salute. When that only seemed to anger them more for some reason, I began to quote various memes to try to connect with them on the level of humor. I tried to describe the "Greedy Jew" version of the Pepe character but I was already being shoved into the street outside my house. As the whole family, young and old, even the kids, began to throw mashed potatoes and cups of piss at me, I knew what it felt like to be a victim of racist hate crime.

I finally saw who the real Nazis were. I mean that in the pejorative sense. I am a real Nazi, but when people say "Nazi" they incorrectly mean it as a bad thing, so that's how I'm using it here; to describe someone intolerant and violent towards minorities. After all, there were two Jewish people at the table and only one literal Nazi so I was clearly the minority.

To my fellow literal Nazis, a word of advice: The Jewish media and communists control all the media your family is consuming on a daily basis. Until Sinclair can buy up every TV channel, our message of truth just doesn't stand a chance of wide acceptance. Should we take off the armbands and the Storm Buds uniform we bought off Natsy, the Nazi Etsy? No. We should buy extra meme buttons to wear on our shirts.