This Update Is Exclusively for Cool People

Loosens tie. Flexes entire body far more than the simple act calls for, straining to display every part of my physique that might be considered a muscle.

Puts on a plain knit beanie. Slowly turns the beanie around until it's backwards.

We have good times together, don't we? Joshing around online. Guffawing and enjoying a relaxing time on the internet.

Turns a chair backwards. Slouches on it, chin resting on the backrest and arms dangling to the sides for maximum coolness.

Well today I'd like to put all the joshing on hold. It's time to get a little serious. Time to get real.

Removes prescription glasses. Puts on a pair of shades with "ESPORTS" imprinted across the lenses in big, bold letters.

You're not in trouble or anything. Hah. I'm not a narc. Don't worry, it's not like that at all.

Without seeming to leave, re-enters the room on a Segway. Leans sideways against the handlebars, arms casually crossed. One sleeve is rolled up to reveal a temporary tattoo of Fred Durst streaming himself playing Call of Duty on Twitch. 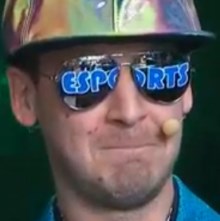 Keep in mind that this is a totally judgment-free zone. The carefully slanted sign on the door says so. You know, the one with a suction cup dart stuck on it. The one beneath the yellow NO PARENTS ALLOWED crime scene tape, next to the poster of Chester Cheetah.

Nonchalantly does a complex and lengthy pantomime of drumming with two rolled up sheets of paper as the drumsticks. Drops both sheets of paper at exactly the same time by accident. They roll open, revealing themselves to be official documents signed by Tony Hawk and Zach Braff stating that I'm "100% Gnarly".

So, like, no pressure or anything. We're all cool here.

Climbs into miniature helicopter the size of a go-kart. Carefully follows a pre-flight checklist and requests FAA clearance before taking off. Hovers at ceiling level, deploys a banner beneath the helicopter reading "Memes".

I feel like we've bonded through online humor. This bond is stronger than any I have cultivated at a comic book shop - or even a comic book convention. I trust you implicitly. This is why I feel comfortable coming to you with this today.

Holds an iPod, iPad Retina, iPad Mini, and iPhone, each playing a different rap song. Wears an enormous pair of Beats By Dre headphones, which are not plugged in to anything.

It's really no big deal. Just answer one question for me. Dude, please. That's all I ask. Then we can get back to our usual chillin' and chucklin'. So here comes the question:

Converts every frame of the entire run of Game of Thrones to gifs and uploads them, giving each a title that vaguely relates to everyday life.

Which version of Mavis Beacon are all of us cool people using nowadays? I'm still running the 2006 edition.