Women Are Not Capable of Understanding Robocop 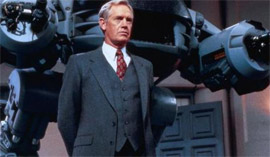 The first time I saw "Robocop" was in my dreams. My cyborg cop dreams, where the streets were so mean they needed a cop who was more than human. Paul Verhoven finally made my dreams into a movie and when the credits rolled I was in a daze. I turned to my hot babe girlfriend and said, "What'd you think?"

"No, no you didn't," I pointed out. "The movie is called 'Robocop' not 'Ladycop.' One of those things is ridiculous and here's a hint about which one: it's a girl. Now duck down with me between the seats. I want to watch it again."

"You're not paying me enough for this," she said and stormed out, her lack of understanding as ridiculous as the pantyhose she was wearing with her short-shorts. It was as I walked out of that theater several hours later that I realized why my date for the night had so rudely departed: women are incapable of understanding "Robocop." It's not a regular cop film like "Dirty Harry" or a war movie like "Dirty Dozen" or even a comedy like "Dirty Rotten Scoundrels." "Robocop" is a male fantasy - "Entourage" with OCP instead of the Murphy Group and Alex Murphy instead of Vincent Chase. The Rat Pack where Sinatra counts down from 20 before blasting machine guns into Joey Bishop's cousin. 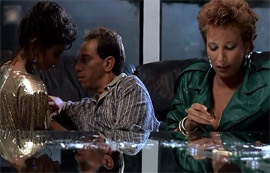 "Robocop" takes place in a world guys dream about. Way down deep in the cyborg cop brain, Alex Murphy is exactly what guys want to be: unstoppable, covered with metal, capable of emotionless killing or funny one-liners, eating baby food, and devoted above all to their brothers - the Detroit Police Department. Women sense that they are irrelevant to this fantasy, and it bothers them.

Robocop doesn't have to work. He just is Robocop. He sits in his chair dreaming about his wife and kid that he can only barely remember. Then he wakes up and shoots the balls off bad guys. He spends his days and nights doing what guys love above all else: beating and shooting criminals, preferably in their balls.

Ball-shooting means carefully targeting through the kicking legs of a rape victim, through walls using heat vision, or directly blasting lead into a dick and testicles. Women are allowed to watch this happen and that is all because women do not have balls to shoot and they will not shoot balls because they lack targeting computers. Even tough women cops want to arrest criminals. In the male fantasy all of this is unforgivable - no time for thinking, we just have time to target and engage dangles. Use the thermal imaging, annihilate a goobag. 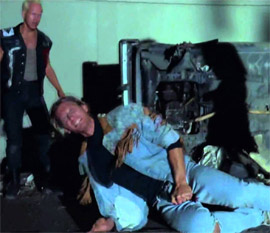 To a woman, Robocop is not even human. To guys, he's more than human, he's a cop. Even when his rules are literally programmed into his head, he manages to play by his own rules. He offers a solution - ball destruction - and offers bad guys the chance to cooperate. As he puts it, "Your move, creep." The fact that giant vats of toxic waste are involved - that, at any moment, anyone could have their nest of pants eggs destroyed - just makes the stakes higher, the fantasy more exciting.

When the "Sex and the City" girls sit around drinking appletinis, they're a tightly knit clique - but their rule is to always be sympathetic and supportive of each other.

As "Robocop" shows us, guys hanging out together don't really like to talk about the women in their lives because those women are hookers with coke-powdered tits, kissy scientist ladies with giant glasses, or fading memories of a life that cannot be recovered. What men, and Robocops, would much rather do than discuss problems and "be supportive" is to use the crime database to find Clarence Boddicker and ruthlessly execute his balls.

The rule is, be a man, also be a machine, and a cop, and exterminate testicles.

Dick Jones breaks ball-blasting etiquette in two ways. One, he's not really down with Robocop, he wants actual robot cops, and two, he uses Robocop's programming to stop Robocop from delivering ruinous volleys onto OCP jam-sacks. To kill the balls, Dick must be fired. 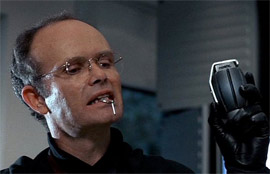 Even Officer Lewis's relationship with, and eventual partnership to, Robocop is based on ball-blasting. She was there when Alex J. Murphy, regular cop, had his bollocks and other body parts ruthlessly wrecked by Clarence Boddicker and his gang. She is Robocop's one link to his pre-ball-wrecked life and a prime motivator for his ball vengeance. In a sense, she is a guy, although she doesn't realize it, even managing to figuratively shoot the balls of Robocop's heart.

What would "Robocop" be like if it were told by a woman?

Meet fully empowered policewoman Ann Lewis. Ambushed by a vicious gang of men, she is seriously wounded and can only watch as her rookie partner, Alex J. Murphy, is gunned down. She mourns the loss of her partner, only to learn that he has been revived and turned from a human cop into a cyborg cop. The patriarchal corporation responsible for creating this so-called "Robocop" refuses to allow Officer Lewis to be around her former partner. But she has other ideas and awakens Robocop's latent humanity, helping him work through his past trauma and seek justice for his murder. She puts her life on the line to help him bring down the criminal gang that killed Alex J. Murphy without shooting anyone in the balls.

And who would want to watch that movie?

Robocop tries to sit through five minutes of Orange is the New Black.