Devil Went Down to Georgia: A Court Case 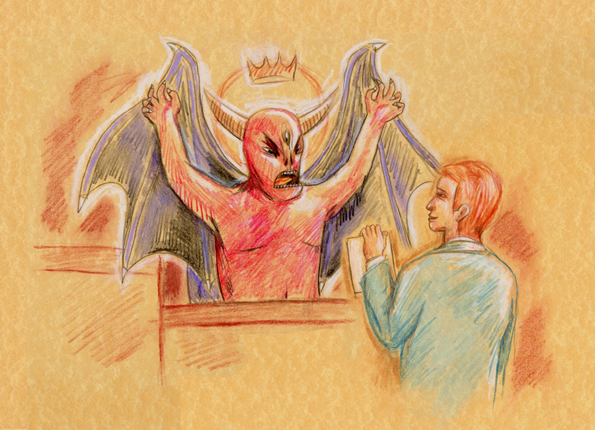 PROSECUTOR HORNING: Thank you, your honor. Let's just go ahead and go through the terms of this contract, titled Form HC656-2: Contest for Possession of Souls and/or Impractical Items. First and foremost, let's discuss exactly who this contract concerns. It says here, and I quote, " ... and on this day, August 28th of the year 1978, a contest shall be held between Johnathon Frent, herein referred to as The Challenger, and The Dark Lord Satan, herein referred to as The Champion."

That's a pretty interesting title you hold there, Satan. You're the champion? Champion of what, I wonder? Were you claiming to be The Champion of the Fiddle?

SATAN: Yes, that's correct. Just one year prior I entered a fiddle contest in your wretched human state of Texas. The competition was lackluster at best. After three rounds of furious fiddling I walked away with the trophy and the title - Fiddle Champion of the World.

PROSECUTOR HORNING: Now you'd be referring to the Kings of the Fiddle tournament held in El Paso, am I correct? Held every year on the 3rd Saturday of August? This particular contest occurring on August 20th of 1977?

PROSECUTOR HORNING: Hmmm. You see Satan, that just doesn't jibe with me. We did a little research and found that Perry Beckman from Nashville won the contest that year. As a matter of fact he came in first place at Kings of the Fiddle every year from 1974 to 1979. We're also aware that out of all of the times you competed at Kings of the Fiddle, the best you ever did was a fourth-place finish in 1980. Now I'm no fiddlin' expert, but I'm pretty sure that a fourth-place finish doesn't qualify you to hold the title of Champion. So how can you refer to yourself as such in a legally binding contract, and expect it to hold any water?

JUDGE BOFKIN: ORDER IN THE COURT! I SAID ORDER IN THE COURT, DEVIL! Now you may be Mr. Hotpants where you come from, but you're in a Georgia court room, boy! You act up one more time and I'll have you shackled and removed under contempt of court! Do you understand me, son?

SATAN: I do, you robed and filthy bitch of God.

SATAN: Nothing, your honor.