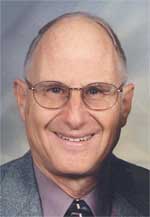 Hello folks! Yes, that's my ugly mug!Hi there folks and folkettes, you may not know me but my name is Dr. Draw and I am legally required by the State of Arizona to tell you that I am not a real doctor. Whew, now that I've got that out of the way I can get down to brass tacks! War is coming kiddos and there's no denying it, the writing is on the wall as big as an Italian party pie. As a professional cartoonist and comic artist it is my duty to go to war with the boys in uniform. No, I don't mean slog through the trenches with a carbine you sillies, I mean I have to make it my job to entertain the folks back home AND the boys fighting for freedom and democracy. This isn't the first time for me. I've seen a lot of wars, from the Great Patriotic War against Nazism and Japaneseism to the battle for Vietnam's freedom. Back during those times my comic was run in the Phoenix Star Ledger, but the these days my comic "Family Affair" has been pushed out by all the new-fangled kids with their "Dilbert" and "Kathy" and whatnot. It's really a sad state the funny pages are in, but that's a story for another time.

Mr. Kyanka has kindly given me the opportunity to use his web site to talk to you a little bit about what it is I do with Family Affair and my art in general. Since war is on that old horizon I can think of no better time to reminisce about some strips I did in support of WWII and show off some of my newer work that won't be seen in any paper under the sun. Unless you print it out, hahaha, please do! Show some friends at the office too, especially if you work at a newspaper publisher. Below each comic I have added some commentary on my work.

This was a little reminder for those people who like to gab about the war that the Nazis have ears everywhere and the spies might just turn things sour for our boys if they hear the wrong thing.

This number was mighty popular back in 44 but today some people might think it's a little bit offensive or so they say. Personally I think it's a hoot and a half, what with the little Japanese fellow in the cage and the soldier saying "we're all out of FLIED LICE" even though the guy was really asking for fried rice.

I think this just about says it all about the messed up situation that we got ourselves into. Dealing with the snake Iran we managed to get Lady Liberty all twisted up and for what? Snake oil and dates. There is hope though and I have represented it by the All American Robot which was from a comic book series I was going to do for DC but it fell through because of Harold Walkerstein.

There's a funny story behind this one. I was watching this show on the Discovery TV Channel with my roommate Gladys who is a very religious type of woman. It was about Saudi Arabia and it showed that women there have to wear head-to-toe black sheets. Gladys said they looked like wraiths and when I asked her what a wraith was she said a ghost so I though how funny it would be if an American soldier mistook a couple of ghosts for Arab women. I tell you what, I think it's funny and I think it belongs in the newspaper too! I am also really considering expanding this into a series where the ghosts go to a POW camp and get interrogated, oh it would be hilarious.

Sometimes I just have a doodle in my noodle that needs to get out and I decided to put it down on paper. One of my favorite characters that I have ever developed is a little fellow by the name of Mr. Turtle. He is part of my "Mister" series of characters that include Mr. Horse, Mr. Snake, Mr. Owl and many more. Last week I was sitting there in my breakfast nook eating a nice bowl of Ralston's cream of wheat with just a little drizzle of honey on top when a great idea for a drawing struck me. I remember my pet turtle Claudia had been sitting on a mossy rock just the other day and she was the cutest thing I had seen. I may be getting up there in years but my mind is still like a steel trap, so I had a clear image of little Claudia sunning herself on that mossy rock. I immediately flew into my studio/laundry room and put pencil to paper to create another patented Dr. Draw masterpiece!

I like to call it "Thoughtful Turtle" because he really looks like he may be considering some mischief. Just like Claudia, there he is with his head resting on that old mossy rock, feeling the warm rays of the sun beat down on his neck and heat up that battered old shell of his. I gave him a smile but I tried to make it playful because all of the Mister series of characters are happy AND playful.

In other news on the Dr. Draw front I have been hard at work using the magic of computer technology to create some amazing digital graphics. On my web site you can see that I have whimsically drawn on a photograph of myself, but the more I have been using Paint Shop Pro the more I have been experimenting with creating an image from scratch. 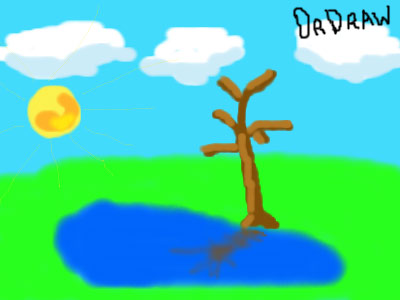 No, that's no photograph or oil painting you are looking at, that is a 100% computer generated world straight from the noodle of Dr. Draw to your screen! It is amazing what computers are capable of these days. I spent only an hour creating this image and it is ready to hang in a gallery. Even better, if there is something you don't like I could go back and add it in! Did you say you wanted to see a dinosaur in that picture?! Well, just watch! 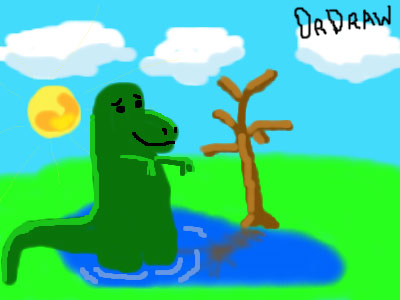 What do you know folks and folkettes, it's the happiest darned dinosaur on the planet right there in my own back yard! It's Mr. Dinosaur and he's taking a dip in my pond! I hope he doesn't scare away all the ducks! That sure was easy too, maybe I should change my name to Dr. Masterpiece!

It has been so much fun writing all of this for you fun people and I hope you got as much enjoyment out of reading it and looking at my art as I did making it all! I look forward to coming back again, my health and Mr. Kyanka allowing, and showing you some more of my work. In the mean time if you have any requests feel free to use an e-mail to me. I get them almost right after you send them. I like to pretend there are little electronic mail trucks zipping all over the phone lines carrying letters from me to you and you to me. Until next time, keep reaching for your goals and you may reach them one day!