When it comes to blasting out soulless Americana, no entity on this earth has a bigger and more industrious butthole than the Bradford Exchange. With each of these articles I write, I hope it will be the last. But the Bradford Exchange is relentless. They cannot help themselves. They are on some maddening quest to create the perfect item that so remarkably encapsulates the essence of America's schizophrenic spirit that reality itself collapses in on itself.

Perhaps someday one of those inexplicable corporate hotshots will take over and decide to rebrand the company as "The Brad" or "The Exchange" and replace their majestically terrible product line with something even more bizarre. Until that day comes we can count on the Bradford Exchange to continue its dreadful quest to unravel everything we hold dear and sacred in this universe.

I don't know why, but I feel strangely obligated to keep tabs on their ever-expanding and recursive catalog, and to make fun of it. I think in part because I'm trying to make sense out of what appears to be entirely senseless. Humans are coming up with these ideas in all sincerity, then selling them in earnest to other humans. This is really happening. These things are being conceived, manufactured and sold without an ounce of irony anywhere in the process. 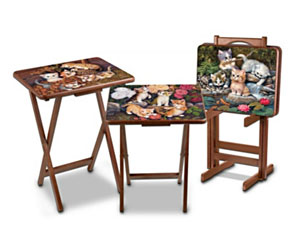 As far as the kitten art scene goes, there's Jurgen Scholz and then there's everybody else. As an artist, you can aspire to no greater glory than having your artwork adorn a tray table destined to hold stacks of old newspapers, TV dinners and giant plastic tubs of craft supplies that will never ever be used.

Now normally you would probably pay a very modest fee for a set of tray tables, but since these feature the unique and unmistakable art of Jurgen Scholz, the Larry Bird or Albert Einstein of painting kittens matching wits with balls of yarn, you're looking at a $200 investment. That's a pretty hefty chunk of the ol' social security check, but worth every penny since you obviously can't just buy a generic set for $50 and glue on some cat photos you pirated from the internet. 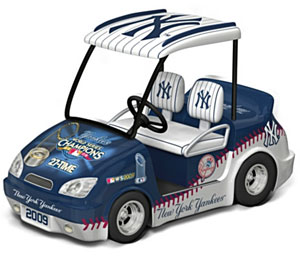 I love golf carts, but the problem is I'm a huge fan of 2009 World Series champions the New York Yankees. If only there was a collectible figurine that solved my delicate dilemma in a respectful manner. Wait, you mean to tell me that Bradford Exchange makes a realistic golf cart figurine commemorating the winners of the 2009 World Series? Sold! Now I have no other worldly dilemmas except for being a tremendously useless shell of a human being. 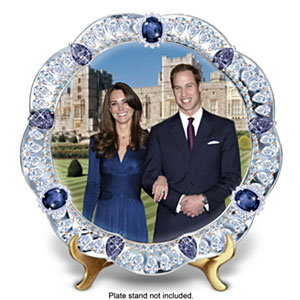 The world held its breath on November 16, 2010, as Charles, Prince of Wales, at last announced the engagement of his son Prince William to Catherine "Kate" Middleton of London, a commoner.

Indeed, I, like the rest of the world, could not help but be so captivated by the marriage of Prince William to that lowly wretch of a woman, that disgusting commoner with no titles to her name, that my respiratory system ceased to function and my blood stopped supplying oxygen to my brain. As I suffered brain damage on said occasion, I am extremely grateful to the Bradford Exchange for making this bejeweled dinner plate depicting an actual undoctored image of the asymmetrically classed couple. Now I can be reminded of the thing I don't remember.

What bothers me is the explicit warning on the certificate of authenticity stating this plate is not for food use. Excuse me, Bradford Exchange, but if I want to eat my hot dogs and instant potatoes -- a traditional English meal -- off of this beautiful Cinderella story in which a noble prince marries a no-good trash lady, you can't stop me. Don't even try. If I accidentally eat a simulated diamond in the process, then so be it. 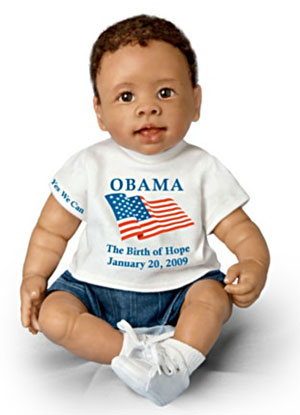 He may not be a real citizen. He may be the product of an unnatural love between a white lady and a globetrotting Muslim working the extremely long con of getting one of his sperm into the White House. He may be the Antichrist as prophesized in various misinterpretations of the Bible. He may be a socialist even though he pretty much does the opposite of what all socialists want. The only thing we know for sure about this mysterious Barack "Barack Hussein Obama" Obama is that he makes for one really cute baby, and babies are much easier to control and contain when they get out of hand.

No word yet on whether President Barack Obama Commemorative Baby Doll is anatomically correct, like some of the Bradford Exchange's other perfectly reasonable fake child offerings.