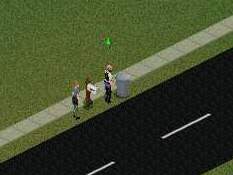 Maxis Software is known in the gaming industry as "The Sim Company", producing such memorable "simulation" games as Sim City, Sim Theme Park, Sim City 2000, Sim City 3000, Sim Marie-Kate and Ashley Olson, Sim Copter, Sim Golf, Sim Plumber, Sim Purgatory, Sim City 2471, Sim City March 12th 2471, Sim Safari, and the popular Sim Utah. Each title has become more and more complex, offering a greater variety of options and controls to rule your computerized simulation. Maxis recently released their newest title, "The Sims", which is promised to be the most complex and realistic game to date. But how does this simulation effectively stack up to reality? Can the "real world" be accurately represented inside a 19 inch monitor? I wanted to find out how realistic "The Sims" was and did so through the only way I could think of; by creating a family of "virtual Jerry Springer Show guests" and seeing how well they acted in a week of gameplay. The answers may astound and surprise you, especially if you're amused easily. 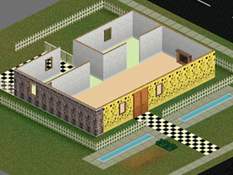 This house will raise the real estate of surrounding homes for sure.

Upon starting the game, I was presented with a variety of different land plots in a neighborhood I could build my house upon. I was originally going to buy the land next to the rich folk's mansion so I could throw my garbage over their bushes and ruin their property, but then I learned that I could simply bulldoze their house down and build on their land. I found this to be a more preferable option, as I didn't want any of those snooty rich folk looking down on my little family and puttin' on hairs. I knocked down their home and built what can only be described as "the best damned house I've ever built on my computer within the past six days".

I had to make many strategic and intelligent decisions when building the dream home for my family, the Felchers. After many long, hard hours of eating donut holes and watching reruns of "Divorce Court", I came up with a blueprint that I thought would ensure the Felchers to live in luxury and comfort for their entire lives or 30,000 miles, whichever comes first. As you can see from the picture, one of the first things I tried to do was create a moat around the house to protect my family from evil trolls and invading Christian armies. Unfortunately, the designers at Maxis left out the "Build Moat" tool, as the closest thing I could get was to build a tiny pool around the perimeter. I also learned that making a pool was quite expensive, so I gave it up after awhile and just put a picket fence up ("White picket fences - the poor man's moat"). To frighten people away from trying to burglarize my house, I dug a ditch in the front lawn and threw some flowers around it so it'd look kinda like a cemetery plot. This, no doubt, would scare away even the most sociopathic of criminals. Since my characters would would be extremely antisocial and desire to be free of obnoxious neighbors, I put some bright yellow wallpaper on the outside of my home, which should cause permanent eye damage to any fool stupid enough to get within a 100-yard radius of the house. I figured that these were enough natural defenses to sufficiently fortify my home from unwanted intruders, so I then began to fill the inside with furniture.

Just like the structural layout of my home, the inside took much work and planning. I filled the interior with such critical items as coffee makers, a refrigerator, a sofa, a black and white television, and various other things which cost too much. I attempted to create a wrestling mat where the Felchers could relax by performing their favorite WWF moves on each other, but the game never gave a "wrestle" option, so I lost about 50 bucks building it. For shame, Maxis! After buying everything they could possibly need, I let my family, Stabs and Porsche Felcher, move in and begin their meaningless and hollow lives! 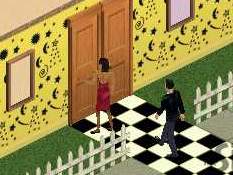 Betty and her abusive husband have to show up every five minutes. I got the husband to scram, but wasn't so lucky with Betty.

Stabs Felcher, the man of the family, reacted by quickly running to the bathroom, thinking about the mirror, and clapping. I'm not exactly sure why he did this, but I think its because Stabs is a man of immeasurable mystery and intrigue. Nobody knows the true Stabs, and nobody probably ever will. Porsche, on the other hand, decided to grab a book from the bookcase and start reading. She is truly the pillar of the Felcher household.

Unfortunately, neighbors had to choose that moment to show up and ruin Stab's little solitary hoe-down he was having in the bathroom. I tried to command Stabs to run to the door and tickle the woman who showed up, but instead he walked to the living room and turned on the television. Since Stabs obviously wasn't into the company, I commanded Porsche to start a fight with the woman, who was named Betty (I later grew to hate and despise Betty's mere presence). After talking about planes, soccer, and cars, Porsche eventually attacked the woman and they began to lock arms. Yay, the game was finally getting exciting! However, much to my dismay, Porsche gave up fighting after a couple seconds, and the idiot ladies started to talk about soccer again. This was unacceptable, so I commanded Porsche to make the woman leave, which she did.

At that point I realized that the Felchers had no money for food, something which I was almost sure was a critical key to a simulation. I had so foolishly squandered their entire savings on yellow wallpaper and ineffective moat-like entities designed to repel the neighbors! As a result, I was forced to sell a bookcase for $200, which my family used to immediately teleport food into the refrigerator. While the Felchers sat down for dinner, some random guy wandered into the house and began walking around. I don't know what world the Maxis employees live in, but in my neighborhood, people who wander into your house are often shot repeatedly for sport. I commanded Stabs to insult the man, and the intruder began to cry. Then they started to talk about soccer again, and all was lost. Once I was able to kick the guy out of my happy home, I realized I had forgot to put in a door to the backyard. Ah well, that's just a trivial detail, real families don't need little pussy things like "doors" and "proper waste disposal". 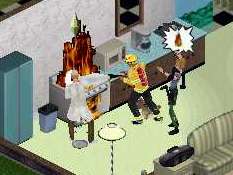 Dammit Stabs, you caught the kitchen on fire again. Good thing Porsche ran out of the bathroom to hang around and make little fire comments.

Soon Stabs began to whine about having to pee, so I commanded him to use the bathroom. This is when I noticed how absolutely fucked up the time scale is in this game. Look at the pictures of the inside of my house and explain to me why it takes over 15 fucking gametime minutes to walk from the kitchen to the bathroom! Yes, Stabs and Porsche apparently have the raw acceleration power of a carpet factory, as traveling to the bathroom four times takes well over an hour of gametime! I assume this is used to penalize the player for asking their characters to move around the house, so next time you start up a game of "The Sims", make sure your home is at most 16 square feet in size.

As money was getting low and I was running out of bookcases to sell, I soon realized I needed to get the Felchers some jobs. Porsche was able to secure a position as an Army recruit, and Stabs grabbed a position as a medical test subject (his dream job). After a hard day of work (I assume), they both came home about $400 richer. I used this cash to buy a back door. Stabs started to cook some food, but the stove caught fire and he began to panic like a little moron. Porsche, sensing the possible destruction of her home in a fiery inferno, shrewedly decided to run to the bathoom and use the toilet. I find it refreshing that Maxis finally has the guts to admit women have a weak bladder and want to urinate at the first signs of danger. A fireman broke inside the home and put out the fire while Stabs looked on like a hyperactive idiot. To celebrate not dying, Stabs and Porsche started dancing for no readily apparent reason. Everything seemed to be going well again in Simland, and I just waited for them to start talking about soccer with the fireman.