If you haven't already noticed, the Internet isn't in the best shape right about now. Newspapers across the country sport clever headlines like "SITENAME DOT COM DOT BOMBS!" as literally hundreds of hopeful Internet startups go belly-up. The past couple years have been great for us Americans, as a strong stock market has helped the economy and all that financial junk. But that's over now and we need something else to keep us all employed, fat, and snooty. Our newly-elected President knows that, and that's why he's going to do what his father did, what F.D.R. did, and what that guy with the funny wig did: he's gonna start a war with another country! Nothing spurs on the economy quite like pumping bullets into some un-American foreign menace.

U.S. apology swift after sub hits boat - As you can see, we're already off to a good start. An American 7,000-ton Los Angeles-class nuclear sub "accidentally" surfaced right under a Japanese fishing research ship, busting up the damn thing and throwing about 30 crew members and student researchers into that big ocean that 17th century pirates loved to piss in. Now I'm no expert on submarines, but I have seen "U-571," "The Hunt for Red October," and that movie where Gene Hackman throws a hissy-fit because he keeps running over cute tropical fish due to his poor submarine steering and tries to launch nuclear missiles at the moon while his face contorts into a indecipherable mass of fleshy, gooey, chin fat. So it's safe to say I can comment on this situation with a great degree of accuracy. 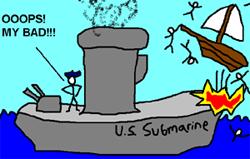 Artist's rendition of the accident. Not based on thousands of eye-witness accounts and charts.

First of all, you may be wondering what a "Los Angeles-class" submarine is. Simply put, this is a submarine that is completely staffed by graduates of the Los Angeles Public School system. This means all of the sailors on this vessel are:

This may explain why the submarine's periscope wasn't able to see the fishing boat on the surface above, since it is very likely that the crew had ripped out this unnecessary luxury in order to put it to better use as a "really cool bong."

It's also very likely that some of you foolish tonsil-faces don't know exactly what happens on a Japanese fishing research ship. Well everybody knows that the Japanese had no use for fishing research until very recently, since they would export game consoles and videogames to America in exchange for a wide variety of seafood, including tasty toxic-chemical-flavored Lake Erie Bass. However, Japan's economy isn't so great now either, so they're currently in the process of conducting a multi-million dollar research project to discover the best way to take a fish from the ocean, torture it to death, and then sell it to hungry Japanese businessmen.

Unfortunately, the Japanese researchers have hit two very significant roadblocks. First off, Japanese businessmen are far too busy molesting 12-year-old schoolgirls in cheap love hotels and don't have enough extra time in their busy day to buy food that doesn't come out of vending machines. Secondly, the researchers haven't figured out what makes good fish bait. The Japanese have no soil left - it's all been paved over or turned into monorail tracks - so they've tried feeding the fish old electronic watches, pieces of Toyotas, and X-rated anime alien rape Sega Saturn games, but nothing seems to work very well.

So it makes a lot of sense that George W. Bush would order a submarine full of L.A.'s finest to attack this Japanese fishing research vessel because a little dingo told me that researchers on this ship were getting dangerously close to discovering that you don't need bait to catch fish; all you needed is a callous heart and a big-ass Dolphin-stranglin' net. And if the Japanese discovered how to fish, we'd lose access to their three most important exports: videogames, Iron Chef, and anime torture comics. So we busted a Pearl Harbor on them first and now they'll no doubt launch a massive counter-attack and nuke us into the ground. Hooray for the economy!

And while us Americans are off attacking the country that invented toy robots which transform into dinosaurs and cars, terrorists with goofy-ass names are planning dastardly schemes of their own… IN AN AOL CHAT ROOM NEAR YOU!

Report: Bin Laden uses Web to plan terrorism - This article, accompanied by a totally retarded picture of tanks emerging from a monochrome mid-80's IBM monitor, claims that some Muslim extremists are organizing terrorist attacks with the aid of Yahoo Chat Groups:

"The paper said weeks of interviews with U.S. law enforcement officials and other experts disclosed details of how extremists hide maps and photographs of terrorist targets in sports chat rooms, on pornographic bulletin boards and other popular Web sites."

Now this is totally ridiculous, right? Well, maybe not. Check out this post I found on ESPN.com:

Pretty suspicious looking if you ask me! Hmm… and now that I think about it, perhaps Semi Automatic Turban and Taco The Wonder Dog are distributing secret terrorist messages via that wacky music Flash unreadable text of theirs… no wonder nobody can understand or translate any of that stuff - it's all encrypted!

Remember, you heard it here first: America versus Japan in "Operation Desert Storm II." This summer. Be there!