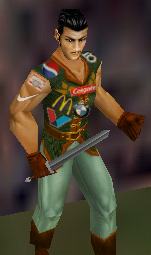 Okay, it's common knowledge that the more "hardcore" fans of epic roleplaying game Everquest aren't exactly the ripest peaches on the fruit farm. In fact, they're more like the unidentifiable piles of brown and chunky waste product that festers in rancid lumps under the tree. You know, the clumps of sticky, vile, odorous mystery substance which could be either rotting fruit or something a dog with severe bowel problems left after eating rotten fruit. And then you grab a really long stick to poke it and hopefully scoop some up so you can flick it at a friend, but upon removing the stick from the pile of brownish substance, you notice a long green streamer of goo hanging off and trailing back to the mess? What was I talking about again? Oh yeah, Everquest.

Anyway, self-professed "Everquest Victims" are apparently planning for a demonstration at the upcoming Baltimore EQ Fan Faire in... uh... Baltimore. In case you've never heard of Everquest before (or you have wisely chosen to ignore it), EQ is a game where people, who have grown tired of sitting around in their room or office all day doing nothing, can pay Sony $10 a month to sit around inside their video game all day and do nothing. It's the ultimate escape for people who are unable to relate to other humans in real life because EQ addicts generally have the social skills of rabid, crippled wolverines.

So basically what this all boils down to is a gigantic powder keg of antisocial nutballs who spend 99% of the day playing EQ and the other 1% flaming Verant on public forums for making Iskar Necromancers too weak / too strong and how the 64th level Warmonger of Paladinian Freeport Ringbearers United 154th Union doesn't drop loot good enough to justify killing him and how they need more benefits from training in 1H blunt with an emphasis on divining or conjuring or masticating or demolitions whatever the hell they study. To them, Everquest is a religion... except with one major difference. In most religions the followers unquestioningly follow every word preached by their leader; in the EQ religion, they can't stop bickering over every word. No matter what changes are made, the EQ zealots can always point out hundreds of reasons why the changes suck and how their life is ruined and if they had strong enough arms to force their fat ass out of their chair, they'd go and get some titanium-reinforced rope to hang themselves with. DISCLAIMER: Not all EQ zealots are fat. Some are morbidly obese.

Anyway, a new faction of EQ weirdos has recently sprung up like a case of chronic heartburn: the Ex-EQ Nutballs. These are the people who used to be EQ nutballs until some catastrophic event occurred in their lives, causing them to question the validity of camping pixelated shoes for 40 hours straight. Some of these people once had a wife, kids, and a prosperous job. However, as soon as the EQ bug bit them, they gave up reading work memorandums for "WTB 1HS or 1HB 4 OG WAR PLZ TELL @ 2 HUT PLZ SOW 2 THX : )" messages all day. They realized that in real life they were just another identical face in a crowd of clones. By logging onto Everquest every day, they were given the freedom to be another identical face in a crowd of clones... only they now they had a FLAMING SWORD. But alas, the unadulterated bliss of grouping with 30-year old men pretending to be 18-year old women pretending to be 22-year old Wood Elves eventually came to an end, and they realized that the copious amounts of time and money they put into Everquest has resulted in essentially nothing. All those hours and hours of trying to level up and get better equipment so they could impress a newbie 14-year old kid with ADD logging in from Sudan were just a waste of time.

These Ex-EQ Nutballs are now going around preaching about the evils of EQ and how it can turn man against man and man against rent collector. While I have no problem with people pointing out how utterly insane it is to be addicted to EQ, I can't help but think their cause is futile. You see, there's no way to communicate rationally with Everquest fanatics. It's impossible. They don't think like we do. Even their timetables are screwed up. If you ask an EQ Nutball when they want to go eat, they give you an estimation based off the predicted time of monster respawning they're camping. If you wait it out and eventually convince them to logoff, you always go end up going to McDonalds because it's the cheapest and EQ Nutballs are always broke. Then, while there, all they do is whine about changes Brad / Gordon / Alan / whoever the hell is the current devil made. They literally never stop talking about Everquest. Ever. You could pull out a hammer and break open their skull and their dying words would be "tell my guild I won't be able to make it to the meeting tonight." These people are lost causes and all the demonstrations in the world won't help them realize this. If you know a friend or loved one who is hopelessly addicted to EQ, to be honest, your only option is breaking their skulls open with a hammer and freeing the daemons trapped inside. If you record one of their conversations with you at McDonalds, no jury in the world would convict you. 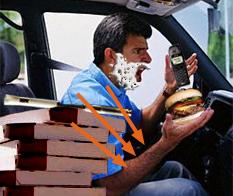 Not content with merely distracting people trying to drive their mammoth 60-ton SUVs while conversing about Aunt Betty's wacky colon on their mobile phone, the cellphone industry is now looking at streaming movies over cellphones. Yes, movies. Over cellphones. I don't know why anybody needs or would even want movies over their cellphone, as they'd probably end up being 99% ads for the cellphone company, but hey, nobody said technology had to be useful. We can't even successfully stream movies to the majority of the people on desktop computers, yet companies are already thinking about movies on phones. Companies are simply trying to move too fast and be the "industry leader" in areas of technology that are just not needed. Remember the great big Internet Gold Rush of the mid 90's? Where anybody with any idea that included the prefix "e" or "cyber" would instantly be given $50 million by an old white banker? Look where all those ideas have gone. Pseudo.com, the industry leader in proclaiming themselves to be industry leader, put all their money on streaming media and went tits up months ago. Pets.com, which had the ingenious idea of offering a service that nobody in their right mind would ever use, turned into big bowls of dust long a few months back. Just like the company trying to stream movies onto phones, they were both simply going after a technology or service that was untapped... but they never realized that it was untapped for an obvious reason: nobody wants it. I don't think we'll ever get over the "HEY LOOK, IT'S TECHNOLOGY!!!" business outlook, but I hope to God that it doesn't result in my being run over by a soccer mom who's trying to drive her SUV and adjust the tracking for the copy of "Titanic" she's watching on her cellphone.

Free Sex and No Rent

Your typical romance story: pedophile meets girl on Internet, pedophile sneaks over to girl's house and avoids parents, pedophile lives in girl's closet for three weeks before being discovered. I think I saw that movie with Tom Hanks: "You've Got Male" (yes, I am aware I used this joke in the past but I rarely ever come up with witty material so give me a break). Anyway, some Army clown went AWOL and decided to move into his 15-year old lover's closet until he was discovered by her mother. Apparently the guy had a set of dishes, pillows, and blankets inside his love shack, bringing up the obvious question: how fucking big was this kid's closet? That's got to be one huge storage space to be able to hold a grown man, his collection of dishes, and sufficient bedding material. If I was the mother, I'd look into suing the home's architects because it's obviously their fault for being so nearsighted and failing to realize that they neglected to pedophile-proof the place. Look for the day in the near future when these stickers are placed in your new home's closets:

Guess What? Cliff Yablonski Hates Us!

Gee, Cliff doing an update on Monday? Like he's been doing for the past four million months? Say it ain't so! In addition to Cliff updating his site with six new pages of people in the Appleton City area he despises, I have also taken the liberty of redesigning his site so it's easier to get around (and it also has the right eFront Carousel of Advertisements bar which I am kind of obliged to put on all pages under threat of being Gamefanned). Anyway, here's the email that wacky old bastard sent to me this morning.

From: cliff yablonski
Subject: No subject

I would thank you for redesigning my site, but it looks like shit so I wont. I have updated it with six new pages of people I hate. write about that on your program or beat your ugly mug in with a wrench.

You know what you gotta do... check out Cliff's latest gallery of victims!

Bjørnar B., who people either seem to love or hate (like every hosted site on SA), has updated with two new drawings and more information regarding his upcoming line of bjørnarwear shirts featuring "Fat Uncle Jubalon." No, I don't know who the hell "Fat Uncle Jubalon" is supposed to be. For that sake, I don't know why the hell Donald Duck is shown turning "a seagull into a small man by only using one spell", but I guess that's just the wonders of Bjørnar B., isn't it? See Donald as you've never seen him before... on crack!

In celebration of Cliff's new site design and update, guest contributor Al has provided us with a "You Don't Know Cliff" quiz which will test everybody's knowledge regarding their favorite elderly West Appleton resident. For example, did you know this?

Cliff Yablonski is the first to admit that he neither understands nor cares about the Internet at all. "I don't know jack shit about computers and all that dumb crap. What the fuck is a 'web-site' anyway? As far as I can tell its like some kind of TV except with typing and shit. Computers are for lazy slobs who don't want to do any real work", he confides. "They just sit on their pasty flabby asses all day and send each other 'electronic mail' and 'microchips' and shit like that. Fucking losers. "And I heard there was porn on the Internet, but when I did one of them 'web-searches' all I got was some fat ugly woman with piles trying to mount her dog or some disgusting shit like that. And then when I tried to record it, the fucking cassette wouldn't fit through the slot in the front of the computer. I mean what the fuck?"

Okay, so I just gave away one of the answers. Fortunately it's late and I don't care. Head on over and rack your brain with a hefty dose of Yablonski trivia!