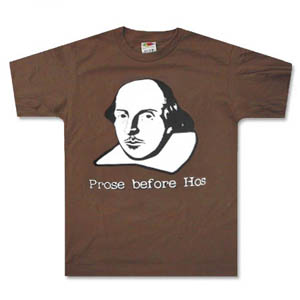 This curious beast is known for its nurturing instincts. It flutters to the nest of its wearer during uncomfortable social situations (which, for most clever shirt wearers, means all social situations) and gently regurgitates a pre-chewed personality into his mouth. This surrogate personality contains ground up bits of jokes written neither by the wearer nor, in all likelihood, by the manufacturer of the shirt. These wormy morsels of humor, though in a barely-recognizable state, can provide enough social nourishment to sustain the wearer through a few hours of stilted conversation. 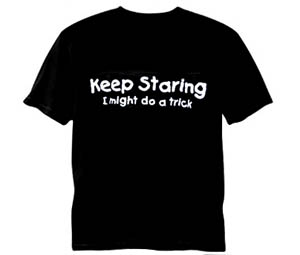 A parasite that infects the weak and stupid, the idiot shirt prays upon the insecurities of its master and compounds his internal idiocy into something far more vile and pathetic. Generally worn by those unfortunate souls who are so far gone as to think wearing a shirt that essentially says "I look like an idiot and I beg for your acknowledgement" is somehow a powerful statement of individuality, these shirts are a depressing reminder that some people are unwilling to make even the feeblest grab at dignity. "You laugh because I'm different," these wretched creatures mewl. "I laugh because you're all the same." Translated into human speech, the phrase reads: "you laugh because I look like an idiot. I laugh because I am an idiot."