Playable Female Characters Are Too Much Work for Big Budget Games

Half the people who play video games are female. Maybe ten percent of all games feature women as playable characters. That figure could go as high as eleven percent if the protracted lawsuit to canonize my Tetris fan fiction pans out.

Making more games that are explicitly about women, or that give players the option to choose their gender and appearance seems like a good thing for everyone. More variety, more inclusiveness. More walking atrocities when we are given the ability to adjust individual facial features. There is no downside. Every year the white dude with a gruff voice seems increasingly obvious and ridiculous as a go-to protagonist. 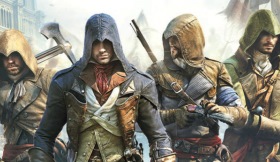 Dude.This week at E3, a trailer for the newest Assassin's Creed game featured the same climbing and stabbing and icon collecting you've seen in other Assassin's Creed games, now in a different location with better textures. It also teased co-op with three other players. All of which happen to be dudes.

People started to wonder why one of the four playable murder buddies couldn't be something other than a white male. This, and the larger issue of player representation, became a pretty active topic within hours. Not just among a handful of gross nerds like me, but between a lot of normal people as well. Soon the game's creators felt they had to respond.

The reason you can't play as a woman, they explained, is that it would take far too much work and too many resources for their 700-person studio assembly line to implement. They would have to make character models, like the ones that had been made for the non-playable women already in the game. They would have to implement a new set of animations, even though a former employee pointed out that motion capture sessions with men and women revealed very little difference in their movements.

No one believed any of the above. Instead of admitting that they simply didn't put much thought into the issue, the Assassin's Creed devs fired off even more excuses for not including playable women. Do any of these sound plausible or even make sense?