My Review of Watch Dogs

Watch Dogs has been hyped as the first true "next-gen" title by the insufferable people who make those sorts of claims. Early trailers portrayed a dense, atmospheric rumination on technology with an emphasis on non-violent player creativity. Now it's time to find out what the game actually is.

Ready for something different?

You play as Aiden Pearce, a white man in his thirties with a gun. Whether he's threatening a bad guy or consoling a loved one, Aiden sounds like Batman practicing his raspy growl in a library.

Yeah, but are you ready for something really different?

Looming over a beaten man, your first interaction in the game is to aim your gun at the unarmed guy and pull the trigger. 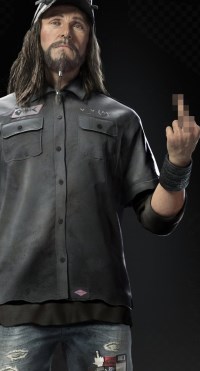 So much attitude they had to blur it. Except for the second one on his jeans. Take that!Soon there's a car chase. Oh boy. You need to lose the cops by driving fast and making unpredictable turns. Within seconds multiple cars slam into one another, knocking a weightless telephone pole onto the street. Everyone stays absolutely still until one car randomly speeds forward then backwards. At this point in real life your spirit should float to the ceiling and look down sadly, watching your stupid body go through the motions in yet another one of these games.

Okay, I promised something different.

Aiden has an evidence wall. There are photos and ominous words and lines and even circled things. He is out for justice.

Something different. Okay, what about this?

Aiden has a nightmare about a dead female. This is what fuels him. Justice and payback and self-angst.

The nightmare is Aiden's memory of the night his niece was murdered. A hitman had been ordered to kill the girl in order to scare Aiden off from doing more BIG HACKS. The assassin's plan? Get on a motorcycle and sort of bump into Aiden's car while yelling, then shoot a tire to flip the car, killing the girl but leaving her uncle alive. A very simple plan with only one possible outcome.

Or maybe the killer was trying to murder Aiden. I don't know. An earlier scene showed a client telling the assassin to take out Aiden and kill his family, with the ultimate goal being to "scare them". If "them" meant either Aiden and his partner or Aiden's family, how would their deaths be step one in a two step plan that ended in them being scared?

Anyway, Aiden wakes up. While gargling sandpaper he talks about his inability to escape the memory of his niece's death. The final overwrought sentence of this monologue has not even ended when the game pops up a "1911 Handgun Unlocked" message.

You look at a map of the city and feel a thrill as it becomes populated by a ton of icons. This sensation is a bigger high than anything you will experience while carrying out the activities those icons represent. There are outposts, things to stand on and press a button to collect, racing missions that highlight the abysmal driving model, and bad guys to observe - don't let them see you or the mission ends - then run after on foot. The game asks you to do each of these things until you get tired of them, then do them an additional fifteen times. Gotta have a lot of icons on that map, after all.

Well, the game doesn't have the movement speed or vertical freedom of Assassin's Creed, the physics goofiness of Grand Theft Auto, or any of the hand to hand combat you'll find in Sleeping Dogs. Even though there's a lot of shooting it doesn't have the satisfying gunplay of Far Cry 3. Playing this game feels like being held at arm's length from anything you might want to do. Watch Dogs does have hacking, though. That's sort of the selling point, right?

Point your cell phone at a person to see their profile and a little portrait. No matter what their age may be, everyone has the face of a beautiful middle-aged Oblivion orc.

Profiles are randomized and offer absolutely nothing. After the first few minutes they become white noise. Of course. In a game that takes place in a large city there's just no way to make enough unique profile variables to justify their existence. So why have them at all? If you haven't played an Ubisoft open world game you might not know this, but it's more important for something to seem impressive than to actually be meaningful in the way that it suggests.

Point your cell phone at an object. Hold X to hack, toggling the thing on or off. That's it. The outcomes are very limited in scope. Hack a distractionary object to make people 10 feet away look at it for a few moments. Hack an exploding thing to make people right in front of it die. The most dynamic hack in the game is a traffic light, and that just causes an accident which occasionally stops your pursuers. In practice there's very little variety or room for player creativity.

Stealth, the most potentially interesting mechanic, is hobbled by the rigid hacking system. Restricted areas are confined and packed with way too many guards on short patrol routes that don't offer opportunities to sneak past cleanly. You're forced to hack a few obvious spots in the environment to get by without fighting, and it's often easier to just hack a camera to locate and activate your goal remotely. Sure, the latter is conceptually sort of cool, but why have stealth at all in the first place if it isn't more engaging than the shortcut?

One virtual reality stealth mini-game features enemies who spawn in large numbers by dropping from the sky, often landing close enough to spot you immediately. You must reach a generator and disable it, then travel a fair distance across the city to the next generator so you can repeat the process. Twenty times. That's Watch Dogs in a nutshell.

Watch Dogs is all bluster. It has nothing to say about its themes or its all-too-familiar characters and the tiresome plot things they do, nothing to offer the player, nothing to prop up its expansive but hollow facade. It will be a tremendous commercial and critical success.