To the best of my recollection, I have never been stabbed by a gang member.

I've had my fair share of wild nights like anyone else. I've gone overboard at parties, eating a few too many cocktail shrimp and miniature hot dogs wrapped in croissants, stumbling off to the host's bedroom to nap my stomach ache away. In the cold light of day I have gingerly prodded my memory, only to find that the night had been lost in a haze. It's possible that I was stabbed by a gang member during one of these irresponsible nights of debauchery, but it's not likely. My friends would have said something. I would have had a hole in my shirt.

Not having been stabbed by a gang member is easily one of my greatest accomplishments. People who know me well often tell me that it's my defining characteristic. When they think of me, which is rare, it's the only thing that comes to mind. What's my secret? 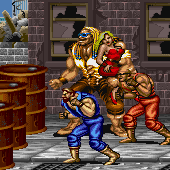 When I was a young lad I overheard some older lads at lad school casually discussing something frightening. They claimed that gangs (violent due-paying organizations made up of scofflaw lads and lasses) were driven into stabbing frenzies by certain items of clothing. Anyone that wore the wrong outfit in the wrong part of town would be stabbed, even if they weren't in a gang.

Why does this happen? You see, gangs have costumes. They like to dress up and match, then concern themselves with what other people are wearing and obsess over nebulous territory that they don't actually own or make better in any tangible way. They do these things because they are true signs of strength. No one in their right mind could possibly confuse any of those activities for being easy, short-sighted, or weak.

Rival gangs tend to set themselves apart from one another with different outfits and color schemes. This helps everyone quickly identify who to stab, which is a boon for everyone involved. It's not so great for a non-gang member, though, who might get stabbed for accidentally wearing part of a gang's uniform. I'm not sure if you're more likely to get killed for wearing an outfit that makes you look like a member of a rival gang or for wearing something that makes you look like an impostor. I have reached out to several gang websites to get some clarification on this ruling, but I have yet to hear a response. Either way, it's best to simply avoid gang clothing altogether.

And that's my secret. That is how I am able to have a chalkboard in my home that reads "x Days Without Being Stabbed By A Gang Member", where x is the number that I adjust every day. I simply don't wear anything that can be confused for gang-related clothing.

Unfortunately, this is more difficult than it might seem. This town has so many gangs. A perfectly safe outfit in one part of the city could get you stabbed in another, forcing you to take an eraser to that chalkboard in your home. Even worse, these gangs don't bother to provide basic information to the public such as their official team colors and accessories, or the boundaries of their territories. I hate to say it, but gangs are sort of inconsiderate.

Every time you step outside while wearing clothes you run the risk of being stabbed by a gang member. It's horrifying, but as long as you remember to dress appropriately you should be fine.

If you're heading to Violence Row, watch out for:

The primary gang, Snake Lion Devils, whose outfit includes orange slap bracelets, those weird shirts that change colors when you put your hands on them, and E-Cigs.

Visitors to The Bad Side Of Town may come in contact with:

Scofflaw Soldiers, who dress up in purple berets, hair pulled back in stringy ponytails, and jean shorts with curious stains on their crotches.

Their rival gang is Psycho Weedheadz. These guys and girls are bad news. Try not to wear a baby blue tuxedo, Vibram five fingers sandals, or a big honkin' battleaxe, or you might be mistaken for a Psycho Weedhead.

Commuters who travel through the financial district will surely pass by Switchblade Alley. Be avised that the place is crawling with the following gangs:

I don't know why anyone would need to visit The Grumpy Quarter, but watch out for trouble from:

The biggest gang in the city, Syndicate Corp. They will have dyed mohawks (green), impossibly nice designer business suits, and potato sack pants held up by syrup-drenched lengths of rope.

Their rival gang is an upstart, but its members have grown increasingly unhappy and dangerous with each passing year. Fans Of Sons Of Anarchy can be spotted by the bandanas wrapped around their heads, sleeveless biker jackets, and their dejected expressions.