Saturday, Oct 25, 2003 by Zachary "Spokker Jones" Gutierrez
For over half a century television has delighted billions of viewers across the globe. With over 300 channels of slightly below average entertainment there is absolutely no reason to go outside ever again. Many of the problems Americans face with obesity can be attributed to the idiot box. Along with the growing trend of fat asses standing in line at the grocery store with bags of chips, two for a dollar, under each arm, there is another ever increasing epidemic. Televison is making us stupider. To really understand this problem one must look at the internet's numerous film and television forums. We did just that in this special report.

"Darkeyez" has absolutely no clue what he's talking about. A huge roll eyes goes out to that dummy. 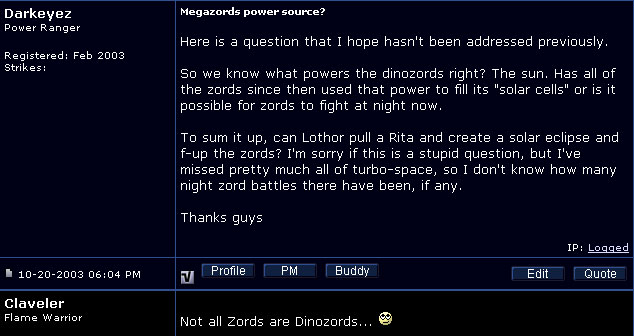 I will never forget that defining moment when Zack uttered the words, "Let's go dudes!"

I havn't seen either shitty movie so I can't really comment.

For the love of god get that Alf image on the internet AS SOON AS POSSIBLE. The fate of your children depends on it.

"Chris Burian" is about to break.